Lehigh’s connection to China dates back nearly 140 years. In fact, the first Chinese students enrolled at Lehigh in 1879—just 14 years after its founding—and over the course of its history, more than 3,000 Chinese undergraduate and graduate students have attended the university.

Now, as it continues to expand its global footprint and international impact, Lehigh is pushing forward on several initiatives to strengthen its relationship with its current stakeholders in China—and develop new ones, too.

Earlier this month, members of Lehigh’s senior leadership team, led by President John D. Simon, traveled to China for a week-long trip that saw them engage with Lehigh’s substantial and growing Chinese alumni base and meet with top officials from some of the leading universities in China.

Simon says he expects the trip, which saw Lehigh establish a new partnership with Tongji University in Shanghai, will eventually lead to several additional initiatives with institutions throughout China, a country that is quickly establishing itself as a major center for higher education leadership.

“Our international strategies are central to the goals contained in the Path to Prominence,” Simon said. “We believe that a Lehigh education should prepare students for the increasingly global and complex world they will navigate, and we are proud to say Lehigh is now a more global campus than it has ever been. Our ever-expanding efforts in China are emblematic of our broader focus on creating a university of truly global impact.”

Cheryl Matherly, Vice President and Vice Provost of International Affairs, added: “The purpose for the trip was to evaluate Lehigh’s long-term China strategy. This is important because China is a significant player in global higher education, and we have some long-standing, significant relationships.”

Joining Simon and Matherly in China were Stacy Burger, Director of Global Partnerships and Strategic Initiatives, and Yuliang (Oliver) Yao, the George N. Beckwith ’32 Professor of Information Systems and Associate Dean for Graduate Programs in the College of Business and Economics. The group spent a busy week in China, including stops at the Hong Kong University of Science and Technology, the East China University of Science and Technology, East China Normal University, Renmin University and Peking University, along with Tongji.

At Tongji, the Lehigh group formalized a new Memorandum of Understanding (MOU) that will create a dual-degree master’s program between Tongji and CBE. That initiative builds on Lehigh’s existing partnerships in China, which include student exchange programs, travel grant programs, study-abroad/internship programs and a visiting scholars program. These initiatives extend to fields and disciplines across the university—from chemical and civil and environmental engineering to modern languages and literatures and earth and environmental sciences, among others.

“In terms of global economics and politics, China is extremely important, so creating opportunities for our students to learn more about China is an important area for us to focus on,” Matherly said. “Also, you cannot lose sight of the fact that China is now where some of the best universities in the world are located. The investments being made by the Chinese government into growing world-class institutions are substantial, and this means that on the global stage, Chinese universities have a lot of influence.”
Matherly said the creation of new partnerships, study-abroad programs and other agreements will continue to be an essential part of Lehigh’s China strategy going forward. But she added that one of the most heartening aspects of the trip was the strong turnout the Lehigh group saw for a series of three alumni events—one each in Hong Kong, Shanghai and Beijing. In all, the events drew more than 250 Lehigh alumni, a testament not only to the university’s extensive history in the country but also the strong connection those alums continue to have with Lehigh.

Speaking to the alumni groups, Simon said he was deeply appreciative of their ongoing loyalty to their alma mater. He noted that the university is in the midst of a major growth initiative, the Path to Prominence, and has also just launched GO: The Campaign for Lehigh. Alumni support will be essential to the success of both initiatives, Simon said—and that includes overseas alumni.

“We would not be able to move forward on our shared goal of creating a more dynamic and impactful university without the engagement of our proud Lehigh alumni,” Simon said. “We are excited to be building the Lehigh of tomorrow, but that vision will only come to fruition if we can harness the pride, loyalty and ambition of everyone in the Lehigh family—from our alumni making an impact in the Lehigh Valley to those serving as brand ambassadors for our university in every corner of the globe.”

Matherly echoed Simon’s comments, and said Lehigh would continue to find new ways to engage with its Chinese alumni, parents and students.

“We have a lot of people in the Lehigh network over there, and it’s a group that is really looking for ways to engage with the university. So one of the things we’ll be looking at is being much more intentional about how we can be involved with our Chinese alums,” she said. “It’s much the same with our Chinese families—we have over 650 students here from China right now, but we also know that these families, for the most part, have not been able to come here to campus. But the students are here because their families know Lehigh is a great place to send their sons and daughters. So we have an obligation to support those families.” 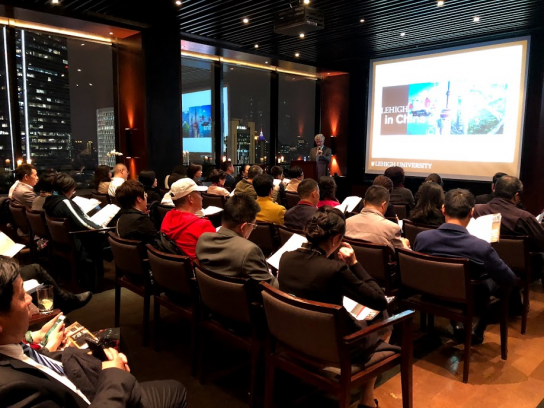 During the week-long trip, the Lehigh leadership team met with more than 250 China-based alumni. 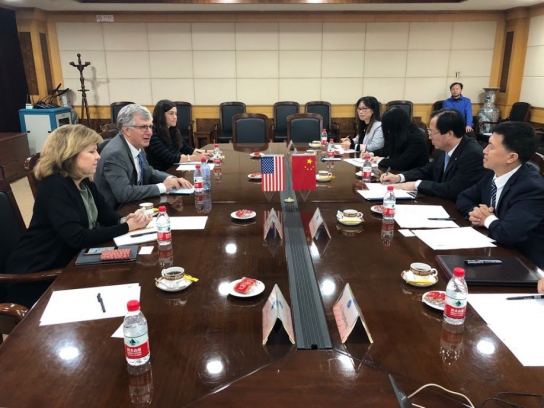 Already deeply engaged in China, Lehigh is now exploring new partnerships and initiatives with some of the country's most prominent institutions.

Lehigh In China: By The Numbers

15: Number of decades that Lehigh has enjoyed a relationship with China

3,000: Approximate number of undergraduate and graduate students from China who have attended Lehigh

1901: The year that Te-Ching Strong Yen became the first Chinese graduate of Lehigh. He would go on to become one of the most distinguished railroad engineers in China.

1909: The year that Lehigh’s Chinese students founded what is believed to be the first Chinese Students Club in the United States