When members of the Lehigh community gather in New York City next fall to watch Lehigh take on Lafayette in Yankee Stadium, they’ll be treated to more than the 150th meeting of the nation’s most frequently played college football rivalry.

On Friday, November 21, 2014, the night before the Big Game, the singers who make up Lehigh University Choral Arts will perform at one of America’s most prestigious concert venues—New York City’s Carnegie Hall. Accompanied by a full orchestra, Choral Arts will present Carmina amoris, a choral symphony composed by Steven Sametz, the Ronald J. Ulrich Professor of Music and director of Choral Arts. The nearly 300 singers and players will be directed by Sametz.

“When we take stage, we will show ourselves, in important ways, to be what we always are: singers coming together from all walks of life, all majors in the university, at levels from beginners on up, engaged in the common pursuit of making music at the highest level possible,” says Sametz, who is now in his 35th year at Lehigh.

The Carnegie Hall performance will be an important milestone for the Choral Arts. Choral singing, beginning with the Glee Club, Lehigh’s first organized singing group, has been one of Lehigh’s long-standing traditions and will celebrate its 145th year in 2014.

The Lehigh community will host a number of festive events during The Rivalry weekend, including the Carnegie Hall performance. The celebration begins on Thursday, November 20, when representatives from the Lehigh and Lafayette communities will ring the closing bell at the New York Stock Exchange. The symbolic gesture serves two purposes: the formal closing of the day’s trading session and the official launch of Rivalry Weekend.

Registration for the weekend’s activities opened May 1. For more information, visit lehighsports.com/rivalry150. 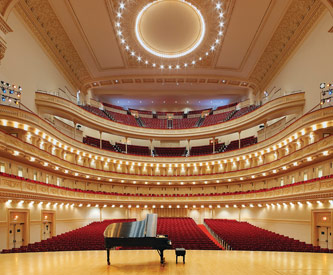