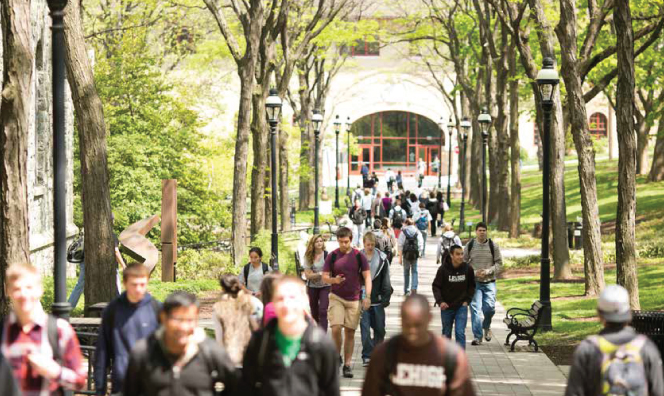 The wide-ranging survey will be the first campus-wide climate survey in nearly a decade.

In an effort to take stock of the university and the progress being made in many areas related to diversity, Lehigh will be implementing a campus-wide survey of all staff, faculty and students that will begin Oct. 12. and run through Nov. 10, 2015.

The Lehigh Survey is designed to collect the experiences, opinions and beliefs about the campus community, according to Karen Salvemini, Lehigh’s Equal Opportunity Compliance coordinator. It is the first time in nearly a decade that such a climate survey has been conducted at the University.

Salvemini said that the impetus for The Lehigh Survey was the September 2014 Voluntary Resolution Agreement that Lehigh entered into with the Office for Civil Rights (OCR) of the U.S. Department of Education. The agreement was the resolution of a Title VI complaint regarding the defacement of UMOJA House that included racist graffiti.

Among the Voluntary Resolution Agreement’s requirements is a provision that Lehigh conduct a climate survey annually for at least the next three years. Salvemini said that the survey will help the university “take stock of where we are in terms of the presence of harassment on campus and the effects of that harassment. The data that is generated can then be used to formulate responses to those issues.”

The intersection of “real life” and scholarship

Even as the events of Fall 2013 that led to the OCR agreement were unfolding, faculty in Lehigh’s psychology department specializing in the area of social psychology were discussing and trying to make sense of the behavior.

“We all have scholarship we do on our own, but we share interests in the areas of stereotyping, prejudice and discrimination,” noted Associate Professor Dominic Packer. “We meet every week and, because the events on campus were a natural fit to what we study, it became a topic of conversation.”

As social psychologists, Packer said, “We all want to know what is going on: what drives the behavior, how do we understand reactions to it? We have different perspectives and approach it from different angles in our research, but there’s a common thread.”

Assistant Professor Christopher Burke said conversation soon turned to how they might help improve the campus climate by studying it and understanding it better. “We could offer our expertise while also having the opportunity to see things we study in our labs unfolding in a real life context that’s very important to us, that is, the place where we work and spend so much of our time.”

When OCR included a climate survey as part of the agreement, the social psychology faculty group saw their opportunity to make a contribution. “We contacted Jennifer Jensen (Vice Provost for Academic Affairs), and she thought it was a great idea,” Burke recalled. “She was concerned with burdening us with the responsibility, but it was something we all really wanted to do.”

Jensen said the faculty team’s proposal offered Lehigh the chance to create a survey that suited its needs while also meeting the OCR requirements.

“We knew we wanted to do a survey that had a lot of weight and reflected the concerns of faculty and staff,” she said. “Provost Pat Farrell asked (former Vice Provost of Institutional Research) Gary Lutz and I to lead meetings with faculty and staff to determine where we could improve upon the instrument that was used the last time we conducted a climate survey.”

After looking into what other universities had done, Jensen said there was growing consensus that the best approach was for Lehigh to create its own survey instrument.

“There can be drawbacks to doing it this way, since you don’t have other universities’ data to compare yours with,” she explained. “But we felt that doing it on our own would be optimal for buy-in from across campus.”

Salvemini said OCR was very receptive to the idea that Lehigh would create its own survey that went well beyond their narrower requirements. “OCR recognized the benefits of doing it this way,” she said. “We had our faculty participate in a conference call with them so they were all on the same page.”

In addition to Packer and Burke, other faculty members who worked on the survey included Psychology Department Chair Gordon Moskowitz and College of Education Associate Professor Christopher Liang. With research interests that include unconscious stereotyping, group processes, the impact of racism on mental health and social support, the team had wide expertise to draw upon.

The team began by revisiting a 2007 Lehigh climate survey to find questions that would be worthwhile to ask again in order to see if there had been any change in the responses. Next, they built questions that could provide key indicators of problems on campus and identify positive trends. They also included certain validated questions and measures that come from their various fields of research.

“We study the process of stereotyping, of group dynamics and relations,” Burke said. “So by understanding some of those mechanisms, we could potentially point to some interventions that the university might consider.”

Jensen and colleagues in the Office of Institutional Research—including Lutz and the office’s current director, Yenny Anderson—worked in parallel with the faculty, ensuring that the survey would provide the highest level of confidentiality possible. The survey was put before Lehigh’s Institutional Review Board, a requirement for all research involving human subjects.

The team piloted the survey with 200 participants last spring to ensure that it could be completed in a reasonable amount of time and that the questions provided enough precision to allow for interpretation of the data.

Implications for Lehigh and beyond

All of the team members agree that getting strong participation from all corners of the campus is essential. Campus climate is multi-faceted, and hearing from everyone provides the best chance to get a complete picture, they said.

The experience of creating the survey has been a remarkable one for Burke. “As faculty, we can sometimes exist in our bubble, and it can be rare that we interact with staff and students on projects like this,” he said. “It’s really heartening to see how many people there are on campus who are dedicated to making this campus a more welcoming and inclusive place for everyone.”

Packer believes that understanding whether discrimination and prejudice are perceived to be part of a group’s norms is key to finding ways to address these issues. This is true not only at Lehigh, but elsewhere. “For me, there are pieces that will address real psychological questions about how bias works,” he said. “By studying these we will gain insight into improving intergroup relations here, but also potentially beyond our campus.”

Salvemini says it’s essential to hear from all corners of the Lehigh community, particularly at the pivotal moment in the institution’s 150-year history. “Let’s see where we are as a university and where we want to go. If we don’t hear from certain voices, we’ll miss that opportunity to make things better.”

What is The Lehigh Survey all about?
The Lehigh Survey was designed to learn about the experiences, opinions and beliefs shared by students, faculty and staff. The survey is an outgrowth of the Voluntary Resolution Agreement with the U.S. Department of Education’s Office for Civil Rights (OCR), and it represents the first campus‐wide climate survey in nearly a decade. It was created with the expertise of Lehigh faculty and goes far beyond the OCR requirements.

How can I access the survey?
Participants will only be able to access the survey via the unique link that has been assigned to them.  The Office of Institutional Research (OIR) will send the initial email to all faculty, staff, and students on October 12, 2015 and the subject of the email will be “The Lehigh Survey.”

What happens if I deleted the email or do not see the email in my Inbox?
If you accidently deleted the email, no need to worry. Additional emails in the form of a reminder will be sent to all those who have not completed the survey on Sundays, October 18, 25, November 1, and November 8, 2015. If you do not see the email in your INBOX, then please check the SPAM folder in your email account. The emails related to the survey will have the title The Lehigh Survey or A reminder to complete “The Lehigh Survey” and will come from the following email account: inoirsur@lehigh.edu.

Why am I limited to accessing the survey via this unique link?
Each person is assigned a unique link in order to ensure that each individual submits only one response to the survey. In addition, the unique link allows OIR to send the appropriate survey to each person. There are three versions of the survey: a faculty version, a staff version, and a student version. The unique links also allow OIR to monitor who has not completed the survey, so that reminders can be sent only to non‐completers. Your responses are confidential therefore the unique link will be detached from your responses prior to analyzing the data.

How long does it take to complete the survey?
On average, the survey will take about 20 minutes to complete. However, a person can access the survey multiple times until it is completed and submitted. If you wish to complete small sections at a time you may do so until the survey closes on November 10, 2015.

Will my responses be confidential?
Your responses are completely confidential. The responses to this survey will not be examined or reported for individual respondents.

Is there any response that would prompt the university to pursue my individual identity?
Although a disclosure of an incident of harassment, discrimination, or sexual misconduct would typically trigger the University’s obligations under applicable laws and University policies to follow up with the individual disclosing the information and initiate a University response, this will not be the case with responses to the climate survey. Any disclosure of harassment, discrimination, or sexual misconduct submitted in the climate survey will not trigger the University to conduct its own investigation unless the individual also initiates a complaint directly with the Equal Opportunity Compliance Coordinator.

If I would like to initiate a complaint about harassment, discrimination, or sexual misconduct, who should I contact?
You should contact the Equal Opportunity Compliance Coordinator, Karen Salvemini, at extension 8-3535 or at eocc@lehigh.edu.  You can also fill out the appropriate online reporting form at eocc.lehigh.edu.

Who do I contact if I have additional questions about the survey?
If you have technical questions or questions regarding the use of your responses, please contact the Office of Institutional Research via email at inoirsur@lehigh.edu or by phone at 610-758‐5890.