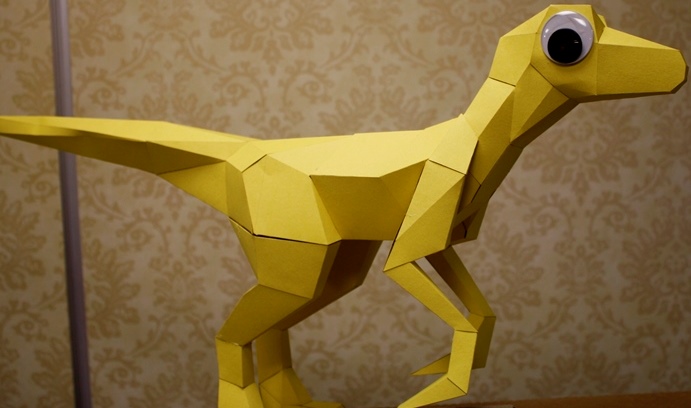 Lisa Glover ’13, a graduate student in Lehigh’s Technical Entrepreneurship program, won first place in the graduate category of the Thalheimer Student Entrepreneurs Competition for using a laser cutter to create a prototype of KitRex—3-D paper velociraptor that kids of all ages can build themselves.

Visitors crowding into “Innovation Alley” at Hotel Bethlehem last week were drawn to an impressive exhibit of new products and companies created by Lehigh students.
There were wooden toys that snapped together, softly draped clothing colored with flower dyes, a pair of sunglasses formed layer-by-layer on a 3-D printer and a set of devices used for Bitcoin commerce.
Innovation Alley was a new feature at the ninth annual Innovate! Celebrate! awards dinner, which celebrated Lehigh student entrepreneurs and was hosted by Lehigh’s Baker Institute for Entrepreneurship, Creativity and Innovation.
Twenty-eight students were honored for their accomplishments, as were a longtime Lehigh faculty member and a Baker Institute Advisory Council member whose efforts brought the institute’s LehighNYStartup immersion program to life.
Winning student ventures included an online stats toolkit for fantasy football fans, toys for children with Attention Deficit Hyperactivity Disorder and an educational aquaponics system. Awards went to winners of the Baker Institute’s EUREKA! Ventures Competition Series and “i” Prize for most innovative and imaginative idea.
Students shared personal stories of the impact Lehigh’s entrepreneurship programs have had on them. Katie Kiewel ’15 said she learned to solve problems creatively and gained a Silicon Valley internship. Roger Graham ’15 learned he could stay in school while launching his company, and Scott Grossnickle ’15 learned to value failure as part of the entrepreneurial process.
A fast start for athletic clothes company
“The culture of innovation we’re celebrating tonight wouldn’t be possible without everyone in this room,” said Lisa Getzler-Linn, Baker Institute senior director of programs and operations, recognizing the 130 faculty, alumni, students, staff, senior leaders, donors, mentors, council members and other guests.
John M. Thalheimer, donor of the Joan F. and John M. Thalheimer ’55 Entrepreneurship Ventures Endowed Program, presented the Thalheimer Grand Prize to Pierson Krass ’14, CEO of Krass and Co., which specializes in “preppy” athletic apparel. Founded in 2010 while Krass was a Lehigh student, the company now has nearly 50 wholesale accounts in addition to web sales.
“In my day, we thought an entrepreneur was born, not made,” Thalheimer said, but his involvement with Lehigh entrepreneurship programs has caused him to think differently. Today’s young entrepreneurs, he said, give him confidence that the nation is on the right track.
•    View photos from the event
Baker Institute Executive Director Todd Watkins introduced Lehigh President Alice P. Gast as a “rock-solid supporter” of the institute. “We are where we are in large part because she has been so engaged in helping to support us in what we’ve been doing,” he said.
The Baker Institute was founded in 2010 through a generous gift from the Dorothy H. and Dexter F. Baker Foundation and the vision of Dexter F. Baker ’50 ’57G ’81H, who worked with Watkins and Gast to bring the institute to fruition.
Expanding the entrepreneurial pipeline
Gast presented an inaugural faculty achievement award to John Ochs, professor of mechanical engineering and mechanics, who started Lehigh’s Computer-Aided Design Labs, the Integrated Product Development (IPD) program and the Technical Entrepreneurship master’s degree (TE) program. Ochs and the programs have received national accolades for innovative curriculum, real-world applications and contributions to economic development.
TE will graduate its second cohort of students in May. IPD has more than 200 students from two dozen majors participating on teams with 18 industrial partners. Among its notable graduates are Patrick Clasen’04 ’07G and Tim Marks ’04 ’06G, whose company, EcoTech Marine, began as an IPD project and was named one of the nation’s fastest-growing businesses by Inc. magazine.
“John Ochs has for 20 years been the driving force behind the growth of the entrepreneurial pipeline on campus,” Gast said. “We would like to very publicly with this award express our deep appreciation for John’s amazing track record and commitment to this institution and, more broadly, for his national leadership in STEM-related entrepreneurial education. John’s drive and inspiration have brought about a cultural change that has embedded the identity of innovation and entrepreneurship into Lehigh’s DNA.”
The award will be known as the “John B. Ochs Award in Recognition of Curriculum and Program Innovation, Building the Entrepreneurial Ecosystem at Lehigh.”
Ochs said the success of Lehigh’s entrepreneurship programs rested on student-directed learning and on the development of an infrastructure that supports student startup successes.
“It is my hope that the opportunities of the newly acquired Mountaintop buildings become the next Lehigh spaces for innovation,” Ochs said. “Our collective goal should be to create best-in-class nationally and internationally recognized innovation spaces where dedicated faculty work within dedicated curricula in dedicated spaces to attract students from around the world to come to Lehigh to learn by doing, to learn by making and to learn by launching.”
Dale F. Falcinelli ’70 ‘72G, Baker Institute Advisory Council chairman and director of the institute’s LehighSiliconValley immersion program, presented the Farrington Award for Outstanding Commitment to Entrepreneurship at Lehigh to Geoff Schneider ’88. Schneider is the founder of Cava Capital, a venture capital firm that invests in and nurtures young companies. He took part in LehighSiliconValley and was instrumental in extending the entrepreneurship immersion program to New York City’s startup hubs in 2012 and 2013.
Schneider urged students to think deeply about the impact of the Baker Institute’s three prongs—entrepreneurship, creativity and innovation—on their studies, goals, self-perception, sphere of influence and choices.
“Strive to change the world,” he said. “No matter what you study, what your passion is and whether or not you start a business, work for a big company, teach, work in public life, private industry, whatever the case, take these three words with you at all times.” 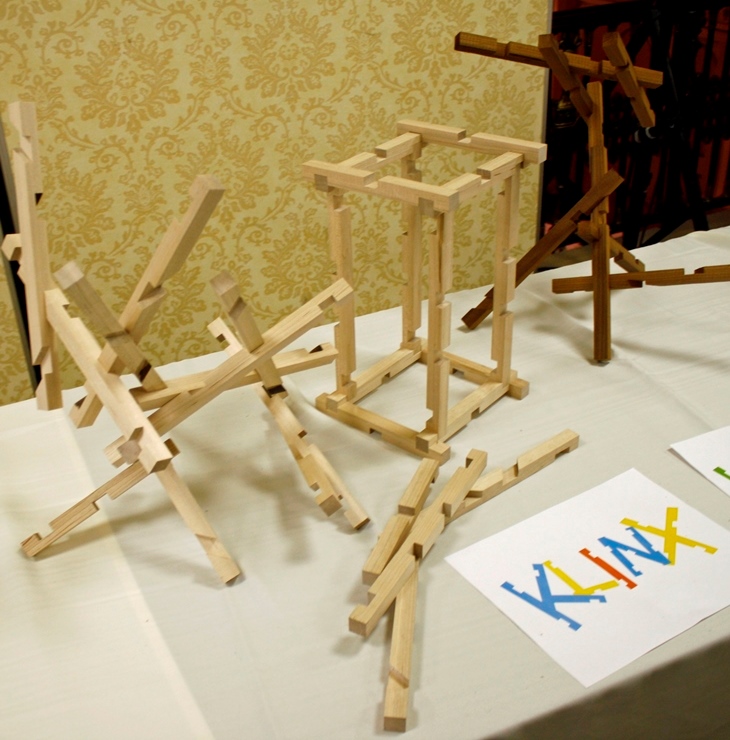 Klinx, a line of toys intended to help children with ADHD build cognitive skills, was conceived and developed by Shannon Varcoe ’15, who won first place in the Eureka Series’ Social Impact Venture Competition. Varcoe is an IDEAS (Integrated Degree in Engineering, Arts and Science) major at Lehigh.