Lehigh on Thursday morning celebrated the formal groundbreaking for SouthSide Commons, an apartment-style residence hall for 400-plus students that is a key component of the University’s expansion plans.

“This is an exciting day for Lehigh,” President John D. Simon told the more than 70 people who gathered at the building site under a white tent. “Our university has made a major commitment to the future, and today’s groundbreaking marks the first step in its implementation.”

Slated to open for the 2019-2020 academic year, the five-story structure will rise at Brodhead and Packer avenues, on the site of a former university parking lot.

“Let’s face it,” Simon said, “parking lots make lousy borders. Neighbors shouldn’t be separated by large stretches of asphalt, and universities should not be separated from the community in which they reside by a large stretch of asphalt. SouthSide Commons will help change all that.”

He said the new residence hall, on the northwest boundary of campus, will create new possibilities for how students interact with the surrounding community.

“The partnership between the city and Lehigh University is strong and is instrumental to the future prosperity of South Bethlehem,” noted Bethlehem Mayor Robert Donchez. “This facility will bring more foot traffic and attention to South Bethlehem’s businesses as the revitalization of the South Side continues to move forward.”

The groundbreaking marked a significant step in Lehigh’s broader plans to expand its academic footprint and strengthen its research activities. As part of its “Path to Prominence” initiative, Lehigh will add 1,000 more undergraduates, 500 more graduate students and 100 new faculty. The plan also calls for construction of a Health, Science and Technology Building, which will house Lehigh’s new College of Health and offer 180,000 square feet of critically important space for teaching, research and collaboration.

“It is certainly great to be a part of this milestone day,”  said Kevin L. Clayton, ’84, ‘13P, chair of Lehigh’s Board of Trustees. “And I speak on behalf of my fellow board members and echo their excitement as we take the next step toward raising Lehigh University to even greater heights.”

Lehigh is building SouthSide Commons in partnership with Memphis-based EdR Collegiate Housing, a leader in the college housing industry.  The building will have studios and two-, three- and four-bedroom apartments, and it will include a fitness center, study rooms and an outdoor recreation area.

EdR president Tom Trubiana, who commended Simon and the university Board of Trustees for their leadership during the expansion, said such projects tend to be good for the community.

“When a university grows,” Trubiana said, “the local neighborhood and the city in which it resides also feel a positive impact.”

Clayton said the groundbreaking marked the beginning of what he hopes will be the first many events he’ll be attending in the next few years as Lehigh continues along its Path to Prominence.

“Simply put, these are exciting times for Lehigh,” he said. “Lehigh is hot. I couldn’t be more optimistic about its future.” 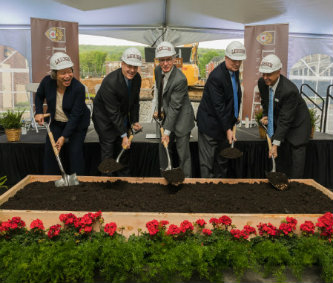 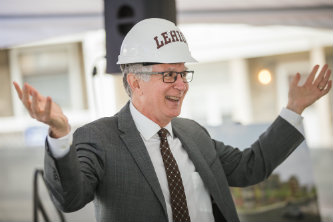