It’s easy to understand why.

His larger-than-life paternal grandfather, James B. Donovan, was the lawyer portrayed by Tom Hanks in the Cold War thriller. He said he grew up hearing stories about his namesake, who negotiated the 1962 spy swap depicted in the film, and later, the return of more than 1,100 prisoners held by Cuba after the failed Bay of Pigs invasion.

“The creation of Bridge of Spies has been one of the most mind-blowing events of my life—to finally have my grandfather’s story told right, and for hundreds of thousands of people to see it around the world, is literally a dream come true,” wrote the younger Donovan, an executive business coach, in an article he posted online.

Donovan, who received his bachelor’s in English from Lehigh, said in a phone interview from San Francisco that his grandfather had died before he was born, but that he and other family members felt an obligation to keep his memory alive, given his grandfather’s place in history. Until the movie, he said, he found that difficult to do, since his generation didn’t understand the Cold War.

The elder Donovan, who died in 1970 at age 53, had been an associate prosecutor of the International Military Tribunal at Nuremberg at the end of World War II, where he presented photographic evidence of war crimes committed by Nazi officers.

After returning to private practice, he was tapped to defend Soviet mole Rudolf Abel after others declined, saving him from getting the death penalty by arguing that Abel could be used in a prisoner swap if any American was captured by the Soviets.  That foresight came in handy when American U-2 pilot Francis Gary Powers was shot down by the Soviets in May 1960 and jailed nearly two years for espionage. Donovan negotiated a swap with Abel that also brought the release of Frederic Pryor, a Yale student. Lauded for his negotiating skills, he later secured the release of the Bay of Pig prisoners.

He wrote two memoirs, including Strangers on a Bridge, on which the movie is based.

The younger Donovan said his father got to meet Abel in his jail cell and tagged along with the elder Donovan on a trip to Cuba, where he met Castro and took a photo.

Watching the film, the younger Donovan said he was filled with emotion, as he found himself missing the grandfather he never got to meet and know. “I just imagined what it would have been like if he had been around” as he grew up, he said.

“Seeing Spielberg’s version of my grandfather’s story helped me connect the dots between the story portrayed in Bridge of Spies, the stories I heard growing up, and the Bay of Pigs story,” he wrote, “and thus made it easier for me to see the strength and integrity of my grandfather’s values.” 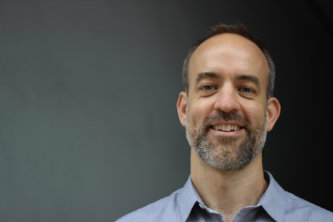 Jim Donovan ’96 grew up hearing stories of his grandfather, who is portrayed by Tom Hanks in the film "Bridge of Spies." Photo: Contributed 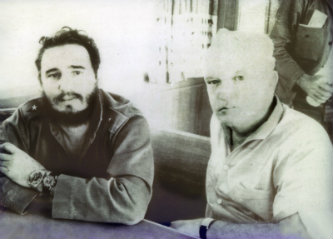