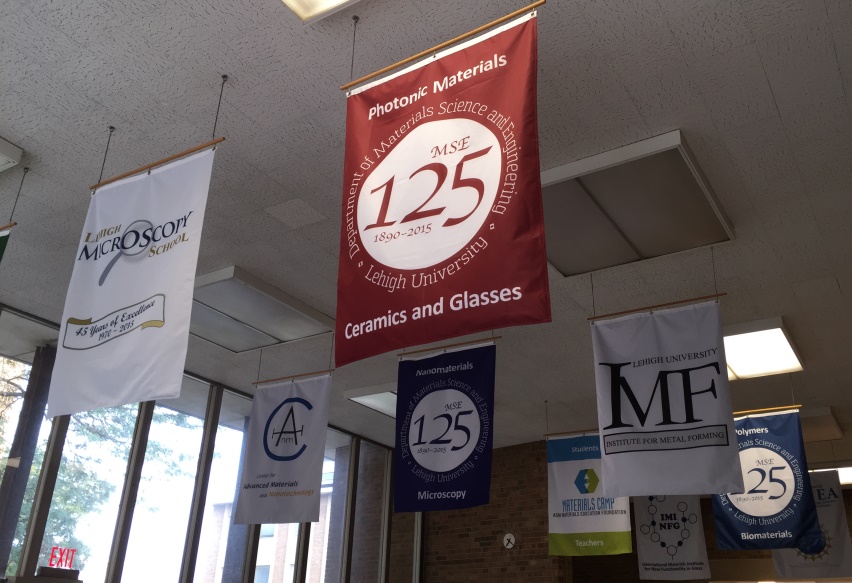 Banners inside Whitaker lab attest to the scope of materials science and showcase the research centers and other endeavors at Lehigh that are related to materials science. (Photo by Mary Anne Lynch)

History and national security, career advice and gratitude, and discussion of revolution—in material and product design—are on the menu today and tomorrow (Oct. 1-2) when the department of materials science and engineering celebrates the 125th anniversary of its founding.

The event begins with a 5 p.m. reception today in Iacocca Hall followed by dinner in the Wood Dining Room. The featured speaker, former astronaut Terry J. Hart ’68, will give a talk titled “Enabling the Moon.” Hart is now a professor of practice in Lehigh’s department of mechanical engineering and mechanics.

The celebration resumes at 9 a.m. tomorrow (Friday, Oct. 2) in Baker Hall of the Zoellner Arts Center with a welcoming address by Helen M. Chan, the current chair of the materials science and engineering department.

Michael R. Notis ’60 ’63 M.S. ’69 Ph.D., professor emeritus of materials science and engineering, will then explore the department’s history in a presentation titled “Facts: Firsts and Fun.” Seven recent alumni of the department will follow with a panel discussion on career advice.

In his presentation, Notis will list highlights from the department’s history, including the following:

•    Mining and metallurgy made up one of the five original academic programs of study when Lehigh was founded in 1865.
•    Lehigh began awarding the B.S. in metallurgy in 1890-91, when mining and metallurgy were separated into two departments. In 1898, the department of metallurgy was established.
•    When Lehigh reinstituted its Ph.D. program in 1938, two international students—Shang-Shoa Young (Yang Shang-Shoa) from Beijing, China, and Vittorio De Nora from Milan, Italy—joined two chemistry students to become the first students to receive the degree.
•    The department’s name was changed to metallurgy and materials science in 1965 and to materials science and engineering in 1986.
•    The Materials Research Center was established in 1965; its name was changed in 2003 to the Center for Advanced Materials and Nanotechnology.
•    The department houses one of the most extensive collections of electron microscopes in the U.S. In 1970, the department began offering its annual Microscopy School, which has trained nearly 6,000 engineers, scientists and technicians from around the world.
•    Several other leading research centers are housed in the department. They include the Institute for Metal Forming, the International Materials Institute for New Functionality in Glass, and the Materials Pennsylvania Coalition (MatPAC).

Also on Friday, the department will present its Distinguished Alumni Award to four former students:

•    Hamid R. Azimi ’91 M.S. ’94 Ph.D. is vice president for the Technology and Manufacturing Group and director of Substrate Packaging Technology Development with Intel Corp.
•    Terrence S. Hahn ’87 ’92 M.Eng. is president and CEO of Honeywell Transportation Systems.
•    Joan D. Stanescu ’87 ’92 M.S. is a former technology manager with Lucent/Agere/Triquint and also with IBM. Stanescu, who is married to Hahn, is also a violist with the La Châtaigneraie Orchestra in Geneva, Switzerland.
•    Richard W. Hertzberg ’65 Ph.D. is professor emeritus and former chair of the department.

Following a social networking lunch in the Butz Lobby of the arts center, three alumni will give speeches:

•    Alton D. Romig Jr. ’75 ’77 M.S. ’79 Ph.D., the executive director of the National Academy of Engineering, will give an address titled “The National Academies and the Nation’s Security.” Romig is the former vice president and general manager of Lockheed Martin Aeronautics Co. Advanced Development Programs.
•    Alexander Bandar ’02 M.S. ’05 Ph.D., the founder and CEO of the Columbus Idea Foundry, will discuss “The Democratization of Design—How the Maker Movement Is Igniting a Materials Innovation Revolution.” The foundry is a community workshop, or “makerspace,” that houses tools from blacksmithing to 3D printing and teaches classes on design and fabrication.
•    Clare M. Rimnac ’80 M.S. ’83 Ph.D., the Wilbert J. Austin Professor of Engineering and the associate dean of research at the Case School of Engineering (CSE) at Case Western Reserve University, will talk on “Giving Thanks—Paying It Forward.”

The celebration will conclude at 3 p.m. with the dedication of the Arlan O. Benscoter Metallographic Preparation Laboratory. Benscoter, a retired research engineer, supervised the department’s optical microscopy labs for many years while teaching undergraduate lab courses and helping students on projects. He was elected a Fellow of ASM International, the premier professional society for materials engineers and scientists, which also awarded him its International Distinguished Educator Award. 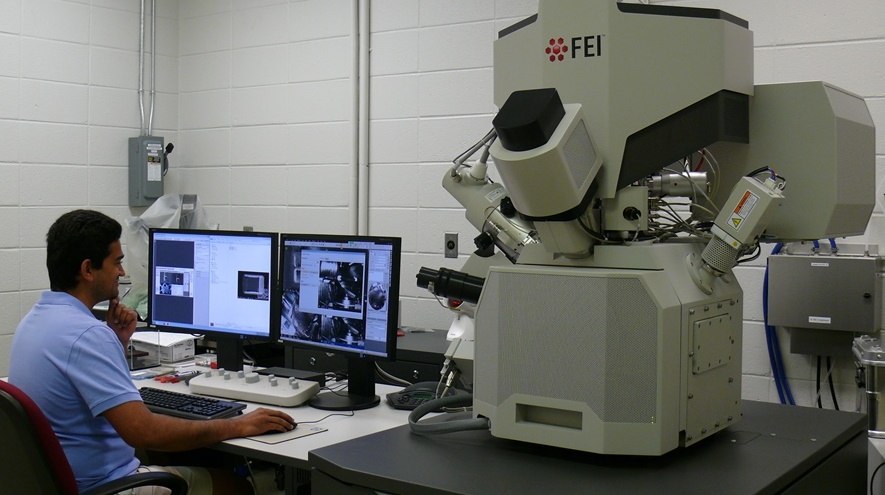 Binay Patel, a Ph.D. candidate, examines a sample in the materials science and engineering department’s Electron Microscopy Facility, which houses one of the nation’s largest collections of electron microscopes. 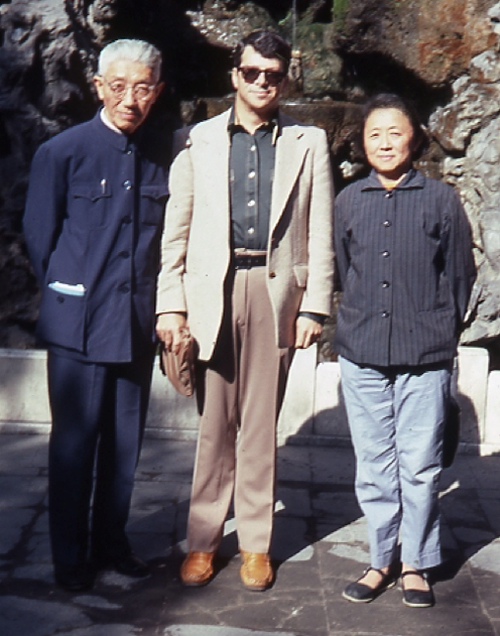 On a visit to China in the 1970s, Mike Notis (center) was hosted by Yang Shang-Shoa (left), who received his Ph.D. in metallurgy from Lehigh in 1938. Han Rubin is standing at the right in the photo.