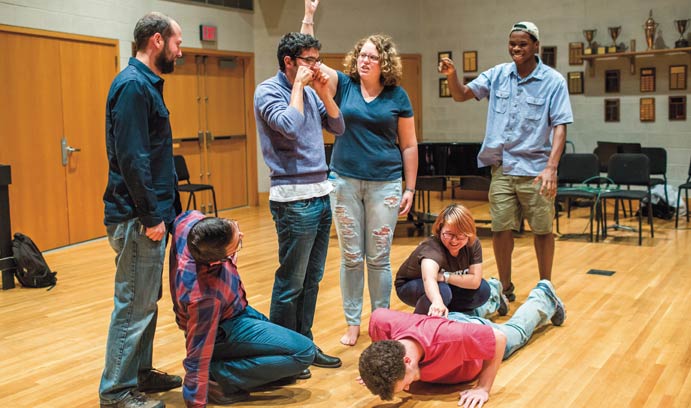 A central concept in improvisational comedy, a highly collaborative form of theater, is “yes, and.” When one performer makes a statement, the other responds with “yes, and...,” agreeing with the stated idea and building on it. So, for example, if one performer says she’s holding a bowling ball, the other might respond with, “Yes, and I love its mustache.”
Thus begins the snowball of humor that is improv—unscripted theater created in real time.
The Hobo Army, Lehigh’s improv comedy troupe, practices “yes, and” on a weekly basis, producing laughs and the more enduring benefit of some essential life skills.
The Army has existed on and off since 2006 but didn’t become an official club at Lehigh until 2014. The club meets for open rehearsals on Thursday evenings from 9 to 11 in the Zoellner Arts Center. All members of the Lehigh community are welcome.
“You don’t even need to get up and perform. You can watch and laugh... We know improv can be uncomfortable the first few times you do it, and we like having a welcoming environment for that to happen in organically,” says Amber Schrum ’16.
The size of the group fluctuates but often includes a blend of undergraduates, graduate students and alumni. The club also gathers on occasional Sundays for more intensive, technique-based performance rehearsals or workshops, a few of which are required before a member can perform publicly. The Hobo Army performs at Lehigh as well as at local venue Godfrey Daniels. The group has also participated in the SteelStacks Improv Comedy Festival for the past two years.
“It’s a great escape,” says Adam Weiner ‘16. “But I also get a lot of satisfaction out of just making people laugh... I can’t always do that. So the fact that I can do that on stage is really great.”
No experience required
Though some members of the Hobo Army had theater or improv experience in high school, no prior experience is necessary for participation.
“I have zero acting background,” says Weiner. “I was in a position where I wanted to try some new things. I tried it out and I really liked it.”
Students come from a wide variety of backgrounds and fields of study. The club’s executive board alone includes students majoring in German and English, mechanical engineering, molecular biology, IDEAS and biopharmaceutical engineering.
“One of the great things about improv is that it really allows you to meet people in completely different majors,” says Talia Dunyak ‘16. “It really helps bridge that gap between the differences you might have.”
Improv also allows students to take a break from the rigor of a daily schedule and just play for a couple of hours a week.
“My days are fairly structured from the time I wake up to the time I go to bed,” says John Hosmer ‘16. “[Improv is] a time where I don’t have to care about anything else. It takes me out of the real world and puts me into this really fun, imaginary place.”
Beyond laughs
Students have seen the impact of improv in their relationships, job interviews, and academic performance. Improv, they say, makes them more attentive listeners and better able to relate to others.
“The whole basis of improv is relationships between people that aren’t necessarily the most standard or that you’d see every day,” says Hosmer. “When you come [to practice], that means you’re going to invest your time into collaboratively creating something with somebody else.”
“Improv is such a relational thing,” says Schrum. “I connect better with people on the spot... You just form more organic connections with people because of [improv], because you’re really interested in them.”
Weiner says that he no longer experiences presentation anxiety because he now has the ability to ad-lib and think on his feet.
“Improv helps you to think in very new and creative ways that are totally different than what might be taught in a classroom,” says Dunyak.
Several students say improv has helped their self-confidence.
“I just never know what to say, but being in improv you learn how to just say what is on your mind. You still need to have a filter,” says Hosmer with a laugh, “but it helps you refrain from just being silent and shutting down every little thought that comes into your head.”
“I had a stock of written and memorized poems that I’d been keeping and performing inside my head since high school. I’d never let them out to anyone,” says Matt Gordon ‘16. At a recent poetry reading, Gordon decided to let them out. “The stage is one of the few places in my life where I’m not as socially anxious and that’s really cool.”
Schrum, who shared her own poetry at the same event, agrees.
“I never would have read my poetry before this year... but everyone came out to support me. I never would have just let go like that before improv and before the community we’ve formed here.”
Even “yes, and” carries over into life.
“When you’re in a scene, if someone says you’re holding something and in your mind it’s a rock but they say, ‘That’s such a large elephant you’re holding,’ you say ‘Yes, and...’ [You] continue on and just build and not contradict. In life it’s just easier to say, ‘Yes, and.’ [It’s more] positive,” says Dunyak.
“It’s a welcoming environment,” says Schrum. “That’s why I keep coming back. These people genuinely care about you.”
Laughter, it turns out, is an added bonus.