When we began work on this issue of the Bulletin, we knew we had a real challenge on our hands. After all, Lehigh President Alice P. Gast, whose tremendous legacy we examine in the pages that follow, has been a hugely successful and transformative leader during her time on South Mountain. It is safe to say, in other words, that has she built quite a legacy here.

But now, eight years after she was named our 13th president, she is leaving Lehigh to take over as President of Imperial College London.

In the pages that follow, we will take a comprehensive look back at President Gast’s tenure at Lehigh—one that began with her issuing a challenge to the Lehigh community to set its sights high and pursue a better, stronger Lehigh than they ever thought possible. Suffice it to say, the university responded—and is better for it.

Other highlights from this issue include:

As always, I invite you to share your thoughts and comments. You can send your letter to the address at right, or email me at tih313@lehigh.edu.

Thank you for your continued support. And thank you again for reading the Bulletin. 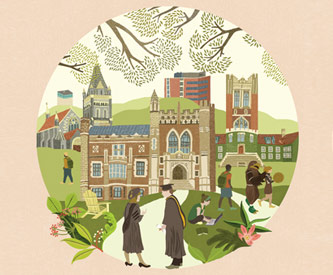 President Alice P. Gast has been a transformative leader during her time on South Mountain. Illustration by: Dawn Cooper