A full-fledged racer on the slopes 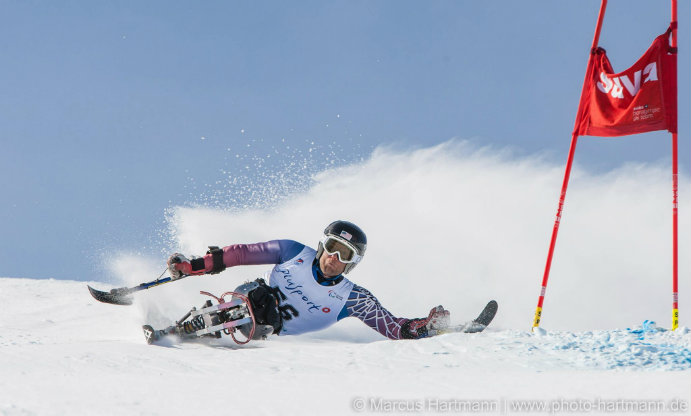 When you watch Tyler Walker race down a mountain, you can’t help but notice his form. Walker, a member of the U.S. Adaptive Ski Team and the 2014 U.S. Paralympic Alpine Skiing Team, is able to tilt his ski at an extreme angle as he maneuvers around gates.

“Tyler’s ski and the frame bank up to about an 80-degree angle, but his torso is still almost vertical,” says Joachim Grenestedt, professor of mechanical engineering and director of Lehigh's Composites Lab.

Grenestedt’s desire to make things better and faster has led him to put his stamp on land speed racers, boats and aircraft. He turned his attention to monoskis when a former student was injured in an accident and lost the use of his legs. An avid skier himself, Grenestedt encouraged the student to try adaptive skiing.

“I’d seen a lot of these adaptive skiing programs and it is truly amazing what some people can do. Skiing is a high-adrenaline outdoor sport with lots of action and I love it,” says Grenestedt.

While observing his former student on a monoski for the first time, Grenestedt noticed that a large number of monoskis at the lodge were broken.

“I believed we could design and manufacture a better sled,” says Grenestedt. The speed-loving engineer saw a challenge. He worked with Lehigh mechanical technician Bill Maroun to build a better monoski. The first one went to the student, who used it for several years. Grenestedt and Maroun’s ski caught the attention of other skiers because it never broke.

“Why don’t we build a few more?” Grenestedt remembers asking.

In 2011, Grenestedt and his wife, Channy Tokura, received a Technology Transfer Grant from the Keystone Innovation Zone (KIZ) and started DynAccess, an adaptive ski equipment company whose slogan is “Nature has no sidelines.” Tokura runs the business, while Grenestedt serves as the self-proclaimed “grease monkey.” Word traveled fast in the small and close-knit community of adaptive skiing.

Grenestedt and Tokura got to know skier Chris Devlin-Young, a four-time Paralympic Games medalist and World Cup champion who was paralyzed in a plane crash during his service in the Coast Guard. Devlin-Young—who at age 53 is the oldest athlete to win an X Games winter medal—was interested in the DynAccess monoski and called Grenestedt after a part of his ski at the time broke during a run. Grenestedt invited him to Bethlehem for a few days and Devlin-Young decided to switch to the DynAccess ski.

“He got on our rig and did reasonably well already the first year,” says Grenestedt. “The second year was better, and before the 2014 Paralympic Games in Sochi he became ranked number one in the world in downhill.”

“After the Sochi Paralympics, the monoski I was using wasn’t really ideal. I made it work, but after that crash I was kind of over it and I was definitely ready to switch to something else,” says Walker. Grenestedt’s persistence paid off, and Walker was soon using a DynAccess Tensor monoski.

“[Grenestedt] developed a new model with some improvements that worked a lot better for someone like me,” says Walker, who was born with lumbar sacral agenesis and had both legs amputated at the knee as a child. “It was low to the ground. I could use different shocks with it, and that made it a lot more comfortable for me to use. [He] built it so that it would be far stronger than anything that anyone has ever used and also make a good turn.”

“Joachim’s support is unreal,” says Walker. “You should see how many emails and calls we’ve had to figure out how to make this thing work. I send him an email and within a day he gets back to me. It’s great because it keeps me thinking about what I’m doing and where I could go next with it.”

When asked what makes his monoski better, Grenestedt has a simple reply: “Why is a sports car better than a minivan?”

This connection is particularly appropriate, as Grenestedt sees monoskis as vehicles: “These are racecars and I’m making these racecars go faster and with better precision.”

“The frame moves in a very predictable way,” says Walker. “It’s very light. It’s very strong. A lot of thought went into the frame, and the shock absorber really makes everything work. I’ve been using his monoski since last summer, and every time I use it I find something new. It gets better and better and I’m starting to realize how much it’s going to let me improve.”

Watching Walker and Devlin-Young ski is “unbelievable,” says Grenestedt. "Athletes such as Tyler and CDY [Devlin-Young] may have some physical disabilities. But when they get out on the snow, they get into their monoskis, and from then on, I’m the one with a disability. I try my best to keep up with them and I have no chance.”

And with Grenestedt’s monoski, Walker believes he can go even further.

“With every other monoski, I’ve reached the limit that I could go. The technology wouldn’t let me go any further,” says Walker. “With this I feel like I’ve barely scratched the surface of what it will allow me to do.” 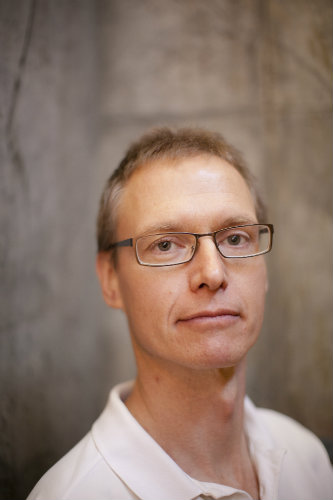 Grenestedt works closely with athletes to adjust their equipment for optimal performance. (Photo by Christa Neu)