From Packer Avenue to Penny Lane 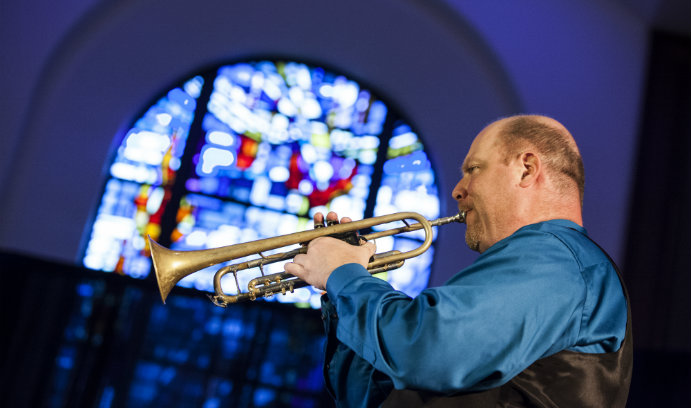 Bob Wagner ’91 and his piccolo trumpet are on a magical mystery odyssey.

Bob Wagner ’91 played the most unusual audition of his life on Nov. 28, 2012. He posted a YouTube video of himself performing the piccolo trumpet solo for “Penny Lane,” the Beatles’ sweet stroll down memory lane. Nailing the tricky, time-tripping fanfare, he hoped, would get him a regular job with a Fab Four tribute band.

Not two months later, Wagner was hired to play a weekend with Beatlemania Now, a group founded by an alumnus of Beatlemania, the Broadway hit that spawned a legion of mop-topped copycats. Wagner soloed in “Penny Lane” and performed his brass arrangement for “All You Need Is Love” with three horn players, including his wife, Gail Glass-Wagner, a trombonist.

Debuting in a fabled concert venue justified a gut-wrenching decision Wagner made in 2010, when he traded a career as a technology/software sales engineer for a full-time gig as freelance musician.

Wagner grew up in Plymouth Meeting, Pa., the child of a state unemployment employee and a high school football-coaching bed-and-breakfast owner. He arrived at Lehigh wearing a mouth retainer, a major improvement on the braces that had handicapped his trumpet playing in high school. Sprung from dental prison, he minored in music and majored in electrical engineering, took three courses in synthesizers, chaired the trumpet sections in the jazz and wind ensembles, and played with the Marching 97.

Wagner came to Bethlehem as a musical caterpillar and left as a butterfly. He credits three teachers. Lawrence Wright, the Lehigh Valley’s best-known classical trumpeter, taught him “not only how to play notes, but how to make music.” Ensemble director Casey Teske, now at Clarion University, taught Wagner how to run a band. Paul Salerni, composer and professor, improved Wagner’s knowledge of contemporary music and jazz.

After graduating, Wagner worked as a pool-hall caretaker, security guard and wedding musician. He dreamed of soloing in “Penny Lane” while playing piccolo trumpet voluntaries. In 1995 he joined AT&T Microelectronics in Allentown as a sales engineer for computer chips. He helped customers understand their new equipment and company executives understand their customers. He instructed engineers around the world and added $75 million to the company coffers. He was, in short, a semiconductor conductor.

At 29, Wagner was transferred to Boston. At 31, he moved to Philadelphia to join a new sales/technology team and be closer to Gail, then a single mother, whom he had met in a big band.

Five years later, Wagner’s team was shut down, and he began a roller-coaster ride that he chronicles in two motivational essays at LinkedIn. He held a series of jobs and took trumpet lessons, which helped him finally hit a high G. He cared for his mother, who had Parkinson’s, and lost most of his savings investing in his father’s failing B&B.

In 2010, laid off for the third time in five years, Wagner decided to become a full-time freelance musician, figuring he could make a decent living doing what made him happiest.

Wagner insists his sales engineering has made him a more efficient, more empathetic band leader. Music and technology have improved his motivational writing. Inspired by Wagner’s LinkedIn essays, a high-school marching bandmate began playing trumpet again after decades of setbacks. “I like to think,” says Wagner, “that I helped him find a path to maybe a better place.”

Wagner admits that his path may include a new gig as a motivational speaker. He could discuss selling his “Penny Lane” soloing in an act named after his LinkedIn essay “Bring the Funk to Break Your Funk.”

For Scott Willoughby ’89, it's Mission: Possible

Scott Willoughby ’89 helped lead development of the most powerful and complex space telescope ever launched, the James Webb Space Telescope.