From Bethlehem to Broadway With The Great Comet

Gelsey Bell ’04 talks about Lehigh, The Great Comet and her path to Broadway.
Video: Stephanie Veto

Singer, songwriter and performer Gelsey Bell ’04 shined on the Broadway stage as Princess Mary in the immersive, energetic musical Natasha, Pierre and The Great Comet of 1812, during its 10-month run in New York’s Imperial Theatre. The musical, a slice of Leo Tolstoy’s War and Peace, received 12 Tony Award nominations and won two, for Best Scenic Design and Best Lighting Design in a Musical.

Bell had a choral scholarship to Lehigh. While on campus, she spent much of her time at the Zoellner Arts Center, where she was involved in numerous productions, and at the Humanities Center, where she discussed ideas and read books aloud with Philosophy Club members. The Bulletin caught up with Bell at The Russian Samovar restaurant in New York over the summer before The Great Comet ended its run on Broadway and before her month-long leave from the musical to travel to Kyoto to study Noh theatre.

Tell me about your Lehigh experience.
Lehigh was a really wonderful place for me because I got to just try out all my ideas. I majored in vocal performance and theatre directing, and minored in philosophy, and I had my hands in a lot of different parts of the arts scene of Lehigh. It was the classic liberal arts experience, where you’re spending a lot of time with people studying many different things and not feeling stuck to one genre or one type of thinking or doing. I was in productions as an actor, stage manager, director, composer and assistant set designer. I tried a lot of different parts of that world, which was great because I really got to see all sides of it, which has been helpful as I moved forward.

I grew up in a small town in Northern California, a very different kind of town than Bethlehem. It was part of why I wanted to go to Lehigh, to see another part of America and American culture. My mom is a pianist [and dad is a philosophy professor], and I grew up singing all the time. My classmates would call me “Melody Box” because I would not shut up (laughs). I grew up around a lot of creativity and a lot of the arts. So part of what I was looking for was, not a college that was going to teach me creativity, but a place where I could just thrive and learn a lot of other things.

As a student at Lehigh, did you have your sights set on Broadway?
No, not at all!  I didn’t even study acting! What I did have my sights set on was new works. I wanted to direct new works, I wanted to write new things, I wanted to be part of what develops the latest in culture. The show I’m in on Broadway is the show I’ve been with since the first workshop; it’s been five and a half years now. I’m good friends with the composer [Dave Malloy], and we’re both part of this community of artists that is making new work. And this is a show that has gone all the way to Broadway, which is so exciting for us.  But the basis has always been the creation of new work and nurturing that.

I am definitely unusual on Broadway because I did not try to get to here. … I don’t have an agent. I didn’t audition for the show. Those things are all very unusual for the theatre world.

What was your path to The Great Comet?
After Lehigh, I went to grad school, and I got my Ph.D. at New York University in performance studies. … While I was getting my Ph.D., because it was in New York City, there was this amazing artists’ community here, and as time went on, I joined this ensemble, I worked with this composer, and I just kept saying yes to opportunities that came my way. At first there was no money involved, and it didn’t matter, because I was in grad school, and then, as things continued, all of a sudden I kind of stopped getting my stipend from NYU, but I was making a living performing and writing music. So it kind of just worked out that way. And Dave, who wrote The Great Comet, is very much a part of that artists’ community. So both our careers have moved forward together but differently.

You are singer, songwriter, performer and collaborator. Where do you find your inspiration?
I don’t know if I even think of it as inspiration. For me, probably partly because I grew up around so much art, it has always been an essential part of living. It’s been an essential part of making sense of the world around me. … There’s something that happens when you’re either in a piece or you’re writing a song that is a process of understanding. It’s not just writing the words and then you’re done. You’ve gotten a message out. It’s almost like the process of writing those words is finding the message and making sense of what it is you want to do. 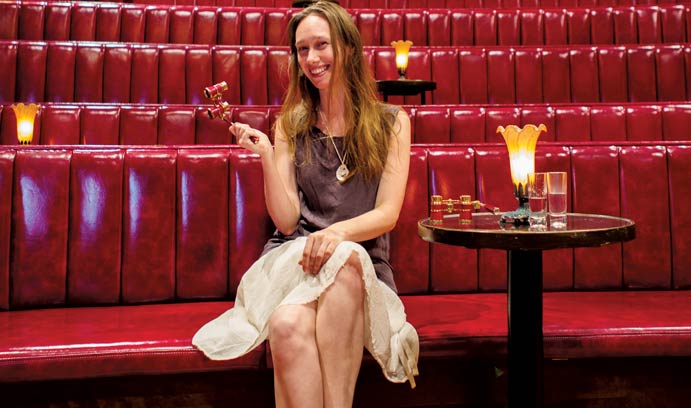 For Gelsey Bell ’04, art is an essential part of living. Photo: Christa Neu