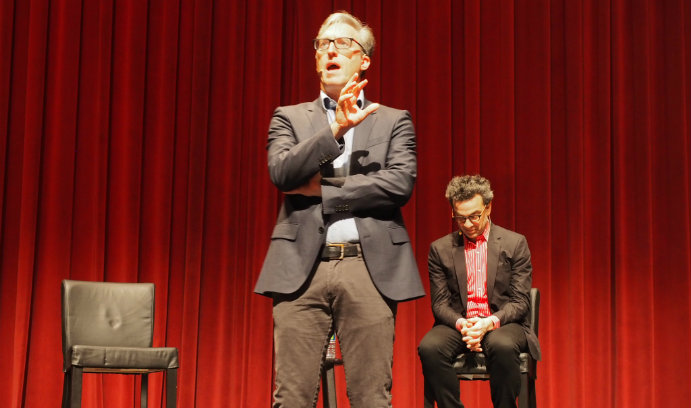 Steven Levitt, the economist and Freakonomics author, learned the hard way not to give financial advice to prostitutes.

It was just one of the lessons from the odd areas of research that have become Levitt’s trademark since Freakonomics hit The New York Times bestseller list in 2005. For the keynote address of the Lehigh University Alumni Weekend, Levitt and his co-author Stephen Dubner entertained a crowd of about 500 at Zoellner Arts Center with stories of studying the sex trade in Chicago, hand hygiene at a Los Angeles hospital, and why American turkeys are bred by artificial insemination.

While conducting research into the financial dealings of prostitutes and their clients in Chicago, Levitt interviewed a high-priced escort who said she charged $300 an hour. He later asked her to speak to one of the economics classes he taught at the University of Chicago and when she demurred, he said he would pay her hourly rate for the two-hour class.

“It’s sad to say but about a third of my students said it was the single best lecture they had received in their four years at University of Chicago,” Levitt said, drawing laughter.

One of his students asked the escort how much she charged and when she said “$400 an hour,” Levitt realized he would be $200 short in paying her.

“It’s not like I can go to the National Science Foundation and say, ‘Hey you know I need some grant money because I’m too lazy to teach my own classes so I hired a prostitute so I need $800,” he said.

Another student asked the escort how she settled on charging $400.

“She said, ‘Well you know, the very first time that I was with Professor Levitt, he convinced me that my services were far more valuable than the $300 I was charging’,” Levitt said.

During their Lehigh talk Saturday (May 21), Levitt and Dubner switched off like tag team lecturers, regaling alumni with story after story about their own lives and the interesting subjects they’ve investigated.

In introducing them, Jennifer Cunningham, Lehigh’s assistant vice president for alumni engagement, said they were chosen to give the keynote because their different ways of looking at subjects fit in well with the Lehigh ethic of attacking problems from unexplored angles and coming up with innovative solutions.

Dubner, who has written and edited for The New York Times and authored three books in addition to those with Levitt, said one of his interests is agriculture economics. For decades, the innovations in farming have repeatedly defied predictions that agriculture could never keep up with the burgeoning world population.

“Here we are seven billion people and our agriculture has been steadily increased and revamped and improved to the point where we easily produce enough food to feed seven billion people everyday,” Dubner said. “No one was predicting that was possible. That doesn’t mean there aren’t people who go hungry, there are, but that is almost always a failure of governments, with corruption or political dysfunction, not a failure of agriculture.”

Dubner said he was reading a journal about agriculture economics when he came on the statistic that 100 percent of the turkeys Americans eat come from birds that were bred through artificial insemination, compared to chickens that mostly breed naturally.

“Basically, turkeys don’t get to have sex with each other and chickens do,” he said. “First of all, that’s a justice issue, right?”

He researched the question and found out that Americans love turkey white meat and so turkey breeders started breeding turkeys with bigger breasts.

“Now, they’ve been bred both the male and female to have such large breasts that they literally cannot get close enough to have sex with each other,” he said. “Thus the need for a new industry, which is turkey artificial insemination.”

Dubner also talked about how Cedars-Sinai Medical Center in Los Angeles tried several ways to get all staff to increase their hand washing in an effort to reduce bacterial infections that cause preventable deaths. Each effort failed until the epidemiologist took a specialized photograph of a petri dish that showed the hand-shaped image of bacteria from a member of the hospital’s top brass and made it the screen-saver of every computer in the system.

“Virtually overnight it worked,” Dubner said. “Hand hygiene compliance at Cedars-Sinai shot up to about 100 percent.”

Levitt burst on the national scene 15 years ago in a blaze of controversy. He co-wrote a paper that suggested that the dramatic decrease in crime during the 1990s could, in part, be explained by the Supreme Court’s landmark Roe v. Wade decision which legalized abortion.

That 1973 ruling gave American women a legal path toward terminating an unwanted pregnancy, which Levitt argued meant that fewer children born after Roe v. Wade were unwanted and unwanted children were more likely to become criminals. His explanation of the theory – which earned him attacks from both the right and the left – is found in Freakonomics.

Levitt and Dubner followed up the success of that 2005 book with SuperFreakonomics, Think Like a Freak and When to Rob A Bank. Podcasts of the “Freakonomics Radio” show, garner 5 million downloads a month on iTunes.

Levitt traced his interest in offbeat economics back to his early difficulties with math. He recalled going back to his 15-year high school reunion and seeing his high school math teacher who at first struggled to remember him.

Levitt took one remedial math class while at Harvard University and then didn’t take another math class until he got accepted to a doctoral program in economics at the Massachusetts Institute of Technology and realized he was way “out of my league.”

“The only thing that saved me is that it turned out because of a very tragic suicide wave that happened in the 1970s at MIT, they put in a set of rules that in order to fail a student, teachers, professors had to do a lot of extra work and paperwork and prove to the dean that it was really warranted,” Levitt said. “Luckily, my economics professors, they were lazy and they were self-interested and so each of them did the wrong thing.  They gave me a C- and they threw me to the next guy and said, ‘I hope you do the right thing.’”

Levitt turned to his father, a medical researcher who had become a top expert in intestinal gas after his father’s mentor told him he wouldn’t succeed in any other research field.

So Levitt went back to MIT and started researching odd topics like whether abortion reduced crime, cheating by Sumo wrestlers, and the business structure of crack-selling gangs.

Levitt and Dubner were a big hit with Lehigh alumni. Eudora Weedman ’01 said, “They really had some great stories that they were telling, kind of an interesting way to look at the world.”

Weedman, who works for Rodale publishing company in Emmaus, said she appreciated Levitt’s story on how he ended up getting into offbeat economics.

Joel Goldstein ’66, of West Orange, N.J. found the lecture “very entertaining.” He pointed out that Levitt and Dubner made a career out of researching things most people find odd but then take for granted and accept them.

Jeff Fisher ’78, who majored in economics at Lehigh, said the authors showed how economics could be used to study all sorts of problems and gain insights on human behavior.

Fisher and his wife, Colleen, of Rochester, N.Y., said they were particularly interested in Dubner’s discussion of how Cedars-Sinai Medical Center improved staff hand-washing practices because their daughter-in-law at the Medical College of Virginia is working on the same issue.

“I could have listened to them for hours,” Colleen Fisher said.

The “Think Like a Freak” keynote was part of Lehigh University’s Alumni Weekend and Sesquicentennial Close Celebration, which welcomed more than 1,000 alumni and friends back to campus. Other weekend events included traditional reunion dinners and gatherings, a class parade, alumni award recognition, and a Sesquicentennial Finale Celebration featuring entertainment and fireworks.