Frank Troyan: A Passion for Coaching 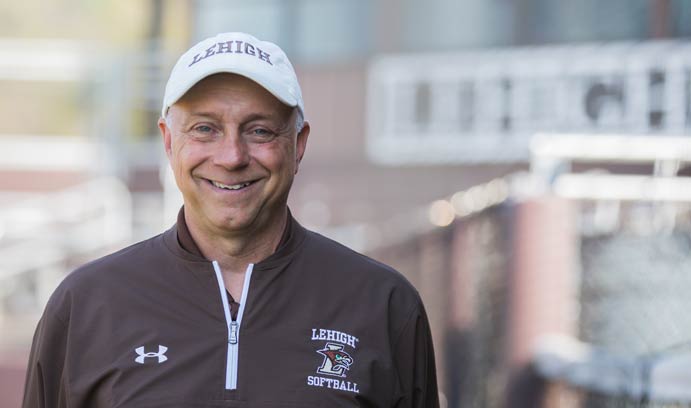 Fran Troyan is one half of Lehigh’s coaching royal couple. He arrived on campus in 1990 to work as a part-time assistant to his wife, Sue, then the head coach of the softball team. In those early years, his day job as an attorney occupied the bulk of his time. But this former collegiate shortstop couldn’t shed sports from his veins, so when Sue became head coach of the women’s basketball team in 1995, and he was offered her old job, he was faced with a difficult deliberation: the courtroom or the diamond?

He traded his loafers for cleats.

“I honestly didn’t mind the trial work at all, but I had a passion for the coaching,” he says.

After 23 seasons running the program, that passion hasn’t waned. The results show it. At the conclusion of the 2018 season, Troyan had an overall record of 781-419-7, including a Patriot League mark of 319-61. He led Lehigh to 19 regular season conference titles, 11 league tournament crowns and 10 NCAA Tournament  appearances. He has coached four Academic All-Americans (Jenny Bender ’03, Lisa Sweeney ’09, Jen Colquhoun ’12 and Morgan Decker ’16), 44 all-region performers and 148 All-Patriot League selections. Seven times he’s been named the Patriot League Coach of the Year.

Troyan, 54, earned his J.D. from the Dickinson School of Law in Carlisle, Pa. That’s where he met Sue, who was an undergraduate at Dickinson College at the time.

“She came over to pretend to study at the law school one day looking for a big payday,” he jokes. “Things couldn’t have worked out worse for her.”

They couldn’t have worked out better for Lehigh Athletics.

Q: What did you learn early on about how to approach coaching Division I student-athletes?
I found out pretty early that it was harder than it looked. The most important part of it was being able to develop trust between yourself and all of the players. To build a relationship takes a lot of time and effort, and I realized that it wasn’t just teaching them how to play softball. Building that player-coach relationship based on trust was the most important thing.

Q: Are there a lot of fundamental differences between baseball and softball?
There are a lot of nuances, a lot of things that are different, but in terms of the fundamentals—catching and throwing and hitting—the basic concepts are the same. I didn’t know any better back when I started teaching hitting; I taught how I knew how to hit. I was almost a heretic back then teaching a baseball swing to softball players. But now, some 25 years later, everybody teaches a baseball swing as opposed to a shorter more compact softball swing.

Softball is a much quicker game, based on the fact that the bases are only 60 feet as opposed to 90 feet apart. There’s less time to think about things, and it is more of a reactive sport. That’s part of the charm of it as well.

Q: What are the most important pillars of your program?
We’re really big about doing the right things for the right reason, whether it’s on a softball field or in a classroom. Building a culture where character is really valued. If you’re by yourself working out, coach isn’t around or your teammates aren’t around, are you working hard?

Q: Is there one specific thing that you demand from your players?
The big thing that we preach is honesty. Honesty with yourself. Can you look yourself in the mirror at the end of the day and say that you gave your best effort? Whether you win or lose, if you know in your heart of hearts that you gave your best effort, you can feel like that day is a success. If each day is a success, you’re going to get a little bit better on a daily basis, and...by the end of the season, you’ve come a long way.

Q: Does any game in particular stand out?
In 2006, when we knocked out Texas A&M to make it to the regional finals, was probably the most thrilling game that we were ever a part of. It was the moment that our program began to be recognized not just as a pretty good team on the East Coast, but we got some national recognition at that point in time.

Q: Why have you stayed at Lehigh for so long?
[Murray H. Goodman Dean of Athletics] Joe Sterrett has created an environment where it’s a great place to be able to raise a family. My wife has had a ton of success. I’ve been very fortunate to have had a bunch of success. I wake up every day and not only am I working with elite athletes, but I’m getting an opportunity to work with elite students and elite people. It’s very fulfilling to see [my players] be as successful after Lehigh as they were at Lehigh.

Q: Have you noticed a change in the way women’s athletics are regarded on a national level?
Twenty-five years ago, if I was at a social gathering and let people know that I was the softball coach at Lehigh, they’d say, Oh, that’s really nice. What do you do with your summers? Now I think people have an understanding that these are elite, big-time athletes.The respect that women get now in softball is much different than it was when I started.

Q: Do you still get as excited for that first day of spring practice as you were in your initial season as coach?
I absolutely do. I still get butterflies before the games. I stress out about the Patriot League Tournament. That has not changed at all. Maybe it’s the fear of failure that motivates me. As soon as it stops becoming exciting for me, I’ll look to do something that does excite me. As of right now, it’s still exciting on a daily basis.

Q: Do your legal skills ever come in handy when you’re arguing with the umps?
They honestly do. When you’re dealing with umps, just like judges, you’re trying to persuade them to see things as you do. I do use some of the things that I have been trained to do in terms of trying to convince umpires that they should look at things from a different perspective, with a different lens. 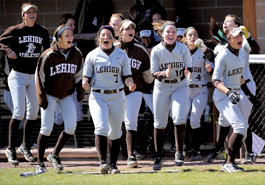