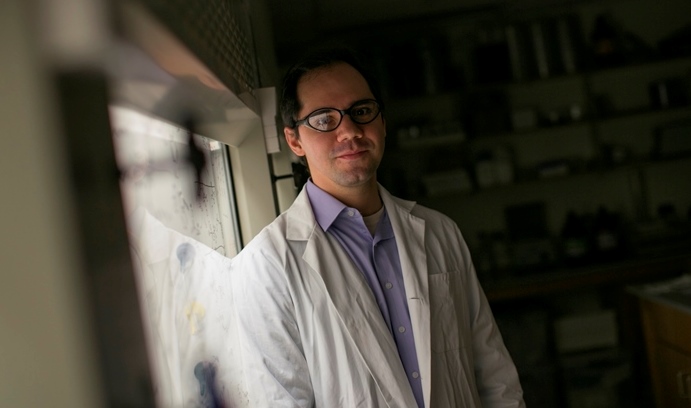 By stimulating the immune system to destroy pathogens, Marcos Pires hopes to develop alternative treatments for bacteria that are resistant to antibiotics.

Every week, faculty members in the department of chemistry meet over lunch to discuss current literature in the field. The conversation at one of these meetings led Marcos Pires to what he calls a “crazy little idea.”

Pires, assistant professor of chemistry, connected studies about a unique characteristic of bacteria with other studies of immune systems that had been trained to attack cancer cells.

Then he wondered: What would happen if the immune system itself could be trained to attack bacteria?

“Unfortunately, a lot of the antibiotics we use now were discovered 20, 30, 40 years ago,” says Pires. “[Back then] we were coming up with new drugs and the bugs didn’t have time to evolve [and develop] resistance. When we stopped making new drugs, the bugs found ways around the drugs. This has been getting worse and worse, and without new drugs coming, it’s projected that it could lead to some really bad scenarios.”

Rather than developing a classic antibiotic that will attack the bacteria itself, Pires is looking to stimulate the immune system to do what it’s supposed to do in the first place—find and destroy pathogens.

Bacteria are made up of amino acids, the building blocks of all living organisms. Pires’ research capitalizes on the discovery of bacteria’s unique use of a particular type of amino acids called D-amino acids. For reasons that are still unknown, bacteria that are contained inside a flask will replace their D-amino acids with unnatural ones that are added to that flask. The bacteria will then incorporate the unnatural D-amino acids onto their peptidoglycan, or cell wall.

In the lab, Pires and his students made unnatural D-amino acid derivatives and tagged them with an antigen that draws a response from a pool of antibodies that most human beings already have. As predicted, the bacteria placed the tagged D-amino acids on their surface, essentially marking themselves for destruction.

Pires then added the antibodies that seek out and bind to that particular antigen and marked them with a fluorescent tag. The tag allowed him to verify that the antibodies had found and coated the surface of the bacteria.

“We wanted to find a way to get the bugs to tag themselves,” Pires says. “It ended up working pretty well.”

Pires and his team have a few hurdles to clear as they move forward. Their initial work required a large amount of the unnatural D-amino acids to get enough antigens on the surface of the bacteria, an amount that would be far too great for use in a drug intended for humans. They’re now trying to reduce the amount of D-amino acids required for the same result, perhaps by changing the antigen used to tag them.

Another challenge is the fact that up until now, every research group that has conducted experiments using this strategy has worked with bacteria in a flask. Nobody knows yet if the swapping of D-amino acids would happen with a bacterial infection in a human.

“The question is still open as to whether what we’ve done is enough to trigger an immune response. We won’t know until we get this into a living organism,” says Pires.

For this next step, Pires plans to work with some basic model systems, starting with fish and, if successful, moving to mice. Financing these more advanced steps can be quite costly, so Pires is working to optimize his research technique before seeking additional funding.

Pires described the results of his research in a recent article in ACS Chemical Biology that he coauthored with Jonathan M. Fura and Mary J. Sabulski, who are graduate students in chemistry. The article was titled “D-Amino Acid Mediated Recruitment of Endogenous Antibodies to Bacterial Surfaces.”

Pires’s research was also was featured in a recent article titled “Enlisting the Immune System to Attack Bacteria,” which was published in Chemical & Engineering News.

He hopes that his research will one day help provide the human immune system with a strategic tool for the biological game of hide-and-seek in which antibiotics are becoming less and less effective.

“Right now it’s just one step beyond a concept,” he says.

But it is one step closer.