Fish swim while a garden grows 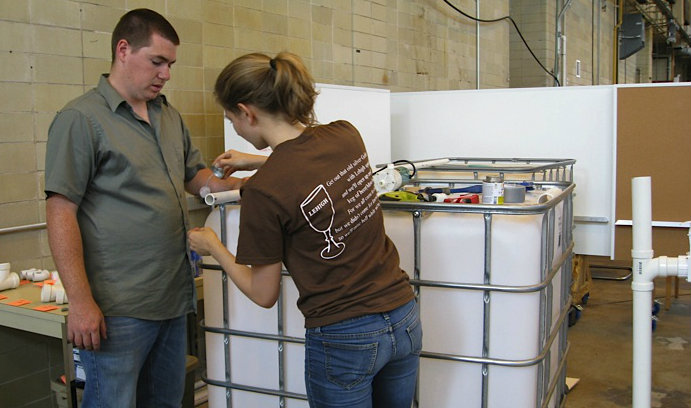 By summer’s end, if all goes well, a group of students plan to serve up food they’ve cultivated in former distillery vats—tilapia on a bed of lettuce.

Until then, the students who are trying to develop a soil-less food production system at Mountaintop are figuring things out.

There are practical matters to tend to: Hauling four 1,000-liter industrial containers to the site from New Jersey, locating a hose to fill the containers with water, and cutting off the tanks’ hard plastic tops.

But there are loftier aims: To cultivate fish while growing plants in water, to help a Peace Corps volunteer in his work in Armenia in southeastern Europe.

“The ultimate goal,” said Alex Derish, one of the students on the team, “is to remotely drop the tanks in an environment that wouldn’t otherwise be able to produce food.”

Welcome to Lehigh Aquaponics, a sustainable development project that is among the mulitple enterprises under way this summer in Building C on the Mountaintop campus. It combines aquaculture (raising fish in tanks) with hydroponics (cultivating plants in water).

“There’s a lot of…’let’s throw it on the wall and see if it sticks,’” said Derish. “It’s a good opportunity for experimentation…and meeting new friends.”

They are inspired, in part, by a proverbial saying jotted on a white board in their sectioned space. The saying was altered by a fellow student to fit their directive: “Give a man a box of food and he’ll eat for a day. Teach a man aquaponics, and he’ll eat for a lifetime.”

The students’ project grew out of a Sustainable Development Solutions class at Lehigh taught by Mark Orrs, professor of practice in the department of political science and director of sustainable development. To expand on that work, the students are developing, on site at Mountaintop, an educational aquaponics system. Orrs, along with Richard Weisman, professor of water resources engineering, are project mentors.

The first container in the newly built system will serve as a large fish tank, where the students will introduce fingerlings they hope will grow to market size. The fish of choice will be tilapia, which, Hetrick explained, are hardy fish that can endure temperature fluctuations and low oxygen levels.

From the fish tank, water will flow through tubes into a clarifier, then into grow beds, where the students hope lettuce will sprout from seedlings. Along the way, bacteria will be introduced to speed up the conversion of ammonia from fish waste into nitrite, then nitrate, to grow the plants.

“Starting the build (of the system) was pretty big for us,” said Schwartz, noting how it had culminated months of discussion. “When we got the Mountaintop internship, it meant a lot to us, because it meant the start of something real.”

Guiding the students in the build are architect Benjamin Walmer ’98, the middle man of sorts to the work being done in Armenia, and Paul Nickerson of The Agrarian Group in Carlisle, who shared knowledge that the students will build on.

Based on their strengths, the students are divvying up tasks—monitoring water quality, exploring the feasibility of the project, managing social media and the like—as they look to push the design of the system beyond what has been done elsewhere. They are hoping to come up with a low-tech solution so that the aquaponics system they develop can ultimately be used anywhere, by anyone.

Education is central to their work. They’d want to not only teach people about how to use their system, but also about the benefits to aquaponics, which include significant reductions in land and water usage.

Schwartz, whose mother practices functional medicine, said he was raised to be curious about where his food came from—and about the quality of the food he ate. He also worked in community-supported agriculture.

Hetrick said that, for her, the project is about the big picture: How do we feed the world’s populations without using as many natural resources as we do now?

The students plan to document their work, with photos, so that they there’s a manual for those who follow. They would like to start a dialogue among campus leaders to, perhaps, establish a functioning aquaponics system at Lehigh, develop curriculum and start a club.

“The goal is really to continue this on, beyond us,” said Schwartz.

Meanwhile, the students are at work, innovating.

“If we build a system and learn something, then we’ve succeeded,” Hetrick said. “As much progress as we can make, we’re going to be happy.” 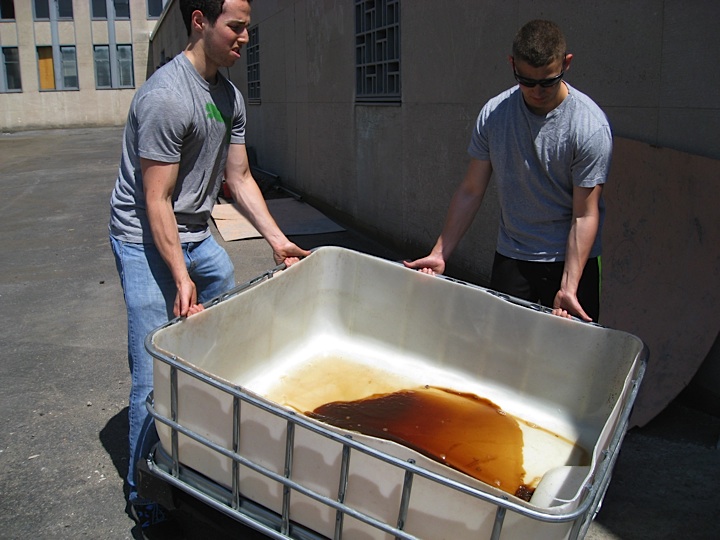 Students Jeff Schwartz and Alex Derish carry a container that has been fitted for the aquaponics system. Photo courtesy of Lehigh Aquaponics.