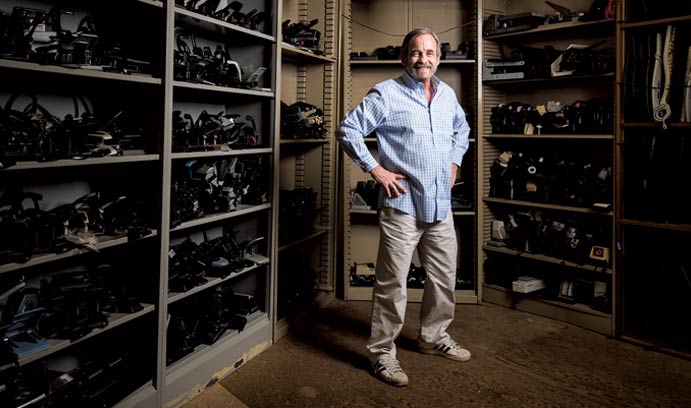 Bert Ball ’76 had a game-changing, eco-friendly idea when he was in the master of fine arts graduate program in the 1990s at UCLA’s School of Theater, Film and Television. Classes were taught by Hollywood bigwigs, and Ball learned from Peter Guber, chairman of Sony Pictures at the time, that the Hook movie set was about to be struck.

Ball arranged for the production staff to take apart Hook’s ship on the set and for $1 million worth of lumber to be donated to a nonprofit organization that works to improve senior citizen housing. The Hook movie received a large tax deduction and the material was not dumped in a landfill—a result Ball describes as a win-win.

Realizing the potential of his concept, Ball began the Materials for the Arts program with funding from the City of Los Angeles. His initiative connected movie donations to the local arts community. Ball recalled that Warner Brothers Studio donated “a half-a-mile of movie sets.”

Soon, the self-proclaimed “artrepreneur” decided to widen the circle to help more in need. He turned the city program into L.A. SHARES, a Los Angeles nonprofit that serves public schools and community organizations.

Since 1991, Ball has been connecting corporations’ unwanted materials with local nonprofit requests. He has developed L.A. SHARES into the world’s largest nonprofit multimillion-dollar waste diversion program.
“I am in the stuff business,” says Ball. “Why bury it if you can give it a second chance?”

That motto, says Ball, has helped more than 4,000 local schools and nonprofit organizations to date while keeping more than 25 million pounds of materials out of landfills.

“We changed the nature of the waste management business. We provide an alternative where it never gets into the waste stream in the first place.”

Harnessing the intersection of business, government, and the nonprofit and educational communities is at the heart of the L.A. SHARES mission. Ball says all areas have something to contribute to and benefit from.

To date, Ball has worked with more than 3,000 companies, including Deloitte Touche LLP and Cushman & Wakefield, to coordinate the donation of more than $180 million worth of goods and materials throughout the Los Angeles area. Thanks to the city’s continued funding, L.A. SHARES does not charge for its services.

“We get more than 1 million pounds of stuff each year … all avoided going into the landfill,” says Ball.

Recipients pick up donations and benefactors receive a tax deduction, and a thank-you note from the recipient. Donations range from file folders and phones to furniture and appliances. Smaller shelf items are kept in two warehouses owned by the city where people can go on “Shopping Day” for carry-out merchandise.

Spreading Sustainability with Help from Lehigh

Ball has taken his concept beyond Los Angeles to Phoenix, Las Vegas, San Francisco and other cities, where he advises officials attempting to create similar materials-reuse programs. But he says his concept cannot work on a grand scale until the process of manually receiving donations and matching donors with charitable organizations is automated and moved online.

Ball, who majored in English and fine arts at Lehigh and minored in technology and human values, knew just where to go for help to develop such an interface computer program—his alma mater.

At a West Coast alumni event, Ball met Mark Orrs, professor of practice and director of Sustainable Development at Lehigh. The two discussed how to make the waste-reuse program work on a larger scale. Orrs and Ron Crane, adjunct professor of computer science and engineering, enlisted Lehigh students to advance the mission of L.A. SHARES.

Crane teaches the two-semester computer science and business (CSB) Capstone Project course in which CSB majors work in teams using the fundamentals of creating websites on projects provided by companies. Ball pitched his ideas at the CSB Capstone project fair in January 2016 and commissioned a team of eight students to begin developing the needed interface platform and to create a user-friendly website.

“My experience made me appreciate how the intersection of technology and communication brings value to society, which is a core idea of the CSB program,” says Byam.

Goals included designing a more user-friendly website for administrative users and regular users (such as profiles for donors and recipients), a new back-end database, and additional visual and functional features. The team did not have time to develop a website template for a web application to provide similar services for other organizations.

Ball, who Skyped regularly with the team, was impressed with the work of the 2016 Capstone group and is confident the 2017 Capstone team will finish the project by December. Team members are CSB majors Pablo Felipe Avilés Ruiz ’18, Stephanie L. Beddow ’18, Matthew S. Buell ’18, Brittany O’Neill ’18 and Holland M. Roza ’18, who are also creating a reporting mechanism that leverages data collected on the website. Reports will be generated that L.A. SHARES needs for nonprofit recordkeeping and its own research.

Bringing IT to the Lehigh Valley

During the summer of 2016, a team of Mountaintop students—Rebecca Woods ’19, Chad Wallace ’17, Anna Putelo ’17 and Sam Evers ’19—worked on LV (Lehigh Valley) SHARES to address the issue of environmental sustainability within the area.

Inspired by L.A. SHARES, the Mountaintop team made connections with nonprofits and corporations to complete a needs assessment with the local business community. Orrs advised the team and Ball served as a West Coast mentor, Skyping weekly and meeting with the students in New York.

When the final product of the 2017 CSB Capstone team is available, says Orrs, a new team of students will use the website and interface platform to address environmental sustainability in the Lehigh Valley through LV SHARES.