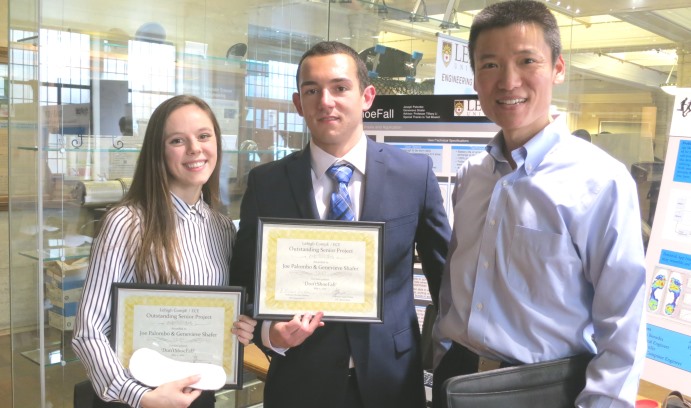 David Brandt ’17 hears two frequent complaints from his neighbors at the retirement community where he lives with his mother: They are constantly losing things, and they have little love for technology.

Justin Bauldock ’17 says his grandmother likes simple, straightforward technology and finds it intimidating to use a cellphone.

Brandt, an electrical engineering major, and Bauldock, a computer engineering major, have teamed up to create a self-contained, low-tech locator system that allows users to find keys, phones or walkers by pressing buttons on a control box that correspond to tagged items that have gone missing.

The two students believe LINT has a critical advantage over locating devices now on the market.

“All the existing technologies require complicated external technology,” says Brandt. “Ours is completely self-contained. You plug it in and it works.”

LINT has a 250-foot range and is designed for indoor use. Users attach tags to items that are likely to be misplaced. The tags ring or vibrate when users press the corresponding light on the control box.

“Our alarm spans the human hearing spectrum,” says Brandt. “If you’re hearing-impaired, you can switch the alarm to a hearing-assisted mode. It will vibrate at increasing rates of speed to tell you when you’re getting close to a lost object.”

The buttons on the control box are large, bright green and designed for easy use. Brandt and Bauldock will continue working on LINT after graduation. They plan several improvements, including a “cat-proof” feature to prevent the control buttons from being activated by the paws of a pet.

“It’s counter-intuitive to make technology for people who don’t like technology,” says Brandt. “But we think we can take this to market.”

LINT was one of 29 projects completed by 58 students in the Senior Design class and displayed on May 5 in Packard Laboratory. Each project defined a problem and offered a new technology to solve it. Taken all together, the projects showcased the breadth of electrical and computer engineering and its impact on healthcare, entertainment, energy, the environment and other areas of everyday life.

“I’ve fallen and I can’t call for help!”

DontShoe Fall is designed for older people who suffer a fall and are unable to send a signal to an emergency responder or healthcare provider. It consists of an insole that fits inside a person’s shoe, detects when the person falls and sends a signal to a responder.

“Falls are very significant,” says Shafer. “They clog up emergency rooms. If you suffer a fall, the sooner you can get help the less at risk you are for complications.”

Existing devices, say Shafer and Palombo, do not work for people who become unconscious or incapacitated by a fall and are unable to activate a signaling feature.

In another project, titled “Smarter Home,” computer engineering majors Will Kavanaugh and Jon Ross, advised by Prof. Cheng, set their sights on the rapidly growing market for devices that interact with human beings.

“The Internet of Things—smart apps for switching lights, music and video—is a booming market,” says Kavanaugh.

Smart wireless devices that interact with humans—lights or music systems that switch on or off as a person enters or exits a room—have long been on the market, says Kavanaugh. Smarter Home enhances this cooperation by customizing smart devices to a person’s individual preferences.

Existing smart devices, say Kavanaugh and Ross, react the same way with every person who enters a room.

“Currently, no solution exists that will automatically control these devices according to individual user preferences as they move throughout a home,” they say.

The Smarter Home app, say the two students, is downloaded into a smartphone.

“A setup page on the app allows you to enter your preferences for music, fans, lights,” says Ross. “As you walk through your home, your devices respond according to your individual preferences.”

“If Jon is already in a [smart] room and I walk in,” says Kavanaugh, “the room keeps doing what he wants. If he leaves the room, my preferences take over.”

Help for the visually impaired

“Electronic Braille Interface,” a project by Katherine Porfirio and Eric Reid, is intended to help the visually impaired read text on a computer screen. An estimated 7.3 million people with a visual disability are living in the United States, said the students, and nearly one-third of them live at or below the poverty line.

Existing devices that help the visually impaired read computer screens include screen reader software and Braille note-takers and cost between $800 and $6,000.

Porfirio and Reid, who were advised by Nelson Tansu, professor of electrical and computer engineering, have filed an Invention Disclosure with the Lehigh Office of Technology Transfer for their device, which contains magnets, pins, motors and bars. The students spent three months 3D-printing and testing their device. They attempted 20 solutions before settling on an approach that uses a gravitational holding system and a writing and resetting system.

Jia Rao and Yinni Jin, who were advised by Prof. Frey, used a signal processing system and programming algorithms to develop a “Music-Driven Light Show Design” that creates LED light patterns that vary with a change of music. The device digitizes analog signals coming from an audio jack and filters the signals into three frequency bands.

“The color of the light that is generated depends on the frequency and volume of the signal,” Rao said.

A user interface lets users choose their own light patterns. The device is also convenient and adaptable to homes as well as larger public places, the students said.

In a project titled “Renewable Energy Boats,” Amber Hutchinson and Jennifer Fowler sought to harvest the potential of large boats to generate energy from waves while they are anchored in the ocean. The students’ system consists of an underwater turbine that turns and powers a motor when it is subjected to pressure from passing waves. The project grew out of a challenge that the students took on two summers ago in Lehigh’s Mountaintop Initiative. The students were advised by Shalinee Kishore, professor of electrical and computer engineering. 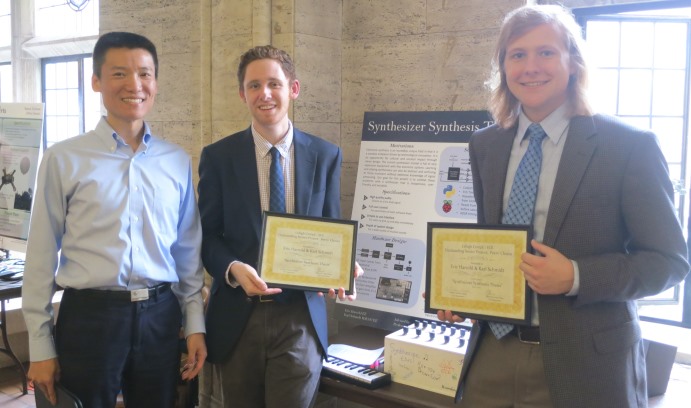 Cheng presents the Peers’ Choice Award to Eric Harrold (center) and Karl Schmidt (right) for their “Affordable Music Synthesizer.” The students were advised by Douglas Frey, professor of electrical and computer engineering. 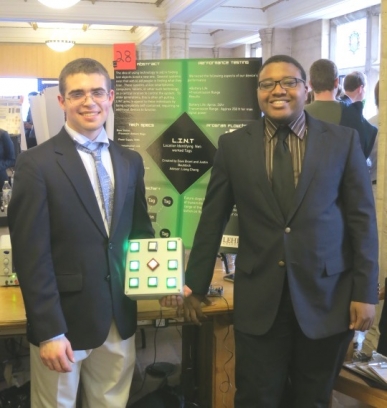 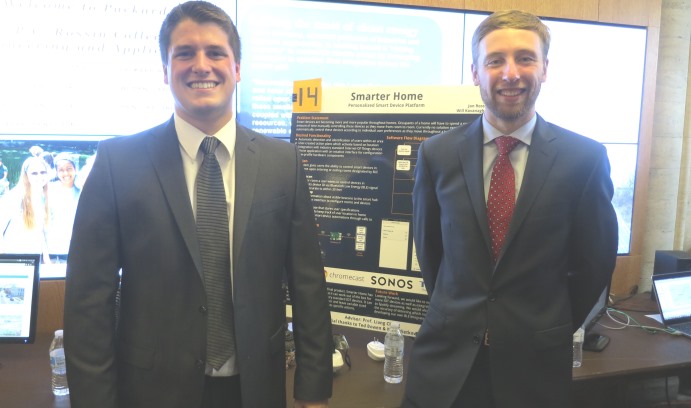 Jon Ross (left) and Will Kavanaugh, creators of “Smarter Homes,” believe the Internet of Things can interact more intelligently with human beings. The students were advised by Liang Cheng. 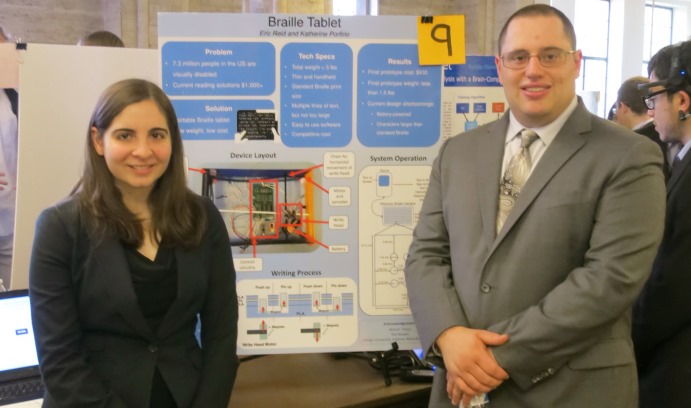 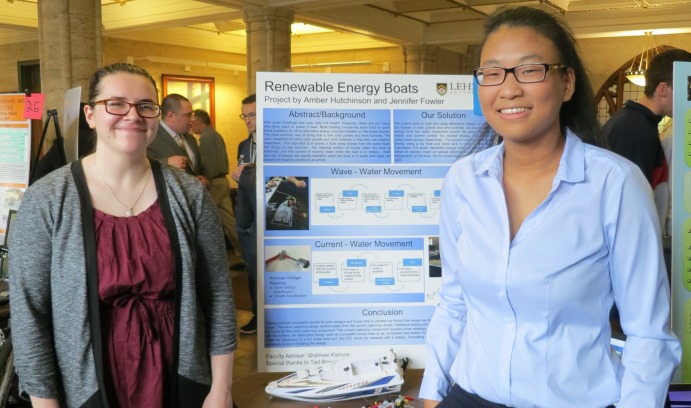 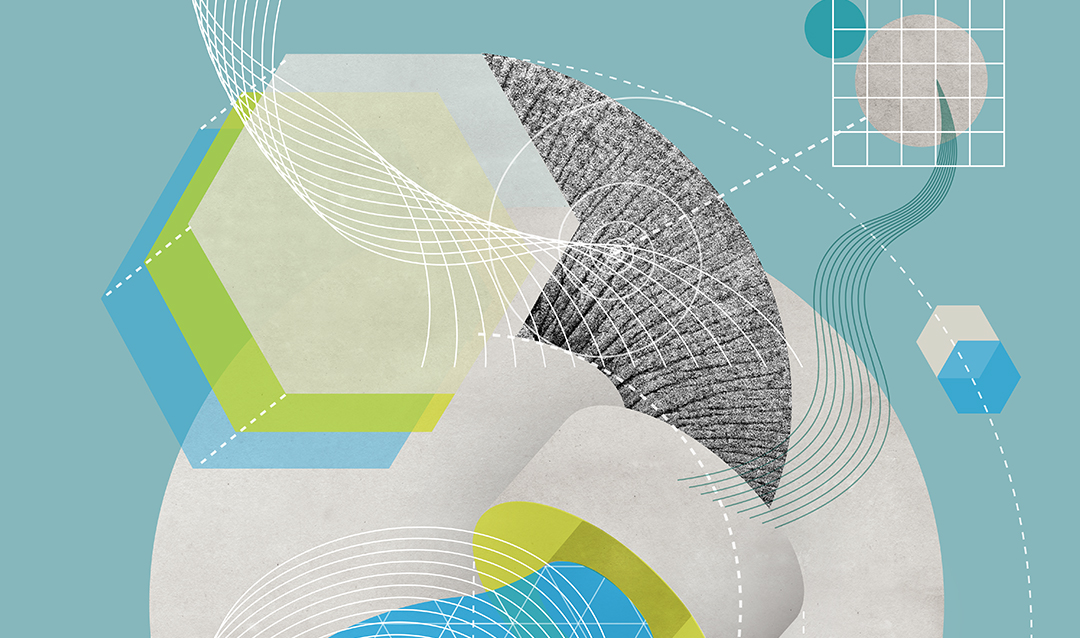