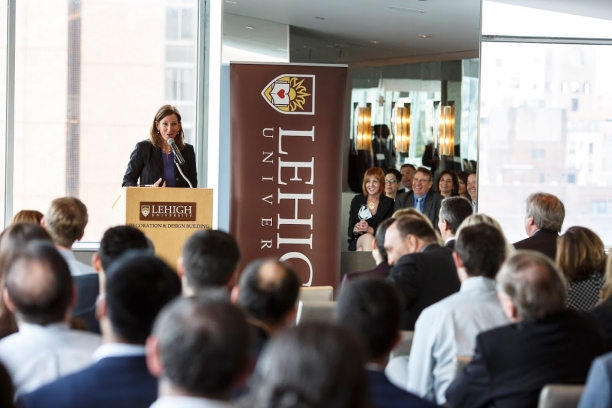 Cathy Engelbert ’86, CEO of Deloitte and the first woman to lead a major U.S. professional services firm, regaled a crowd of more than 120 Lehigh alumni and friends in Manhattan last week, sharing career advice and personal insights at the annual Wall Street Council Spring Reception, which also featured the recognition of Marc Paley ’83 as winner of the James A. Greenleaf Award.

At the reception at the Upper Story on Third Avenue, Engelbert spoke about some of the lessons she’s learned at Lehigh and in business, touching on basketball, artificial intelligence, work-life balance, and how to treat millennials in the workplace. Her wisdom included, “If you get the small things rights, the big things come much easier”; “Shoot when you’re open”; and “Be your best in your darkest moments, and in your most ordinary moments.”

She encouraged leaders to make sure human ingenuity is at the forefront when trying out new tools and technology, including artificial intelligence and automation. “We could all, with technology, sit every day and not get a lot done by responding to emails and texts and looking on Twitter,” she said. “We need to prioritize people over tasks. Our investments are in people, and our R&D needs to go into people.”

More words of advice from Engelbert: “Shoot when you’re open” compared taking advantage of opportunities in business to being on the basketball court. “You need to shift and adapt if another player is injured or if the plays aren’t working,” she commented. Also, she said, “Never graduate,” since lifelong learning is critical to staying on the cutting edge.

At Deloitte, she said, they are working to build a “culture of courage” around inclusion, entrepreneurship, and innovation. Young employees are encouraged to share their ideas for improving the company, and Deloitte is looking at ways to ensure job flexibility throughout the career life-cycle, recognizing that employees in different stages value different benefits. Engelbert credits her time at Lehigh with preparing her for her professional life.

“I wouldn’t be where I am without it. Lehigh is such a great incubator of leaders...I went there shy and came out being able to do a lot of different things in my career,” she said. “It’s important for us all to pay it forward. It’s important that we have role models, and it’s important for us to remember Lehigh in all that we do.”

And the Professor James A. Greenleaf Award Goes to...

The Wall Street Council honored Marc Paley ’83 with the Professor James A. Greenleaf Award. Presenter Michael Connor ’80, member of the Lehigh University Board of Trustees, spoke fondly of Greenleaf, who was responsible for envisioning Lehigh’s Financial Services Lab and the Wall Street Council affinity group.

“We honor his legacy and his many important contributions with this award which is presented each year to a Lehigh alum who had demonstrated leadership and success in the world of financial services but has also made a sustained and passionate commitment to the students, faculty, alumni, and staff of Lehigh and to the goal of constantly bringing Lehigh to new heights,” said Connor.

Paley said he was humbled by the honor.

“I could never figure out how a school that size in Bethlehem, Pennsylvania, could have so many people in financial services and who work on Wall Street and have such successful careers,” reflected Paley. “Watching Jim and the things he did gave me my answer. The reason we are all here, and that Cathy is where she is, is because someone like Jim went to the grassroots. He would use everything in his power to help us get ahead and get what we deserved for the work that we put in.”

Paley continued, “What we owe Jim and other people is carrying that on. That’s why the Lehigh Wall Street Council is so important. Helping other people out, those who are going to come after us...that’s really the legacy of Jim. That’s what motivates me and makes me think about the good times at Lehigh and all the great things that have happened since then. I think when you care about people, you really accomplish something.”

Paley chaired the committee that helped to create the Financial Services Lab and was a key supporter of the effort. He and his wife, Debra, also endowed a fund for faculty in the College of Business and Economics. He has been long involved with the Wall Street Council, presenting the keynote speech for the Financial Services Forum in 2010. He served two terms on the university’s Board of Trustees, as well as on the Dean’s Advisory Council for the College of Business and Economics.

Paley is currently CEO of the Axio Group. He was previously president and CEO of Beacon Trust and also had a long career with Lehman Brothers as Global Head of Equity and Capital Markets.

'A Vibrant and Committed Alumni Community'

During the lively networking event, Andrew Fife ’85, president of the Wall Street Council, spoke about the affinity group’s role in the future of Lehigh.

“There are so many exciting changes taking place at Lehigh currently with President Simon’s Path to Prominence plans at the forefront, and for the last several years, the College of Business has been on a fast track to increased visibility and acclaim,” said Fife. “We feel very strongly that a vibrant and committed alumni community is essential to match the growth at the undergraduate and graduate level, and we have been thrilled to do our part under the leadership of Dean Georgette Chapman Phillips.”

Phillips, the Kevin L. Clayton ’84 ’13P and Lisa A. Clayton ’13P Dean of the College of Business and Economics, shared her gratitude with Wall Street Council members.

“We’ve made great strides in the last three years, and the future could not be brighter for the College of Business and for Lehigh University. We’ve had very good rankings this year, and we’re really starting to get noticed. A lot of that is thanks to you. Our alumni ratings are one of the things that have propelled us to the top of the rankings. For this, I personally say thank you so very much.”

“We are rarely content with the status quo. We’re out looking for new and better ways to have a positive impact on the Lehigh community as a whole and the student body in particular.”

The crowd included faculty members Nandu Nayar, director of the Financial Services Lab, and Kenneth Sinclair, who was a professor both of Engelbert and of Paley. Head women’s basketball coach Sue Troyan and Roseann Corsi from the Athletics Partnership also attended. 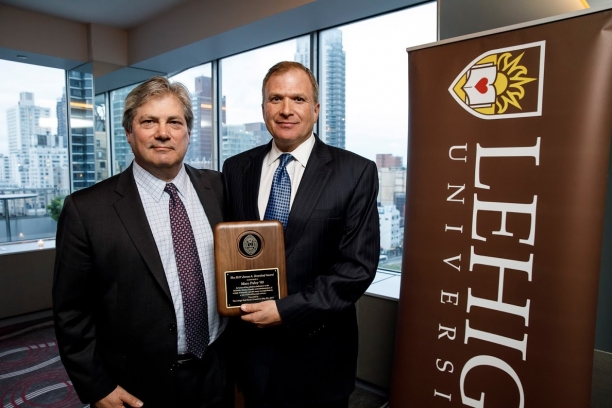 Save the Date for Upcoming Wall Street Council Events

See photos from the 2017 spring reception

Learn about the Wall Street Council