After a 27-year career as professor and department chair of industrial and systems engineering, including a decade as dean of the P.C. Rossin College of Engineering and Applied Science, S. David Wu is leaving to become provost of George Mason University in Virginia.

Wu leaves a legacy of new interdisciplinary endeavors and professional master’s degree programs that are tailored to global needs, and an expanded menu of research opportunities for undergraduate students. His inspiration came from a vision of “engineering as Renaissance thinking for the technology era,” which he set forth when he was appointed dean in 2004 and reiterated this spring in Resolve, the engineering college’s research magazine.

“David Wu,” said Patrick Farrell, provost and vice president for academic affairs, “has been a major contributor to Lehigh as a faculty member and as a dean. We wish him all the best.”

“I am thrilled to start the next phase of my career at George Mason,” Wu wrote in Resolve, which he founded in 2006. “But I will miss Lehigh dearly. After almost three decades here, I owe my sincere gratitude to the mentors, colleagues, students and friends with whom I have worked side by side to build something truly special and distinctive. Together, I believe we have made a real and positive impact on the lives of young people.”

Wu built on a foundation laid by previous Lehigh engineering deans, including John Karakash (1966-80), who often said, “Lehigh doesn’t educate students in engineering but through engineering.”

“The remarkable support from my colleagues has enabled us to work toward a bold vision of the engineer as Renaissance person for the 21st century.” 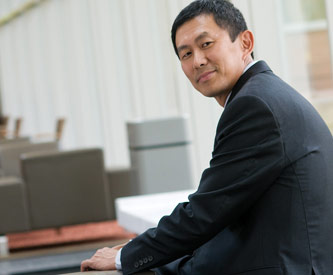 The initiatives launched during Wu’s deanship (2004-14) include: