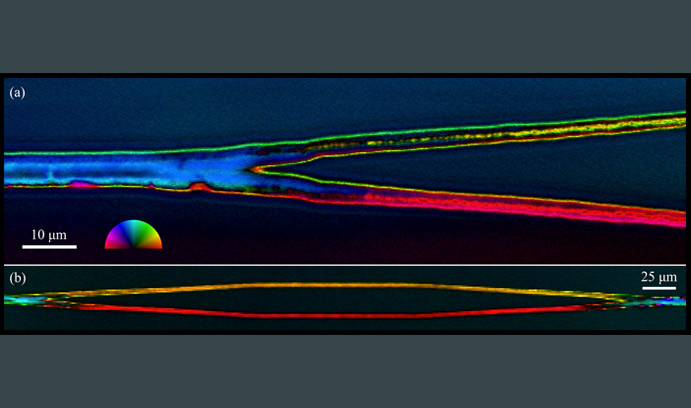 A polarized light field microscope image shows crystal junctions written inside glass with a femtosecond laser. Upon divergence (a), independent lattice orientations develop in each branch and are retained (b) as the branches merge back into a single line. The color wheel indicates the angle of the fast or slow axis of birefringence.

Researchers from Lehigh University, Japan and Canada have advanced a step closer to the dream of all-optical data transmission by building and demonstrating what they call the “world’s first fully functioning single crystal waveguide in glass.”

In an article published in Scientific Reports, a Nature publication, the group said it had employed ultrafast femtosecond lasers to produce a three-dimensional single crystal capable of guiding light waves through glass with little loss of light.

The article, published May 19, is titled “Direct laser-writing of ferroelectric single-crystal waveguide architectures in glass for 3D integrated optics.”

“A major trend in optics,” the researchers write, “has been a drive toward…replacing systems of large discrete components that provide individual functions with compact and multifunctional PICs, in much the same way that integration of electronics has driven the impressive advances of modern computer systems.”

A need for 3D fabrication techniques

To make this transition, however, improved methods of fabricating 3D PICs are needed, the researchers say.

“The methods currently employed for fabricating PICs are photolithographic and other processes suitable for planar geometries,” the researchers write. “3D PIC fabrication techniques would enable a much higher density of components and much more compact devices, while at the same time creating opportunities for new technologies such as high density 3D optical memory.”

To fabricate 3D PICs, say the researchers, it is necessary, first, to prevent light from scattering as it is being transmitted and, second, to transmit and manipulate light signals fast enough to handle increasingly large quantities of data.

Glass, an amorphous material with an inherently disordered atomic structure, cannot meet these challenges, the researchers say. Crystals, with their highly ordered specific lattice structure, have the requisite optical qualities.

“The ability to pattern nonlinear optical crystals in glass is therefore essential for 3D laser-fabrication of PICs to achieve its full potential.”

Scientists have been attempting for years to make crystals in glass in order to prevent light from being scattered as light signals are transmitted, says Jain. The task is complicated by the “mutually exclusive” nature of the properties of crystal and glass.

Glass turns to crystal when it is heated, says Jain, but it is critical to control the transition.

“The question is, how long will this process take and will we get one crystal or many. We want a single crystal; light cannot travel through multiple crystals. And we need the crystal to be in the right shape and form.”

After conducting experiments at Lehigh and at Kyoto University and Polytechnique Montreal, the group built a single crystal in glass, demonstrated its waveguiding capabilities and quantified its transmission efficiency. The glass and crystal both were composed of lanthanum borogermanate (LaBGeO5), a ferroelectric material.

“We achieved quality,” says Dierolf, “by guiding light from one end of the crystal to the other with very little loss of light.

“We have made the equivalent of a wire to guide the light. With our crystal, it is possible to do this in 3D so that the wire—the light—can curve and bend as it is transmitted. This gives us the potential of putting different components on different layers of glass.”

The fact that the demonstration was achieved using ferroelectric materials is another plus, says Dierolf.

“Other groups have made crystal in glass but were not able to demonstrate quality,” says Jain. “With the quality of our crystal, we have crossed the threshold for the idea to be useful. As a result, we are now exploring the development of novel devices for optical communication in collaboration with a major company.”

The femtosecond laser provides several critical advantages, say Dierolf and Jain. The high intensity of the laser pulse enables nonlinear optical absorption. The precise focus enables researchers to control where the laser is focused and where light is absorbed.

“We can heat the glass only locally,” says Jain, “creating the desired conditions and causing the glass to melt, or almost melt, until it is transformed into a crystal.”

The unique focus of the femtosecond laser also makes it possible to “write” the crystal inside the glass and not on its surface.

“We don’t want to write on the surface, only deep inside the glass,” says Jain. “Somehow, you have to get the laser inside the glass before you turn it on. We do that by exploiting a property of the femtosecond lasers—that only at the focal point of the laser is there sufficient intensity to cause the change you want.”

The nonlinear absorption of light, says Dierolf, depends on the intensity of light in selected areas.

“If you double the intensity of the laser, you might get 20 to 100 times more absorption. You can do this with femtosecond pulses that are very intense for a very short period of time. Kyoto has a special lab for this. We have now received a CREF [Critical Research Equipment Fund] grant from Lehigh to set up that kind of facility here.”

Researchers at Lehigh have worked for more than ten years on the project, says Jain. The project got its start in Lehigh’s Center for Optical Technologies (which has since merged with the Sherman Fairchild Center for Solid State Studies to form the Center for Photonics and Nanoelectronics) with support from the Pennsylvania Department of Community and Economic Development. Subsequently, NSF has provided funding for the work at Lehigh and, through Lehigh’s International Materials Institute for New Functionalities in Glass, for the international collaborations as well. Jain is the director of the IMI-NFG.

The article’s other authors are Kiyotaka Miura, Kazuyuki Hirao, Masaaki Sakakura and Yasuhiko Shimotsuma of Kyoto University, and Raman Kashyap and Jerome Lapointe of Montreal Polytechnique. 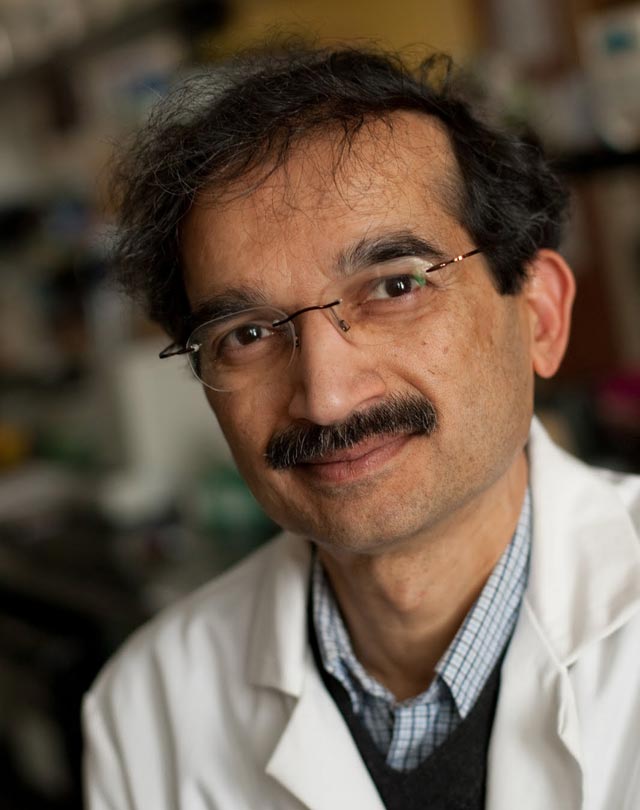 As glass changes to crystal under heat, says Himanshu Jain, it is vital to control the transition in order to end up with a single crystal of the requisite shape and form. 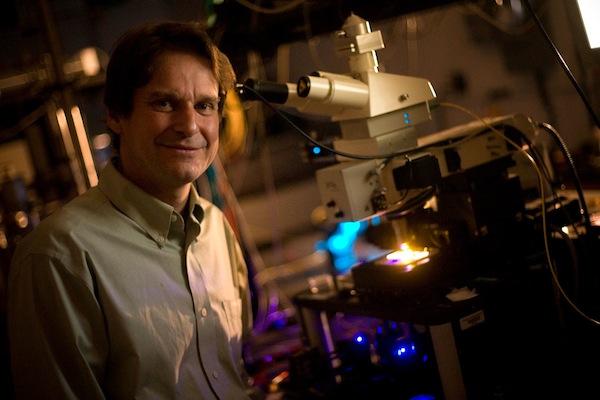 The single crystal obtained by the Lehigh researchers, says Volkmar Dierolf, acts like a wire, enabling a light wave to bend and curve as it is transmitted from one end of the crystal to the other.