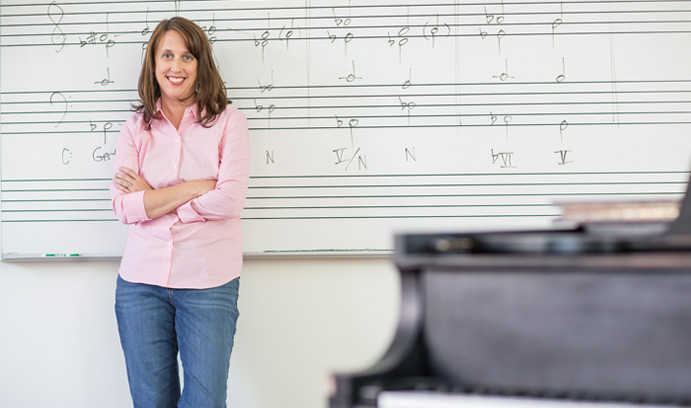 Heather Gilligan ’96 once wrote an orchestral work that united Chinese musicians, the Grand Canyon and YouTube. First she watched online video to determine the playing capabilities of the high schoolers in Hong Kong. Then she composed a piece that challenged them gently yet firmly. Mixing familiar Asian tonalities with less familiar American strains, she steered them to simulate the sensations of soaring over the Grand Canyon and other national natural monuments.

The Chinese youngsters premiered Flights Ascending in April during an international music festival at another national monument: the Kennedy Center for the Performing Arts in Washington, D.C. For Gilligan, the cinematic soundscape capped a momentous year of adventurous projects. She debuted a choral work in Carnegie Hall, christened pieces for a string quartet and percussion septet and began recording the first CD of her compositions. All the while, she taught full time at Keene State College in New Hampshire, where she plays piano and runs a lively center for composers on and off campus. She doesn’t just compose music; she composes communities.

Gilligan grew up in Germansville, Pa., the child of teachers, including Thomas Gilligan III ’68. In high school, she played classical piano and field hockey, winning a state championship as a junior. At Lehigh, she majored in chemistry and minored in music, performing in various groups and sharing the university’s first senior recital. She took one composition course and had two compositions premiered. She christened her piano trio with violinist Paul Chou, the founding conductor of the Lehigh Philharmonic Orchestra, and French horn player Michael D’Ambrosio ’96, today a fellow teaching composer (at Murray State University in Kentucky).

Gilligan received key advice from composition teacher Paul Salerni, a prolific writer of eclectic scores. The longtime Lehigh professor told her that she should pursue music professionally “only if it’s your only choice.” He guided her to the Longy School of Music in Boston, where she played in chamber ensembles while working as a research chemist. In 1999, she quit her chemistry job to enter the school’s piano performance program. A course in writing for musicians compelled her to switch her major to composition.

Longy became Gilligan’s first compositional laboratory. It was there that she wrote her first string quartet and her first work for mezzo-soprano and chamber orchestra, which was her only piece for narrator and computer. Her palette became more poetic while enrolled in Boston University’s doctoral program in composing. She arranged poems by everyone from William Blake to E. Ethelbert Miller, an English professor, editor and African American archivist. One of her Miller settings was featured during a 2005 Lehigh celebration of the late composer Earl Kim, Salerni’s mentor.

Gilligan finished her doctorate on time despite excruciating headaches and severely limited mobility caused by a tear in the dura matter, the membrane cushioning the brain and spinal cord. Unable to stand up straight, she wrote her dissertation, a piano concerto, on a laptop flat on her back.

Gilligan was teaching at Keene State College when surgery ended her three-year ordeal. Since then, her commitment to healthy collaborations has become healthier. She’s had several significant works commissioned by the Boston Composers’ Coalition, a five-year-old, seven-member group devoted to new American music. The coalition co-sponsored Flights Ascending and I’ll See You in the Morning, which debuted during a 2014 choral festival at Carnegie Hall. Gilligan based the a cappella score on a children’s book that she and her husband read to their daughter every night during her first six months.

Gilligan has a sizable stable of musicians who double as exceptional soloists and teammates. She and soprano Margot Rood first collaborated in 2011, when Rood and seven other female singers performed new settings of a Latin Mass section by Gilligan and five other composers. Impressed by Gilligan’s “gorgeous” rendition of the Dona Nobis Pacem, Rood asked her to score poems by Sara Teasdale, the first woman to win a Pulitzer Prize for poetry. Their project, Living in Light, is the titular centerpiece of a CD of Gilligan’s compositions she plans to release in 2016.

Rood praises Gilligan as an open-minded, open-tuned, true-blue partner. Another Gilligan fan is Christopher Swist, the engineer of Living in Light and a fellow composing teacher at Keene State. Over six years, they’ve premiered each other’s works, founded a contemporary-music ensemble and expanded Gilligan’s initiatives. Launched in 2011, an annual call for scores based on themes—concert band, sustainability—has drawn as many as 70 submissions, 17 from overseas composers. Launched in 2013, a more demanding degree in composition has increased the number of student composers from two to 17. Thanks largely to Gilligan’s ambassadorship, a small, rural state school has become a magnetic sanctuary for concerts of new works and workshops with veteran composers like Salerni.

“Heather’s dedication to collaboration has raised everybody’s game,” says Swist. “She has definitely put the program on steroids.”

Gilligan claims she’s at peace with composing, an often painful process. “I don’t always like what I write, but I don’t get myself into a dark abyss knowing the piece has failed to get to the other side,” she says. “I have a pretty stable life so I don’t need to draw on instability or dysfunctionality. I prefer to deal with musical materials rather than deconstruct my life.”

Gilligan has the same mission whether she’s writing Eight Songs on the Progress of Women or a “dialogue” for solo flute. “I’m trying to find the balance of boundaries without pushing them too far,” she says. “I don’t want my music to be only understood or appreciated by people in my field. I want it to be challenging and accessible, to live on its own.”

Gilligan plans to work on a piece that will be christened in March 2016 by East Winds, a Lehigh woodwind quintet, along with new compositions by Salerni, D’Ambrosio, Tae Sakamoto ’02 and John Heiss ’60. She hopes to write a score inspired by her singing and dancing 3-year-old daughter, Gretchen, who loves to frolic at an organic dairy farm managed by her father, Alan Bettler, an environmental biologist Gilligan befriended in high school.

“I’m certainly not going to write music more accessible for her,” says Gilligan of Gretchen. “I’m more likely to write music to train her ears to make her appreciate music that’s less accessible. Pieces in response to her, about her. Pieces she might not listen to but that capture her movements and her moods.” 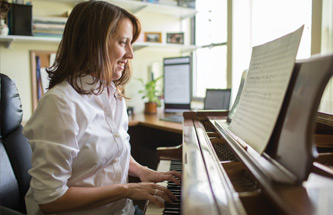 Gilligan, whose compositions have been performed at the Kennedy Center and Carnegie Hall, seeks to write music that is challenging yet accessible to a variety of audiences and performing groups.