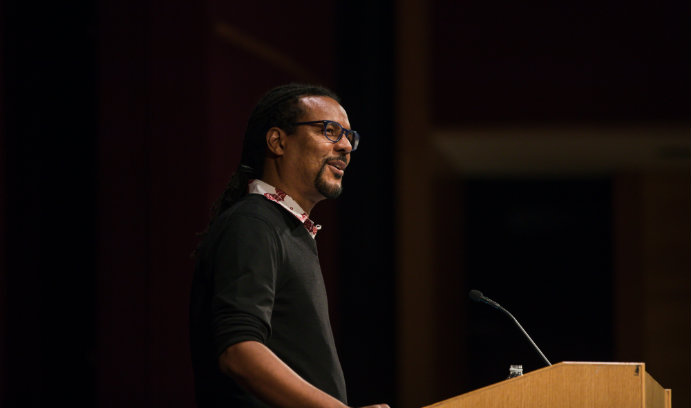 Calmly striding to the podium on the Baker Hall stage, Pulitzer Prize-winning author Colson Whitehead surveyed the sizable crowd and said, “This is nice….I usually spend Tuesday nights at home in my apartment, weeping over my regrets, so this is a nice change of pace.”

With that wry comment, Whitehead signaled that his talk–the culmination of a year of programming organized by the university’s MLK Committee–would be a delightful departure from traditional lectures. Self-deprecating and candid, Whitehead spent as much time discussing his personal shortcomings as he did the novel that earned glowing praise from critics and cemented his position in contemporary literature.

“I was born a poor black child, spending time on the porch with my family, just a-singin’ and a-dancin’ at our home in Mississippi,” he said. “Or maybe that was Steve Martin in ‘The Jerk.’ ”

Whitehead was, in fact, raised in Manhattan and went on to Harvard, where he says he presented himself as a writer– “Well, at least I wore a lot of black and smoked cigarettes” –until he attempted to craft captivating prose. “Apparently,” he said, “writing is a part of that.”

After suffering countless early rejections from editors and in creative writing classes, he took a job with the Village Voice to write reviews of television, books and music while still attempting more serious literary pieces.

“I started to think that maybe I wasn’t cut out for this writing thing and maybe I should try something else. I had parents who believed that I should uplift the race as an able-bodied black man, but I wasn’t really cut out for certain kinds of work. Look at these slender, delicate, feminine wrists,” he said, holding up his hands.

“I couldn’t be a pianist because there is no lumbar support on the bench. And I couldn’t be a hand model since I’m way too personally conservative to indulge in the model lifestyle. Then I thought about being a surgeon, and I was all set to go until I heard about how hard surgeons work. Half the reason I went into the writing business was so I could sit on my ass all day.”

It wasn’t long before he embraced his “moody artist DNA” and re-set his life course, breathing life into a broad range of subject matter that included an elevator inspector (The Intuitionist), a folkloric steel driver (John Henry Days), the World Series of Poker (The Noble Hustle: Beef Jerky and Death) and post-apocalyptic Manhattan (Zone One). Of that book, Whitehead said he was inspired by a vision of a perfect New York City: “You know, everyone’s dead, and you can finally be alone and not be bothered anymore.”

His 2016 book, The Underground Railroad, was driven, in part, by inspiration from a list of writers that included Eric Foner (Gateway to Freedom: The Hidden History of the Underground Railroad, and Harriet Jacobs, whose book Incidents in the Life of a Slave Girl stuck with him since high school. He was also deeply moved by Toni Morrison’s Beloved, which he picked up after 30 years and found it “so good that I thought, “You can’t really do better than this.’ ”

In The Underground Railroad, Whitehead wove the story of Cora, a teenage slave who lived on a Georgia plantation in the mid-19th century before she escaped to seek her freedom. Along the way, she is dependent upon a network of both black and white activists who aided fleeing slaves in the decades prior to the Civil War.

His book won broad critical acclaim, with the New York Times describing it as a “potent, almost hallucinatory novel that leaves the reader with a devastating understanding of the terrible cost of slavery.”

In addition to the Pulitzer Prize, his book earned a National Book Award, the Carnegie Medal for Fiction, the Heartland Prize, the Arthur C. Clarke Award and was a finalist for the Kirkus Prize. Published in 2016, it was a Number 1 New York Times Bestseller, propelled in part by endorsements by Oprah Winfrey and President Barak Obama. It has been translated into 40 languages and shared in book clubs around the world.

Whitehead shared two passages from the book that underscored both the gruesome brutality of Cora’s experience, and the sense of hope that propelled her journey toward freedom–as well as spotlight the unique experience of young women who were kept as slaves.

Following the talk, Whitehead fielded a series of questions on various subjects, including his tastes in music (“a 3,000-song playlist that goes from Run DMC to Edith Piaf”), his thoughts on restricting books in public libraries (He’s against it), the potential to use theatre to affect social and political change and his preferred methods for research.

To that last query, he said that he can spend up to a full year on research, often drawing on digitized history sources and entomological data bases to discover, for example, the unique characteristics of different regions, when slang terms were introduced or what modes of transportation might be used over different historical eras.

“But I do that all online,” he said, “because I don’t like to leave the house, because I really want to avoid contact with people, if at all possible.”

A primary motivation for writing Underground Railroad, he said, was gaining an understanding of how the country was impacted by the brutality of slavery. His first exposure to the subject came while watching the widely acclaimed 1970’s mini-series, Roots, with his family.

“It made me realize that it’s an accident that I’m even here,” he said. “It’s really just a matter of luck that my ancestors weren’t killed in the Middle Passage or on a plantation somewhere.

‘As close to a miracle as a book can be’

Whitehead was introduced by Associate Professor of English Stephanie Powell Watts–also an acclaimed and accomplished novelist–who expressed her own excitement to precede a writer whose work has been described as “brilliant, thrilling, beautiful and heart-stopping.” Watts said she shares the opinion of many that Whitehead’s lyrical and sometimes fantastical story of Cora is “as close to a miracle as a book can be.”

Professor of Religion Studies and University Chaplain Lloyd Steffen, who co-chairs the MLK Committee with Office of Multicultural Affairs Director Dahlia Hylton, welcomed those who gathered in Baker Hall in early March.

Whitehead’s talk, Steffen said, was a highlight of a year-round focus on issues related to social and racial justice in honor of the work of Martin Luther King. The MLK Committee’s programming theme this year and next is “Race-X,” which examines the intersection of race with a broad spectrum of issues. 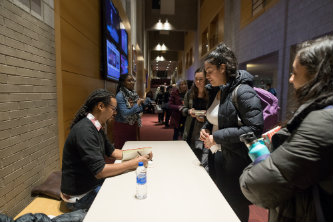 Whitehead signs book copies following MLK talk. Many of those who lined up were students who participated in several book discussion groups across campus in anticipation of his visit to Lehigh. 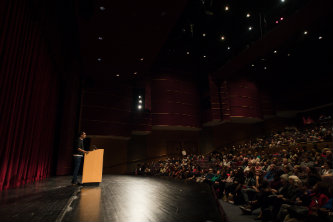 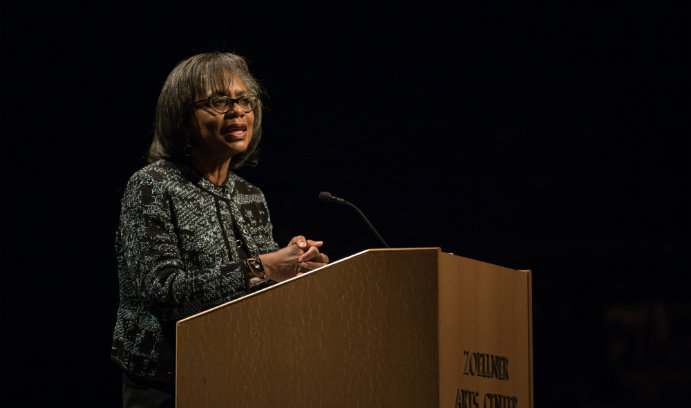