C.J. McCollum: Anything Is Possible 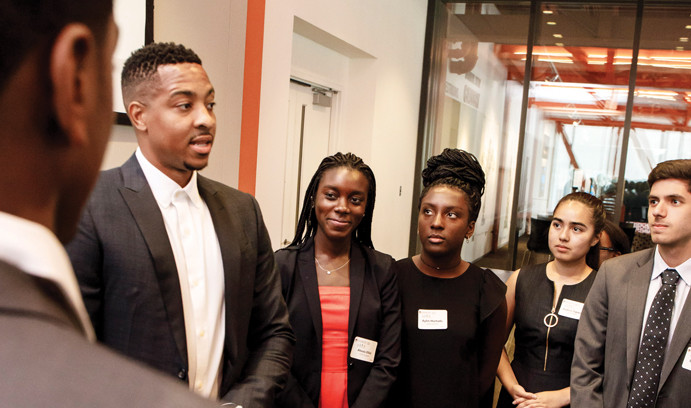 “The most successful people aren’t afraid to fail.”

That’s a message that Portland Trail Blazers standout C.J. McCollum ’13 delivered to teens participating in the Leadership, Education And Development (LEAD) program hosted by the College of Business and Economics in July for the second consecutive summer.

“That is the great difference between the great athletes, the great businessmen, the great entrepreneurs,” McCollum told the students. “You have to be self-conscious and understand who you are and what you are … but you have to be willing to take risks. ... Don’t be afraid to go left when everyone is going right.”

McCollum, who also emphasized that anything is possible, was the keynote speaker at LEAD’s closing dinner at the ArtsQuest center at SteelStacks.

This year, 28 rising high school seniors from across the country participated in Lehigh’s three-week LEAD program, which strives to prepare students from diverse backgrounds for college, expose them to career options and develop them into responsible leaders. The program also introduces the students to the Lehigh campus.

Just 4-foot-8 in eighth grade, McCollum nonetheless dreamed of making it to the NBA. By the start of high school, he said, he had grown to 5-foot-2 and weighed 107 pounds. Though he focused on his athletic performance, he often scored only 6 points per game.

McCollum said he considered giving up basketball to focus solely on receiving an academic scholarship—and he prayed that he would grow three to four more inches.

By the start of his junior year in high school, he was 5-foot-11. He was excelling academically, but he was not receiving any basketball scholarships.

McCollum’s pivotal moment in his high school career came when he scored 54 points in one game. Three days later, he received his first letter of interest from Lehigh. Though he received more letters from prospective colleges, Lehigh remained his top choice.

“Lehigh was my number one school because it was the first school that showed interest in me and because of the academic reputation,” he said.

In 2009, McCollum signed to attend Lehigh as a Division 1 athlete. He began his academic studies in the College of Business and Economics, but he said he very quickly realized that business wasn’t his forte and that he enjoyed journalism. He switched to the Department of Journalism and Communications.

McCollum finished his Lehigh career as the Patriot League’s all-time leading scorer. And his basketball dream became a reality: On June 27, 2013, he was selected to play with the Portland Trail Blazers as the 10th pick in the NBA draft. He averaged 23 points per game for the team last season

“The harder I’ve worked,” said McCollum, now 6-foot-4, “the luckier I’ve got, both on the court and off the court.” 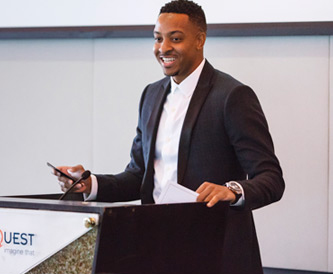 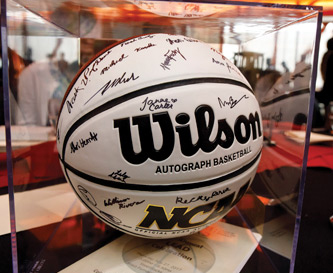 McCollum was given a signed basketball from the students as a gift.