Bridging the gap between D.C. and the academy 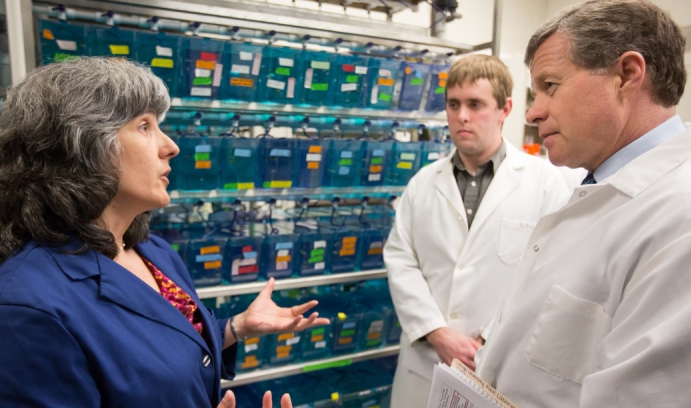 The Falk Laboratory in the department of biological sciences is filled with compelling items. Postcards from past and present lab workers are displayed on one wall, representing countries from all over the world. A white board on a refrigeration system is labeled “Wish List.” And in large letters, another sign declares: “Our research is targeting: heart disease, deafness, cancer, cataracts.”
The lab is home to Matthias Falk, associate professor of cell biology at Lehigh, and his current research team of three undergraduate students, three grad students, and two postdocs. Falk’s lab studies gap junctions, the cellular structures that allow communication between neighboring cells.
One team member, graduate student Charles Fisher, went to Washington, D.C., last September as part of Capitol Hill Days, an event sponsored by the Coalition for the Life Sciences to connect scientists with their representatives in Congress.
“I’ve always been interested in policy,” says Fisher. “I also like helping people understand science.”
In Washington, Fisher visited the offices of two Pennsylvania Congressmen—Charles Dent, R-15 and James Gerlach, R-6. He sent personal emails inviting each to visit Falk’s lab in hopes of gaining their support for research in the life sciences. Dent, whose district includes the Lehigh Valley, responded and visited the lab on March 19th.
Making the case for basic research
Fisher’s trip was prompted by his concern over the decline in federal funding for basic research, which has dropped in the past decade.
Basic research, says Fisher, aims to improve knowledge of the physical and natural world. It does not necessarily result in the immediate creation of a new product but it can start the long-term process that may eventually lead to the development of one.
“Basic research is really exploratory, like unraveling one giant puzzle,” Fisher says. “We are trying to understand how an exceptionally small part of the universe works, and more often than not, it takes a long while before our work bears fruit.”
Gap junctions are crucial for a number of reasons, one of which is for proper heart function, which relies on cell communication so that each individual heart cell knows when it needs to “beat” and that the whole heart can then beat as one. When a person has a heart attack, one of the problems is that the signal telling the heart to beat is not being propagated. Similarly, cancer cells usually have decreased levels of gap junctions, and evidence suggests that the loss of communication between cells is a significant contributor to carcinogenesis.
Like other researchers, the Falk group relies heavily on outside support to fund a variety of expenses, from the one-time acquisition of microscopes and other equipment to the salaries of postdocs and graduate students to the day-to-day purchases of dishes, chemicals, rubber gloves and other necessities.
“What’s sad,” said Fisher, “is that in some labs that are struggling for funding, the rubber gloves take precedent over the people who work in the lab.”
“The low rate of funding is really discouraging for us younger scientists,” said Anastasia Thévenin, one of the postdocs in Falk’s lab. “We want to continue our careers—we have a lot of aspirations—but there’s no guarantee that we can with so little support.”
Dent, a former development officer for Lehigh who earned an M.A. in public administration from the university in 1993, toured the labs of three other professors in the department of biological sciences. Lynne Cassimeris studies the cytoskeleton, Julie Haas studies the plasticity of electrical synapses in the brain, and Kathy Iovine investigates zebrafish as a model for human bone development.
The congressman concluded the tour by conversing with graduate students Stefan Oline and Sara Lynn Farwell, whose labs receive funding from the National Institutes of Health (NIH) to support their research.
Dent, who stayed a half hour longer than scheduled, said he appreciated the opportunity to visit the labs and meet the professors and students doing important foundational research.
“The work being done here demonstrates why funding of basic research is worth fighting for,” he said. “It’s moving our understanding of the biosciences forward and it could mean discoveries that will benefit human health.” 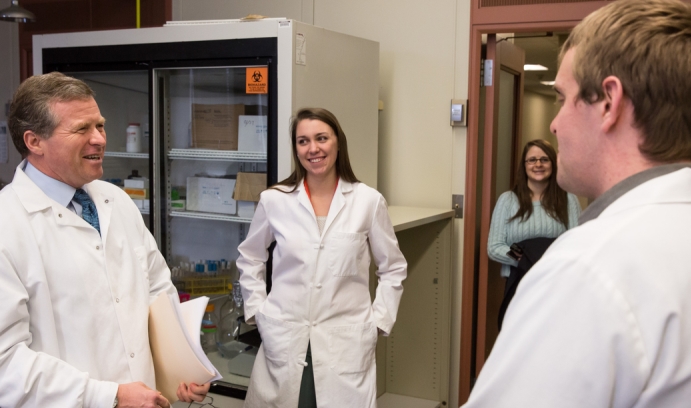 Arriving at the department of biological sciences, Dent is greeted by Fisher (right) and graduate student Sara Lynn Farwell. 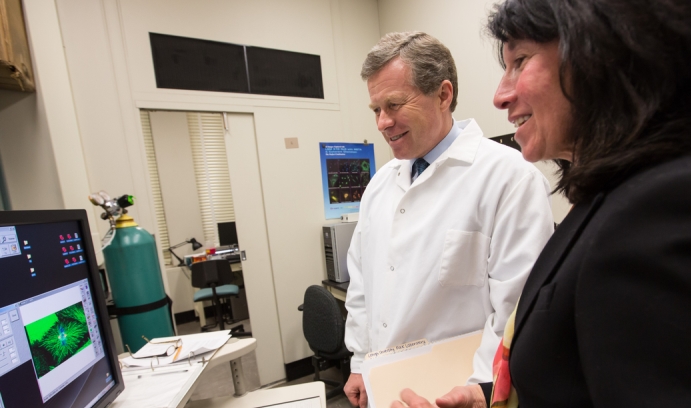 Lynne Cassimeris, professor of cell biology, gives Dent a brief explanation of her investigations into cell growth and cell division.