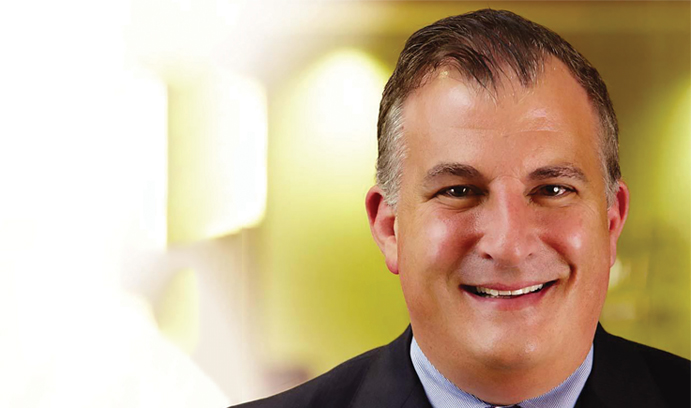 Ernie Dianastasis ’78 ’79 MBA is staking his reputation—and life savings—on a business venture that aims to employ 10,000 people with disabilities by 2025. Photo: Contributed

More than 30 years ago, Ernie Dianastasis joined a startup information technology company and helped lead its growth from a business incubator to a worldwide leader in the industry.

One might expect that after three decades at Computer Aid Inc., Dianastasis ’78 ’79 MBA would be preparing himself for retirement. Instead, he has staked his reputation—and life savings—on a new business venture with an ambitious goal of employing 10,000 people with disabilities by 2025.

The Precisionists Inc. is an outsourcing and consulting company that provides technology and administrative services with teams composed primarily of individuals with disabilities.

Only a year into its development, the company has so far focused primarily on employing individuals on the autism spectrum in its Wilmington, Delaware, operations center.

Through personal experience, Dianastasis said he has found that individuals with autism can be highly proficient at technological skills, such as software testing, email surveillance and circuit board assembly, if given the proper training and opportunity.

“It would not work if it was just charity,” he said. “It has to contribute to the performance of the company, and that’s exactly what these folks do. They come in and they do a phenomenal job. But they have to be given the right training and the right preparation for the professional work environment.”

Over time, Dianastasis said, the company intends to add people with obsessive-compulsive disorder, attention deficit and hyperactivity disorder, the visually impaired and disabled veterans to the mix.

The company also intends to open nine more operations centers at locations across the country by 2020. A new center opened in Nashville on Oct. 1, and three more will open next year, Dianastasis said.

“I just believe in it,” he said. “It is such a great model, and it does such a great thing for people. When you see the impact it makes not just on the person with the disability, but the caregivers, the families, the organizations that support these folks, everybody wins with this.”

Dianastasis, who received his bachelor’s degree in finance and marketing and his MBA at Lehigh, was inspired to start the company after meeting and working with Thorkil Sonne, a Danish businessman who launched Specialisterne (The Specialists) in 2003 with the purpose of employing high-functioning individuals on the autism spectrum for jobs in the tech industry.

“We started to understand what he was doing, and I was so intrigued by it, I decided to hire the program [at Computer Aid],” said Dianastasis, who was managing director in Wilmington, Delaware, for the company, which is headquartered in Allentown, Pennsylvania. “We had so much success with it, I said this is exactly what I want to do for the rest of my career. I want to start a new company that is 100 percent focused on doing this—not as a separate side project, but as the whole mission of the company—to employ people with disabilities.”

One of the secrets behind the success Specialisterne enjoys—and that has been adopted by The Precisionists—is its use of a popular toy to assess the skills of potential employees. Lego Mindstorms are kits that include the hardware and software necessary to build programmable robots that can perform certain tasks.

When The Precisionists assesses a new hire, the company asks them to complete a project with one of these robots, Dianastasis said.

“Our folks are trained to understand, based on the way these individuals work on this project … where they are in terms of their capability,” he said. “That’s a great way to understand their capability because a lot of these folks would never normally do well in a normal job interview.

“We do away with the traditional interview. We do other things to assess these people’s capabilities without worrying how firm they shake our hand or how directly they look you in the eye. That’s not important here in terms of performance or somebody’s ability to do a good job.”

Dianastasis said he is comfortable with the risk he is taking and the ambitious goals he has set for the company.

In fact, after working 30 years for the same company, he has found the new challenge invigorating.

“I grew up in an entrepreneurial family,” he said. “My dad had four different businesses. I’m very comfortable in risk situations.”

He also believes very strongly in his business model and that more and more companies are becoming receptive to hiring disabled people. Ultimately, he said he believes it may be a key to unlocking more economic growth in the United States.

“There are over 40 million people in the U.S. with a disability,” Dianastasis said. “When you think about the work that needs to be done, what a nice alternative to do the work here with an underserved labor force instead of shipping the work to India or somewhere overseas.

“Now companies are taking a fresh look and saying, ‘Wait a minute, we’ve got a great workforce right here in the U.S. that we could utilize if we gave them a chance.’” 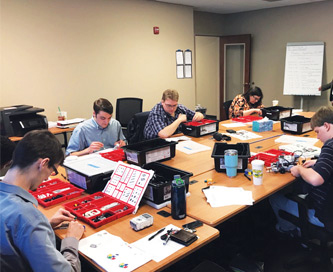 Trainees works with Lego Mindstorms during a four-week assessment/training to prepare them for their first assignments. Photo: Contributed