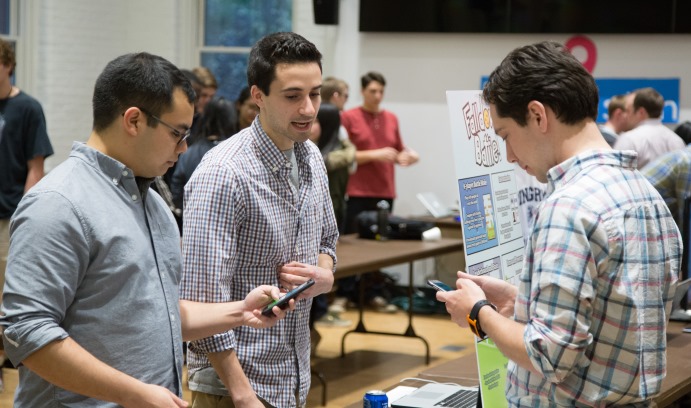 Alejandro Gonzalez ’16 (left) shows Pete Matt ’04 (right), a software engineer with Google, how to play the new FallDown Battle! app that he and Dan Kramer ’16 (center) invented for the first LUApps contest.

At the event on Nov. 13, eight teams showed how they used their skills in computer coding, marketing, graphic design, business operations and more to produce apps that can make life simpler or more fun.

“Every semester I would enter my own course schedule into my calendar,” said McDermott, a senior majoring in computer engineering. “I thought I should create something and write a script to automate it, so it would take a second to load.”

Spectator Maxwell Anselm ’10 ’11G, a data scientist with High 5 Games, said the Course Calendar app “was a very simple, practical thing, but it [utilizes] all these different sources, so I imagine it wasn’t trivial to put together.”

Contestants represented a range of majors, including finance, cognitive science, computer engineering, IDEAS (the Integrated Degree in Engineering, Arts and Sciences), and computer science and business (CSB). Michael Spear, assistant professor of computer science and engineering and adviser to the Programming Club, said the event helped students “show the campus community that computer science isn’t really just a major—it’s something that affects so many aspects of our lives.”

This event and a similar spring game programming competition called mobiLehigh are examples of computer science prowess at Lehigh—prowess that the university is building on with its Data X Initiative. Data X will support the hiring of 18 new Lehigh faculty members to strengthen computer and data science capabilities and to expand research and teaching capacities across campus, with an initial focus in marketing, journalism and bioengineering.

Recalling the first mobiLehigh contest held four years ago, Spear said the winning team consisted of “a programmer, a musician and an accountant.”

Going beyond the classroom

Judges from Google, Lutron Electronics and Bentley Systems roamed the science-fair style contest and met with each team to review their app developments. Each company awarded prizes, including ones for Crowd Favorite and Overall Winner.

“I saw a lot of talent,” said Mark Dane, a product designer with Bentley Systems. “I saw people who were doing backend programming and hooking things up on servers and processing things from web pages. I saw graphic design and visual design with the themed-looking apps that some groups had developed.”

Contestant Corey Kaplan ’18 said that in addition to being the android programmer for the Loccasion app, he learned a lot about project management. The app he and his team created produces an electronic all-inclusive Lehigh events schedule to view.

“One of the best things about LUApps was that it takes what you learned in the classroom and carries it one step beyond that,” said Kaplan. “It really showcases what you can do as a programmer and as a part of a team, while working together and dividing and conquering different aspects of tackling a very large project in a short period of time.”

“We see a lot of specific technology and web technology that are great for a lot of roles,” said Matt, “but really the ability for students to take a problem, break it down, and find existing tools they can use as building blocks is one of the key things that we do every day as engineers.”

Min stressed the importance of having campus events like app and game programming contests to encourage students to use and share technology. Another initiative the Programming Club is planning for campus is a “Hackathon,” which is becoming popular at other universities. In the event, participants have a limited amount of time to “hack” something together with a specific goal in mind.

“We try to hire the best talent, so we look for people who are very technically sound in the discipline of the software side of it,” said Spencer. “But we’re also looking for people with good communication skills, good soft skills, and good leadership potential.”

StockVise—uses historical data and trends to project if a stock on the U.S. Stock Exchange will increase or decrease in performance over time.—Andrew Dalzon ’19 and Charles Inwald ’19

More photos from the event can be viewed here. 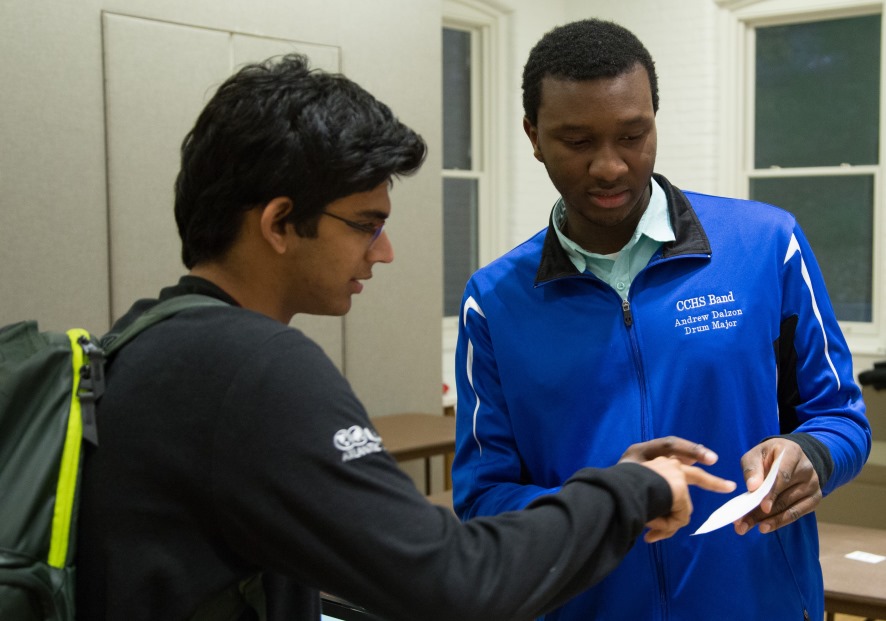 Andrew Dalzon ’19 (right), a CSB major, shows a visitor how StockVise, an app he and classmate Charles Inwald ’19 developed, uses historical data and trends to project the performance of a stock on the U.S. Stock Exchange. 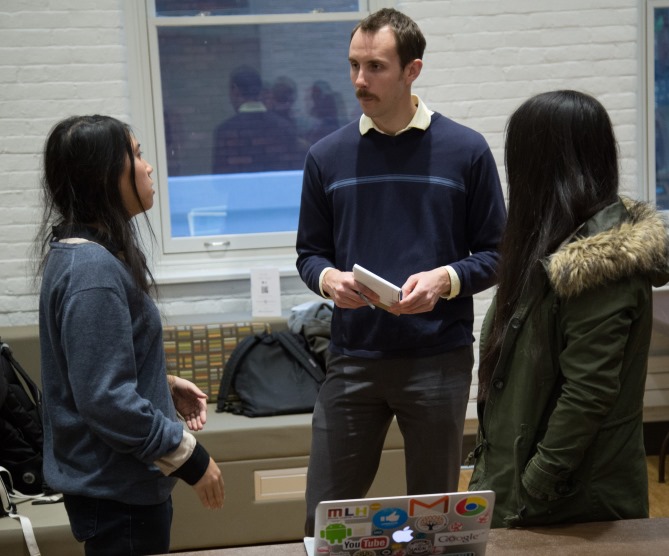 Karen Huang ’17 (left) explains BetaBlock, an app she created with Jiayu Lu ’18 (right), to Jim Heitzenrater, a human relations operations partner with Bentley Systems and a judge at the competition.