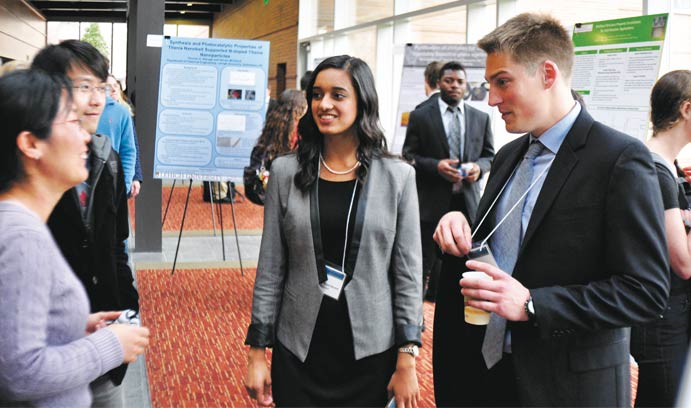 Five alumni have won a national competition for designing a portable device that enables patients with Human Immunodeficiency Virus (HIV) to determine if their medication is working.

Five alumni have won a national competition for designing a portable device that enables patients with Human Immunodeficiency Virus (HIV) to determine if their medication is working.

The Viral Diagnostic Technology device allows patients to monitor their HIV medication and determine if it is decreasing the amount of the HIV virus in the bloodstream. It is intended particularly for patients who live in remote areas without easy access to medical facilities.

The device provides results in under an hour, meeting the World Health Organization’s (WHO) minimum detection requirement. Its instrumentation and pre-test costs are expected to be lower than similar technologies now available.

The students designed the device for an Integrated Product Development class in which teams of engineering, business and design majors develop products and marketing plans. They were advised by Profs. Chao Zhou (electrical and computer engineering) and Susan Perry (chemical and biomolecular engineering).

Kundrod and Fraser, both bioengineering majors, continued working on the device with Prof. Xuanhong Cheng (materials science and engineering). They entered their project in the 2015 David and Lorraine Freed Undergraduate Research Symposium in the P.C. Rossin College of Engineering and Applied Science, winning the People’s Choice Award and second place overall.

Last summer, Kundrod worked on the technology at LaunchBayC, a program sponsored by Lehigh’s Baker Institute for Entrepreneurship, Creativity and Innovation.

Most of the estimated 35 million people worldwide with HIV, the students said, live in low- and middle-income countries. WHO recommends patients taking antiretroviral therapy undergo an annual viral load test to measure the concentration of HIV virus in the blood and determine if medication is decreasing it.

“To address the global pandemic of HIV, [there is an urgent need for] tests that are designed for use at the point of care, that can be run with a portable setup, that have a turn-around time of less than an hour, and that require minimal training.”

The Viral Diagnostic Technology utilizes microfluidics (the manipulation of extremely small amounts of fluid) to capture and quantify HIV virions (the complete and extracellular infective form of a virus particle).

Cheng has developed a porous membrane that isolates 80 percent of the HIV virions from solution in a microfluidic device. The DEBUT students worked with Krissada Surawathanawises, a Ph.D. candidate in Cheng’s group.