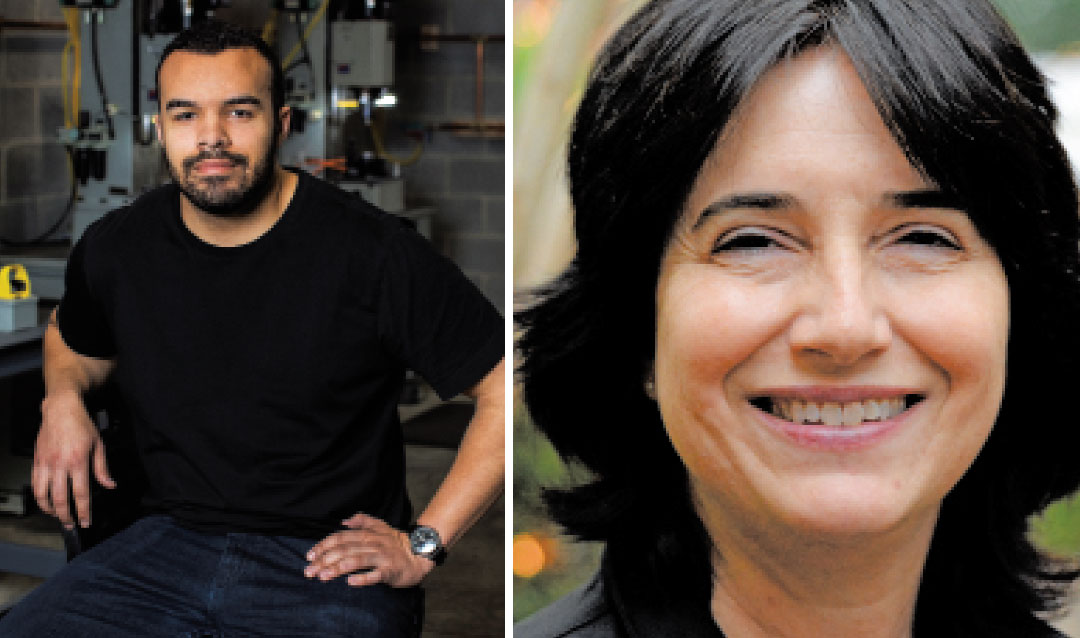 When avid cyclist Karen Shihadeh Schaufeld ’83 ’15P ’17P acquired a beautiful, hand-crafted bicycle several years ago, she searched her options for a bike lock that wouldn’t weigh more than the bike itself—and one that thieves couldn’t easily cut through with shears.

“I thought, ‘Well, surely somebody must have something on the market to address this,’ and nobody did,” said Schaufeld. “So that’s why I ended up going to Lehigh.” Schaufeld presented a challenge to students enrolled in Lehigh’s Integrated Product Development (IPD) program (now Technical Entrepreneurship): Create a bike lock that’s lightweight but secure enough to thwart would-be thieves.

She brought props, which included her son’s lightweight bicycle, plus heavy chain locks and bolt cutters. Then, she invited the IPD students to try to cut through the chains, which, of course, they easily could.

Schaufeld, who graduated from Lehigh with a double major in English and government and went on to obtain a law degree, worked with two IPD teams on her idea for a lighter, stronger lock. Innovator and engineer Dylan Cato ’16, who, at the time, was pursuing a degree in mechanical engineering at Lehigh, led one of those IPD teams in developing a prototype that kept to Schaufeld’s concept.

The two went on to cofound Altor Locks, a company that creates innovative bicycle security products. The company’s first patented lock was the titanium folding lock Altor 560G, which weighed only 560 grams and caught the attention of Outside magazine. The patented Altor APEX Ti followed, which, based on consumer feedback, included additional innovative safety features. The locks are assembled in Sterling, Va.

“I wanted to come out with a product that could solve my issue, which was something that was light and strong,” said Schaufeld, the company’s chief executive officer. “But early on, even when we were working on the lightest, strongest lock, there was still that [thought], ‘what if we could do something that can’t be cut.’”

Now Schaufeld and Cato are introducing a new product, a hefty and patent-pending Altor SAF Lock, which is designed to protect against thieves equipped with an increasingly popular handheld tool, a cordless angle grinder. “What happened is, an angle grinder just got cheap,” Schaufeld said, “and it became the tool of choice for a lot of thieves.” 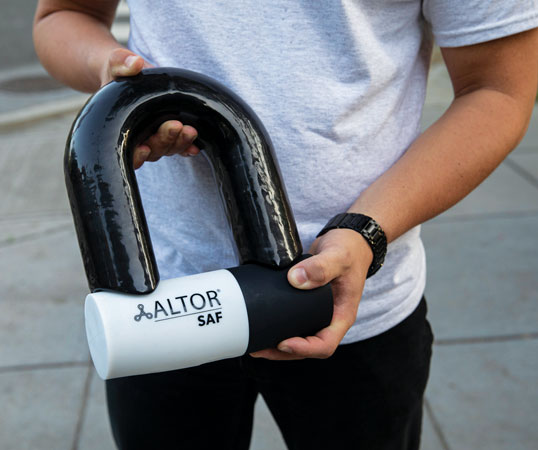 The new lock, which weighs about 13.5 pounds, is not meant to be portable. Instead, it is intended for use by those who have to leave their bikes unattended for long periods of time, either overnight or during work hours.

“Bike thefts are so underreported,” said Cato. “I’ve met multiple people who’ve been victims of bike theft, and they don’t bother calling the cops because they know there’s such a slim chance of getting their bike back.”

According to Project 529, which created a worldwide bike registry, more than two million bikes are stolen each year in the United States and Canada. However, only 20 percent of those thefts are ever reported to police. More than half of the stolen bikes were secured with only a cable lock, the statistics showed.

Before designing the new lock, Cato had scouted around and found online videos of thieves riding off with bicycles—mere seconds after taking an angle grinder to the bike locks. “So that, of course, reignited our flame,” said Schaufeld. “[We] said, ‘Yeah, wouldn’t it be cool if we could do something that no one’s ever done before?’”

Cato said he came to realize that much of the industry was focusing on the more traditional tools being used to cut bike locks, not on angle grinders, which are more efficient at cutting hard materials like steel. “A lot of lock companies were ignoring this problem because they really had no answer for it,” he said.

“One thing I knew from various experiences with welding and machining is that these angle grinders were not very good at cutting soft material,” he said, “and in fact, you could actually damage the tools that way, and the manufacturers would tell you not to do that.”

Altor Locks started to explore how to combine soft and hard materials to develop its new lock, along with a geometric design to increase the difficulty of accessing the lock’s steel shackle.

Product testers, using the most popular angle grinders on the market, ground through multiple batteries and blade discs and took well over an hour to get most of the way through the new lock, according to a product press release. By comparison, the release said, the strongest locks on today’s market can be cut in less than a minute. A test editor at Bicycling took the formidable challenge, posting an online video that showed his struggle to break the new lock.

As Altor Locks increases its product offerings, Schaufeld credited Lehigh’s IPD (Technical Entrepreneurship) program with helping to facilitate what she wanted to do. The program engages students from differing majors, she said, and gives them hands-on and practical experiences. Also for entrepreneurs, she said, participation in the program can help shorten the often years-long process for inventing products and creating prototypes.

“It really creates more innovative thinking around how a product can be made,” she said.

“There’s very few people in the world who get to design a product, get it sourced and manufactured and sell it, and also are able to innovate,” she said. “It’s just a really, really cool set of skills.”