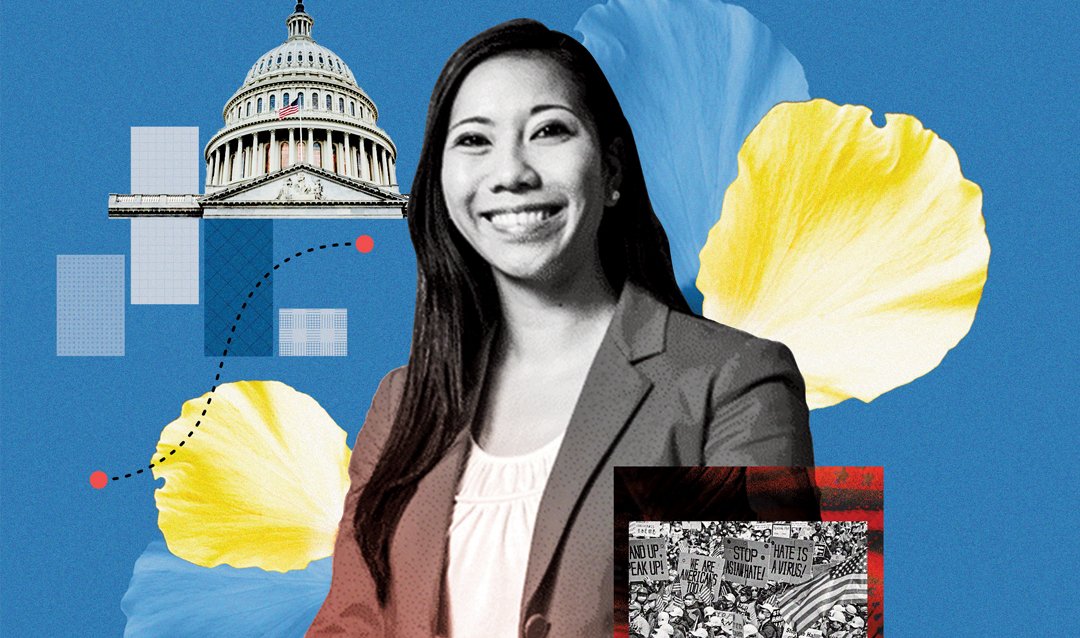 Krystal Ka‘ai ’10 a political science major with a minor in business, was appointed by President Joe Biden in 2021 to lead the White House Initiative on Asian Americans, Native Hawaiians and Pacific Islanders. Illustration: Neha Kavan.

It was 2006 when Krystal Ka‘ai ’10 left Hawaii, where she was born and raised, to study at Lehigh, an experience that would eventually lead her to Washington, D.C. and help fulfill her dream of working for the federal government.

“It has been a whirlwind, and it’s been a lot of fun and a lot of work,” Ka‘ai said during a virtual presentation to the Lehigh Asian Alumni Network.

“I think now more than ever this work is so critical, as the Asian American, Native Hawaiian and Pacific Islander community faces a multitude of challenges that have been exacerbated over the past two years of the COVID-19 pandemic,” she said. “Most concerning is the rise in anti-Asian hate crimes.”

The initiative, reinstated last year by Biden’s administration, is charged with coordinating a comprehensive federal response to the rise in anti-Asian bias and violence, as well as addressing the systemic lack of disaggregated data on the communities, expanding language assistance programs, and addressing obstacles to education.

Before taking the role, Ka‘ai was executive director of the Congressional Asian Pacific American Caucus, leading legislative, communications and outreach strategy for a bicameral caucus of more than 70 members of the U.S. House of Representatives and the U.S. Senate. She worked to advance key priorities of the Asian American, Native Hawaiian and Pacific Islander communities, including healthcare, immigration and education.

Ka‘ai said the journey from high school to her career was unique. Most kids from Hawaii who go to college on the continental U.S. head to the West Coast, Ka‘ai said, but she knew she wanted to get out of her comfort zone and experience something different, so she headed to the East Coast—and Lehigh—to study political science and follow a career path in public service.

“For me, as someone from Hawaii, but also of Asian American and Native Hawaiian descent, I really wanted to make sure my community had a voice at the national level where so many decisions are made,” Ka‘ai said.

Coming to Lehigh was a culture shock.

“When I was accepted to Lehigh, I want to say we had five or six of us from Hawaii that year, but the student body was still predominantly white, so that was a big adjustment for me having grown up in one of the most diverse and multicultural states in the country,” she said.

Still, Ka‘ai built relationships and experiences at Lehigh, which she credits with helping to advance her career.

Jeffrey D. Lau ’70, longtime president of the Lehigh University Alumni Club of Hawaii and senior director at the Ogawa, Lau, Nakamura & Jew law firm in Honolulu, facilitated Ka‘ai’s virtual presentation in March to the Lehigh community. Lau encouraged Ka‘ai and several of her high school classmates on the Kamehameha Schools Debate Team to apply to Lehigh. He said he hoped to bring more ethnic diversity to Lehigh and expose Native Hawaiian students to other parts of the country.

In 2009, while still at Lehigh, Ka‘ai interned with the state of Hawaii’s Office of Hawaiian Affairs at its Washington, D.C. bureau. After graduating the following year, she was hired as a policy fellow. In the summer of 2011 she accepted an internship with Hawaii’s then-Sen. Daniel K. Akaka, a U.S. senator from 1990 to 2013. Akaka, now deceased, was chairman of the U.S. Senate Committee on Indian Affairs, which has jurisdiction over Native Hawaiian issues.

Later in 2011 she was hired for an entry-level position with the Congressional Asian Pacific American Caucus. About two years in, when she was 25, Ka‘ai was promoted to the organization’s executive director position.

“Even though there are a lot of young people working on Capitol Hill, I was often the youngest person in the room when I first assumed my role as executive director of the caucus,” she said.

The experience was thrilling for Ka‘ai, who said she was invited to meetings at the White House and involved in discussions with Congressional leadership. In 2020, the role opened up with the Biden/Harris administration to lead the White House Initiative.

“It was a really competitive process to be able to get this appointment, as there are only about 4,000 political appointments offered every administration, and they received hundreds of thousands of resumes,” she said.

The initiative was first established in 1999 by then-President Bill Clinton to improve the lives of Asian Americans and Pacific Islanders. Succeeding presidents issued similar executive orders to re-establish the initiative and update its priorities. Biden’s initiative is the first to explicitly recognize Native Hawaiians and the first to be led by someone of Native Hawaiian descent.

One issue Ka‘ai is passionate about in her new role is addressing anti-Asian hate crimes.

In the past year, anti-Asian hate crimes have increased more than 330% across the country, Ka‘ai said. She recalled the Atlanta spa shootings on March 16, 2021, in which eight people, including six Asian women, were fatally shot at three separate Asian-run businesses.

“It’s been extremely triggering and traumatizing for the Asian American community,” she said. “It’s a big priority that the Biden administration is working to address, knowing that we need to prioritize the safety of all Americans, including the Asian American, Native Hawaiian and Pacific Islander communities.”

Ka‘ai said the administration also plans to look at broader systemic inequities that have long plagued the Asian American population. For example, more than 70% of Asian American adults are immigrants, many of whom speak limited English and require translations and language assistance when accessing federal resources, she said.

The population is also the fastest-growing ethnic group in the U.S. with more than 24 million Asians and 1.6 million Native Hawaiians and Pacific Islanders living in the U.S., according to the U.S. Census Bureau. Many Asian Americans, Native Hawaiians and Pacific Islanders trace their roots to specific countries or populations from Asia or the Pacific region, yet a lot of federal data lumps all those groups together, Ka‘ai said.

For this reason, “we are often not seeing the disparities that exist between specific subpopulations in this group, which has been extremely problematic throughout the pandemic,” she said.

Ka‘ai encourages students to make the most of their time at Lehigh because they never know where it might take them. “I always encourage students to reach for the stars and make sure that you can put yourself on the right career path, make sure you have a plan to get there, but you shouldn’t see age as a barrier.”

Ka‘ai has fond memories of Lehigh. “I truly believe that I would not be here today had it not been for my experience at Lehigh University and taking that first leap, leaving my island home and getting out of my comfort zone to get to where I am today.”