A singular research success and a first for Lehigh 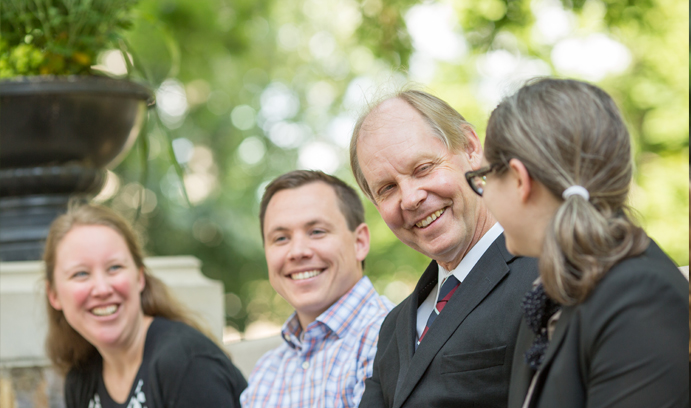 Martin Harmer (second from right), professor of materials science and engineering, will use the Keck award to study the anti-thermal behavior of materials. Pictured with Harmer, who is also a senior research adviser in the engineering college, are (l-r) assistant professors Tara Troy (civil and environmental engineering), Brandon Krick and Natasha Vermaak (both mechanical engineering and mechanics).

The W.M. Keck Foundation has awarded a $1 million grant to Lehigh to study and discover the mechanisms that govern anti-thermal processes that appear to reverse nature.

The work has the potential to revolutionize scientists’ basic understanding of thermal processes and inform the development of new materials that can withstand higher temperatures. A breakthrough in this area could lead to significant increases in engine efficiency, for example, saving billions of dollars in fuel costs.

Known for funding science and engineering projects with the potential to pioneer new territory in a field, the Keck Foundation has awarded the grant to the project’s principal investigator, Martin Harmer, Alcoa Foundation Professor of Materials Science and Engineering and Senior Faculty Adviser for Engineering Research Initiatives.

Harmer’s collaborators on the project, which is titled Anti-thermal Behavior of Materials: Reversing the Trend of Nature, are Elizabeth Holm and Gregory S. Rohrer, both professors of materials science and engineering at Carnegie Mellon University.

Lehigh President John D. Simon said the grant “affirms the groundbreaking work and collaboration being done by our world-class faculty. This is very exciting news, and I thank the Keck Foundation for its continued support of pioneering research and discovery.

“Congratulations to Prof. Harmer and his colleagues as they embark on this fascinating research challenge.”

Reversing the trend of nature

Harmer, Holm and Rohrer will seek to understand why some atoms behave in a manner contrary to nature, a phenomenon about which little is known.

The atoms in solids typically move exponentially faster with increasing temperature, obeying a classical law of physics. This motion fundamentally limits the properties and performance of materials. For example, turbine engine components start to weaken at higher temperatures limiting the maximum operating temperature and efficiency of the engine.

One of the major challenges in condensed matter science is to learn to combat this trend of nature in order to produce materials that are more efficient, resilient and enduring.

Researchers at Lehigh, Carnegie Mellon and the Karlsruhe Institute of Technology have recently identified examples of several anti-thermal processes which actually become slower, or do not change at all, as temperature increases. Anti-thermal behavior has been detected in isolated cases in metals, ceramics, semiconductors, polymers and biomaterials. The researchers described their efforts last July in an article in Scripta Materiala, an Elsevier publication.

In experimental and atomistic simulation studies of nanograin metals, grains—microscopic crystals that form the metal—were found to grow exponentially faster than expected at room temperature. In another experimental study—which included investigators at Lehigh, Karlsruhe and Aveiro University—the grains in a ceramic grew more slowly at higher temperatures—the very opposite of expected behavior.

The researchers’ goal is to study and discover the unknown atomic mechanisms that govern this intriguing behavior. They will then use this understanding to design new materials with enhanced thermal performance that have the ability, for example, to increase the operating temperature and efficiency of engines, or the service life of bulk nanograin solids.

“I’m extremely grateful to the W.M. Keck Foundation for their vision in supporting and enabling high risk research, such as this,” said Harmer. “This project will allow us to explore uncharted territory that could potentially uncover the secrets of nature’s counterintuitive thermal behavior and pioneer new approaches to materials science.

“My graduate student, Chris Marvel, refers to anti-thermal behavior as the ’Benjamin Button phenomenon of materials science,’ where nature reverses its course—I like his analogy!”

Harmer described the concept of grain boundary complexions in an article in Science magazine in 2011.

With Keck funding, Harmer and his colleagues will apply a novel method for measuring grain boundary motion inside multigrain materials. The team will seek to understand the process by applying methods of atomistic computer simulation and utilizing Lehigh’s atomic-resolution electron microscopy instruments to directly image the atom movements associated with anti-thermal behavior. An imaging stage will be utilized to make in-situ observations of atom movements at operating temperatures.

“This innovative and bold project holds great potential to completely transform the way that we approach the development of materials for high-end thermally challenging applications,” said John Coulter, interim dean of Lehigh University’s P.C. Rossin College of Engineering and Applied Science. “We are very appreciative of the support of the Keck Foundation, and proud of the Lehigh-Carnegie Mellon team that won this honor.”

Another core strength of the project is the team’s long history of productive and synergistic collaboration. To integrate all research into a cohesive hypothesis-driven theoretical and experimental endeavor, Harmer will apply his expertise in grain boundary complexions and atomic resolution electron microscopy; Holm her expertise in computational simulation of atom movements in grain boundaries; and Rohrer his knowledge of 3D microstructural networks to measure grain boundary mobility.

Last August, Harmer was named a Distinguished Life Member of the American Ceramic Society (ACerS), the highest honor accorded members of this scientific and technical organization and its most prestigious level of membership. The honor recognizes a member’s contribution to the ceramics profession.

As former director for more than two decades of Lehigh’s Center for Advanced Materials and Nanotechnology, Harmer helped develop it into one of the most highly respected materials research centers in the U.S. His research has focused on advancing the fundamental understanding of microstructure control, sintering, grain growth and transport behavior of ceramics and metals, for tailoring material properties and performance.

Harmer also serves as senior faculty adviser for research initiatives in the P.C. Rossin College of Engineering and Applied Science.

The Los Angeles-based W. M. Keck Foundation, which was established in 1954 by the late W.M. Keck, founder of Superior Oil Co., supports pioneering discoveries in science and engineering, medical research and undergraduate education.

“The Keck Foundation proposal process is extremely competitive,” said Patrick V. Farrell, provost and vice president for academic affairs at Lehigh, “as the research it funds must be both very innovative and potentially very high impact.

“This award represents an outstanding opportunity for this team to explore what might seem like a material anomaly in order to understand the underlying mechanism and perhaps extend existing examples to new materials and new applications. I look forward to seeing their results and what impact those results might have in practical applications.” 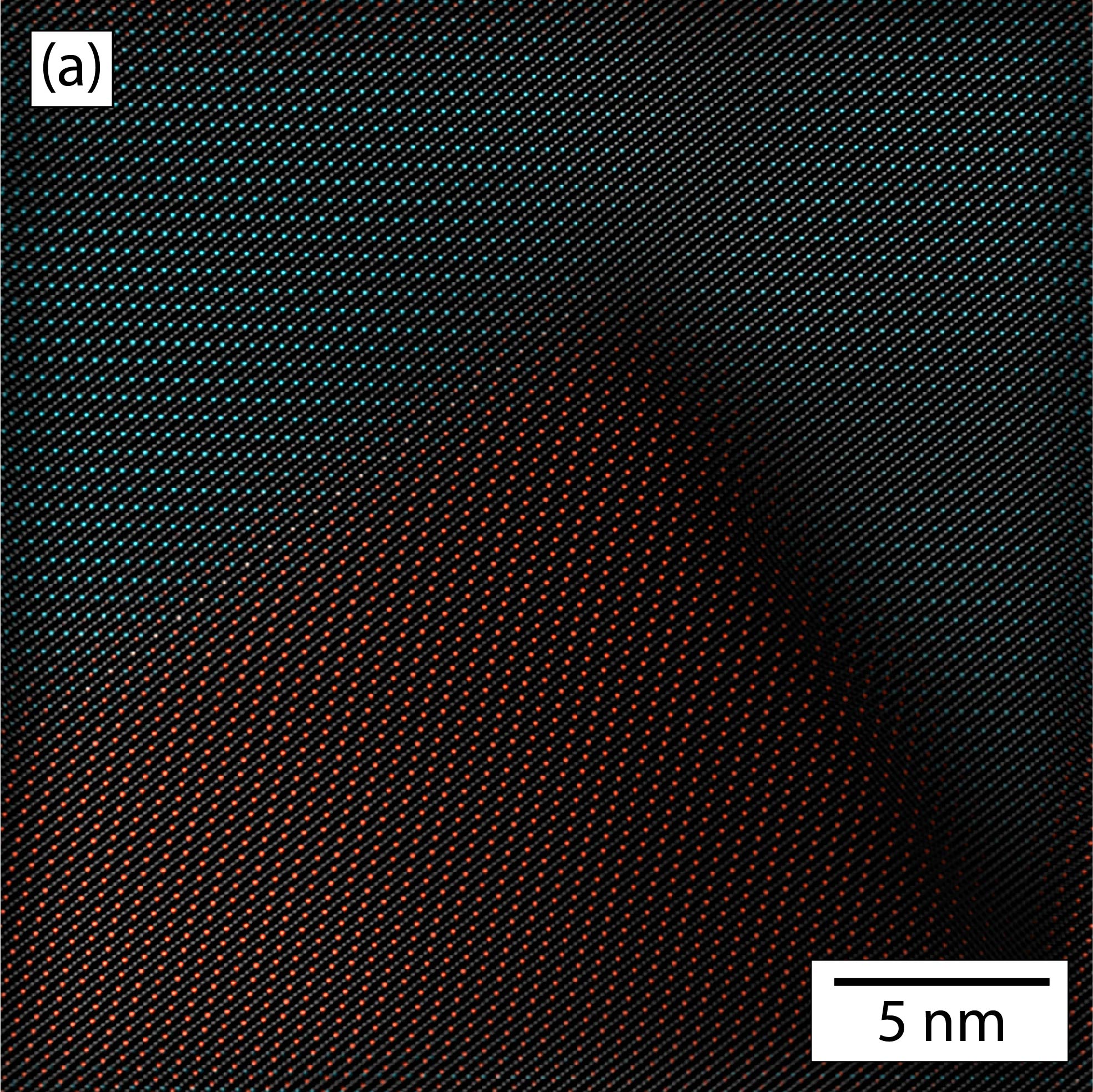 A filtered atomic resolution High-Angle Annular Dark Field (HAADF) image shows a twin (a grain with a mirroring symmetry of atomic lattices on each side of its boundary) in a nanocrystalline nickel-tungsten alloy. The nickel atoms are grey and the tungsten atoms are colored blue and orange to highlight the location of the twin. 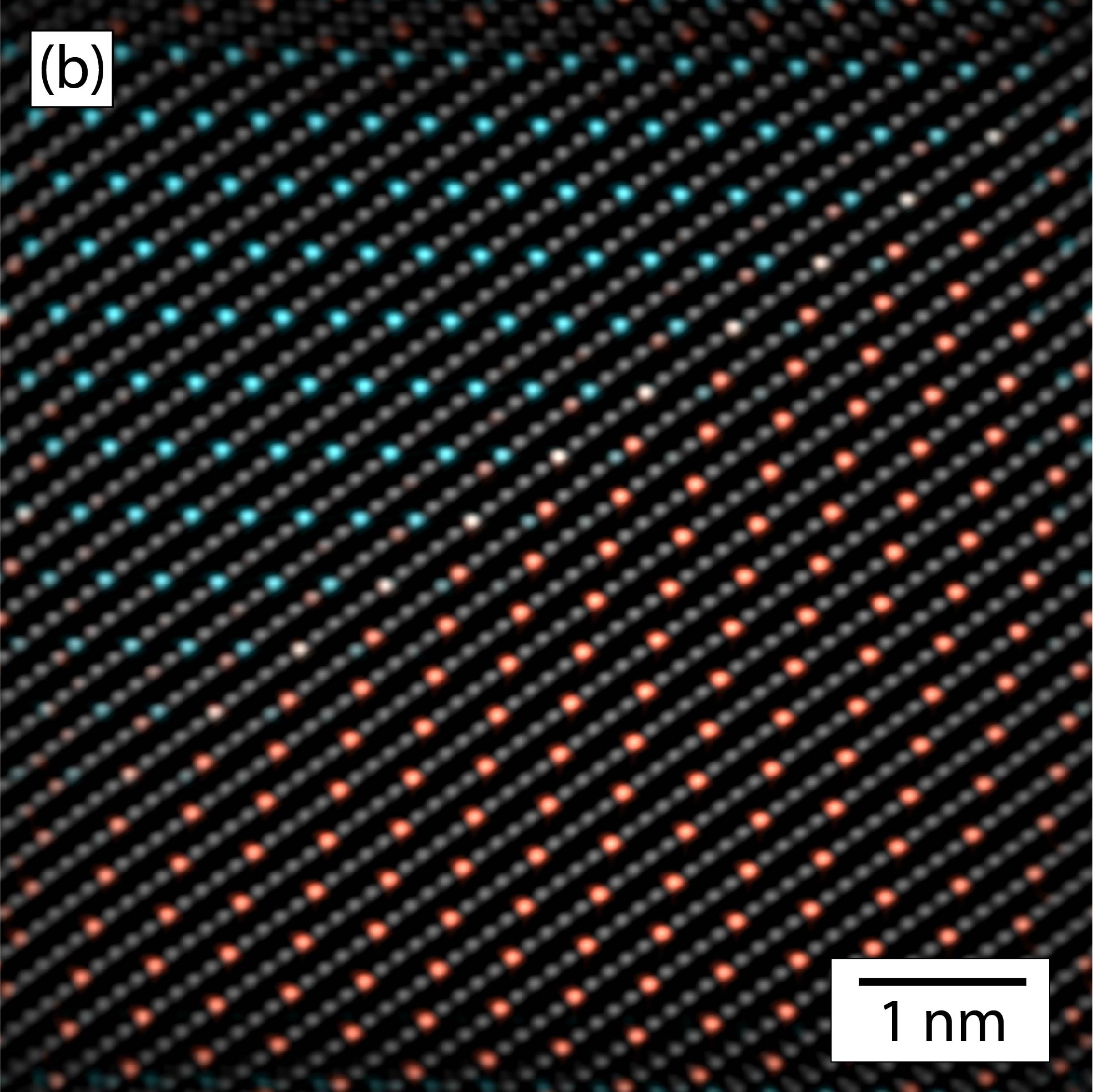 A higher magnification of the image shows more clearly how the atoms are arranged on both sides of the twin boundary, which is represented with a line of yellow atoms in the center of the image.