Hurricane Sandy felled many of Lehigh's beloved centuries-old trees. Now they're being shaped into something lasting.

The day after Hurricane Sandy hit in October 2012, Brian Slocum ‘97 drove through campus to view the damage firsthand. He arrived to find that dozens of giant oak trees that had stood as stalwart guardians of the university since the days before Lehigh was Lehigh had been blown to the ground.

“At that point, I think I had already seen the nostalgic value in the trees and knew that something could, and should, be done with them,” says Slocum, managing director of the Wilbur Powerhouse and Design Labs.

By the end of the day, Slocum had assembled a team that rescued six 12-foot pieces of trees.
He stored the nearly 300-year-old pieces knowing that someday there would be a use for them.

In 2015, the perfect opportunity presented itself – the construction of conference tables for Williams Hall, which is set to re-open in October after a comprehensive renovation. Slocum, with wood shop Manager Michael Moore and undergraduate students Deanna Shepherd and John Obiedzinski, spent the summer building the tables, giving the historic wood a second life.

Shepherd, who helped chip off bark from the rough wood, sand the table tops and cut the pieces for the steel base in the metal shop, says she learned so much about different woodworking processes.

“It was really cool to hear about how these trees fell down on campus and all of the steps they used to get it from the front lawn to eventually a room in Williams Hall,” she says.

Slocum grew up on a Christmas tree farm in northeast Pennsylvania. “From a tree farmer’s perspective,” he says, “there is a reverence for old wood.”

“When you plant a seedling and watch it grow so slowly, and see the obstacles it faces along the way, you can't help but respect the power of nature and the immense scale of time that it takes to grow something so tall,” he explains.

It can take between eight and 12 years to grow a Christmas tree from a seedling to a seven-foot harvestable tree, he explains.

“Your mind reels at the thought of a 50-foot-tree, especially something as slow growing as oak,” Slocum says. “These trees that we are turning into tables were not only present at the founding of Lehigh 150 years ago, but also at the signing of the Declaration of Independence.”

“I don't want the part these trees have played at Lehigh to end with a gust of wind,” he says. “These conference tables, and some of the other things we hope to build from the lumber, represent the opportunity for these trees to continue to be woven into Lehigh's history in the next century.”

In addition to managing the Wilbur Powerhouse Prototyping Lab and the Chandler-Ullmann Wood Shop, Slocum teaches courses in metalworking as well as prototyping and serves as an advisor to IPD (Integrated Product Development) teams.

In addition to his work at the university, he most recently co-founded Isosceles Design Studio, LLC., a design firm specializing in custom furniture and architectural and interior design. 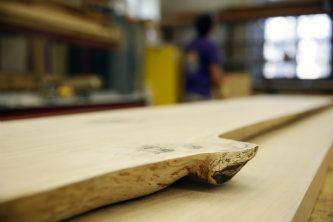 The 300-year-old wood is being used to build conference tables for Williams Hall. 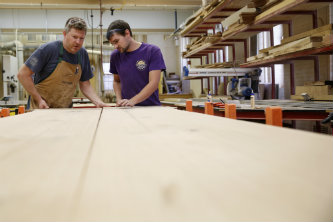 Brian Slocum, left, and wood shop Manager Michael Moore work on a conference tabled made from Lehigh's felled trees. Slocum didn't want a gust of wind to end the trees' significance to Lehigh. 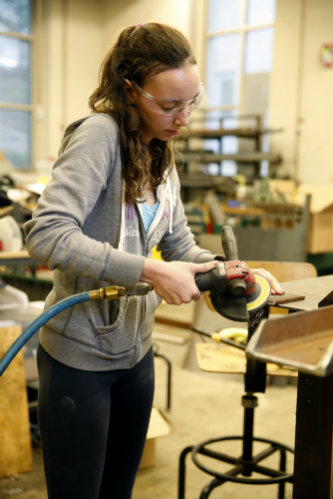 Mechanical engineering student Deanna Shepherd helped chip off bark from the rough wood, sand the table tops and cut the pieces for the steel base. 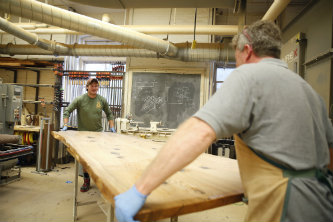