A psychological perspective on police violence 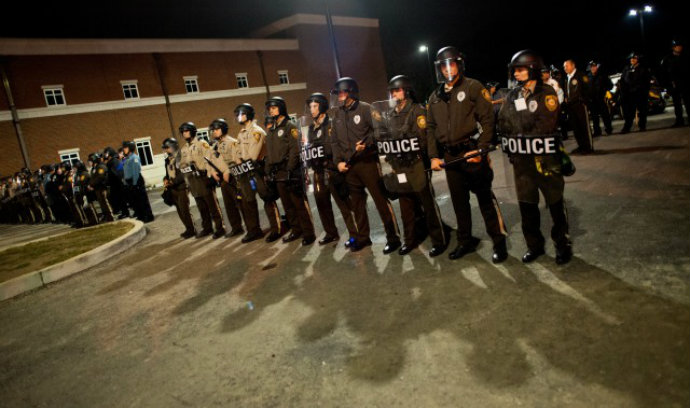 Law enforcement officers stand guard during a protest at the Ferguson Police Department in Ferguson, Mo.

A Staten Island grand jury's decision not to indict police officer Daniel Pantaleo in the chokehold death of Eric Garner came in the wake of the Nov. 24 news that Ferguson, Missouri, police officer Darren Wilson would walk free after killing 18-year-old Michael Brown.

The debate over the grand jury decisions has been widespread. Protests, “die-ins,” and vigils have been held everywhere from college campuses to athletic venues and major city landmarks. Students, politicians, police officers and demonstrators nationwide hold different views about racism and law enforcement.

A recent report on NPR indicated that part of the problem with police violence against citizens is born of officers’ fears.

Gordon B. Moskowitz, chair of the psychology department at Lehigh University, suggests that it is naive to call these events racialized decisions in the manner most people think about race (overt hatred and dislike for blacks by white officers). However, it is equally naive to say Americans live in a post-racial society where such actions are not influenced by race.

Moskowitz, a social psychologist whose research interests examine thought processes that occur effortlessly and unconsciously, was asked to provide his thoughts on how racial bias may play a part in police violence, and not necessarily an overt one. He suggests that the image of racism conjured is often very different from the way it is actually manifested in everyday life.  “The actual impact of racism on our decisions can be very subtle, often not something easily recognized by the people who are being influenced,” says Moskowitz.

The most recent cases are most likely born of implicit bias – thoughts and feelings triggered extremely quickly for the purpose of guiding fast reactions, he says. Similar to people pulling their hand from a hot stove, individuals develop fast, reflexive responses to other people and situations that help prepare appropriate behavior. When stereotypes are triggered, the consequences can be inappropriate and undesired responses that might not be endorsed if the people involved were aware they were doing it.

Dr. Moskowitz offers three distinct psychological processes that illustrate how fear might lead one to act with discrimination without realizing one's reaction is biased or inappropriate:

1) We evaluate everything we see and everyone we meet within 200 milliseconds to determine if something is threatening or not. Our psychological system is built and shaped through experience for the purpose of quickly evaluating everything we encounter to feed back to the decision process information about whether it is to be approached or to be avoided. In the split second one would have to decide whether one should shoot or hold fire, these fast evaluations below the radar feed to consciousness a sense of "threat."

2) The process just described is one of evaluation and feelings. A completely separate process is that of implicit stereotyping. Consider the word "shark" -- simply by reading that item you have within a half second not merely conjured up an image of the shark, but also retrieved from memory all the knowledge you have about the creature without realizing it or "wanting to." This happens with stereotypes of human groups -- when a white person sees an African American man it triggers an image of this group that he or she has learned. This happens without one realizing it and without one even needing to believe this image is correct. Here lies the danger for policing: our culture stereotypes black men with qualities that unknowingly trigger the concept of threat (criminality, danger, violence, super athleticism and strength). Because one is now prepared (or primed) to see threat, perception follows suit. The wallet in their hand will be seen as a gun, the person moving toward your vehicle will be seen as an attacker. This does not require you being racist in the way we commonly discuss the term. It merely requires you having to quickly decide what this person is likely to do so you can prepare your own response accordingly.

3) Lehigh University was privileged to recently have a scholar named Phil Goff come and speak about his work with police officers. He discussed a very non-intuitive finding relating to white police officers and black suspects. He argued that more important than what we traditionally think of as an effect of racism is the co-dependence of stereotypes with masculinity threat. He reported that violence toward black suspects is not predicted by racist beliefs (either explicit or unconsciously held), but by first considering whether the officer was insecure about his masculinity.