A New President, A New Lehigh 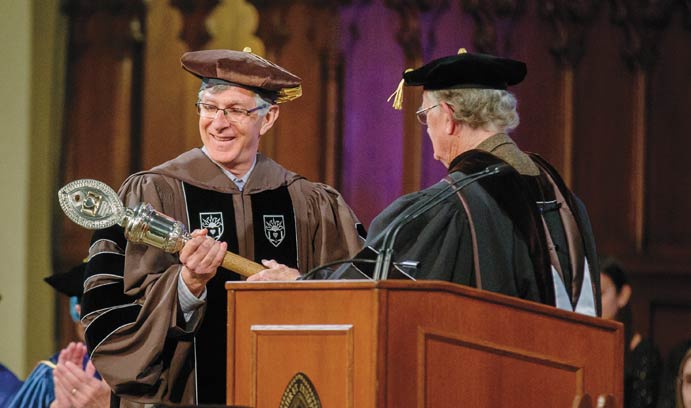 At a historic Founder’s Day celebration in October, John D. Simon was installed as Lehigh’s 14th president, an ambitious $250 million initiative was announced, and the university kicked off its 150th birthday celebration with a block party, concerts, lectures, a discovery showcase and a host of other events.

Simon’s installation by Brad E. Scheler ’74 ’05P ’08P ’09PG, chair of the Lehigh Board of Trustees, took place in front of a packed crowd in Packer Memorial Church and, thanks to a live feed, an overflow crowd of 350 students, faculty and friends in Grace Hall.

After officially accepting the mantle of his new office, Simon spoke eloquently of the power of higher education to shape the future. He said Lehigh had experienced a number of “pivot points” in its 150-year history and now stood at another critical juncture. Advancing an ambitious agenda, he announced the Board’s commitment to the $250 million investment in institutional resources in the areas of teaching, learning, research and student life. The investment will support a comprehensive plan that will allow Lehigh to leverage its strengths and build a university to serve future needs.

“We need to be bold, take risks, push and define frontiers of knowledge, create and embrace new forms of pedagogy for engaging our students in learning and research,” Simon said. “We must modernize our infrastructure and research facilities so they do not hold back the creativity and innovation of our faculty and students. We need to reinvigorate our fields of study by integrating experiential and technology-enabled methods into the student experience.”

The Founder’s Day celebration opened with the Lehigh University Choir performing “Darest Thou Now, O Soul,” a composition commissioned by Lehigh to commemorate its Sesquicentennial and Simon’s installation. The composition, a Mountaintop project, was created and conducted by Steven Sametz, the Ronald J. Ulrich Professor of Music and director of Lehigh University Choral Arts. A sculpture of lights suspended from the church ceiling served as a visual and interactive focal point.

Also among the Sesquicentennial events was the renaming of Campus Square as Farrington Square—a tribute to Gregory Farrington, Lehigh’s 12th president, and his wife, Jean. The Farringtons inspired the square that is considered the gateway to South Side Bethlehem.

Concerts, a homecoming tailgating outside Goodman Stadium and VocalPalooza, a student talent show, rounded out the weekend. Several buildings and facilities were dedicated, including historic Williams Hall that, thanks to the generosity of donors including Herb Roemmele ’53 and Sharon and James Maida ’85 ’17P '19P, has been transformed into a global hub and student center.

With Lehigh’s athletics campus continuing to evolve, officials gathered to formally dedicate three renovated facilities—the expanded Cundey Varsity House, the new home of Lehigh’s hugely successful softball program and the completely rebuilt Ulrich Varsity Tennis Courts. All three projects were supported by former Lehigh trustees chairman Ronald J. Ulrich ’67, who served in that role from 1996-2002 and over the years has supported a variety of key strategic initiatives at the university.

A special community breakfast also was held under the cover of the Tamerler Courtyard Outdoor Concert Pavilion, built especially for the Sesquicentennial weekend.

The breakfast offered an opportunity for Lehigh officials to celebrate and recognize the accomplishments and significant anniversaries of its community partners, as well as the university’s combined efforts to foster a vibrant South Bethlehem.—Lehigh staff 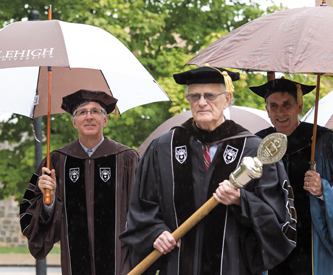 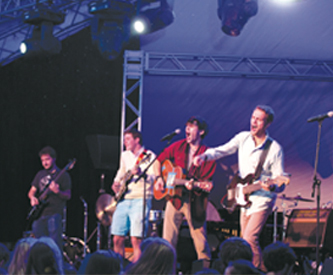 Lehigh students took to an outdoor concert pavilion to showcase their musical talents at VocalPalooza. 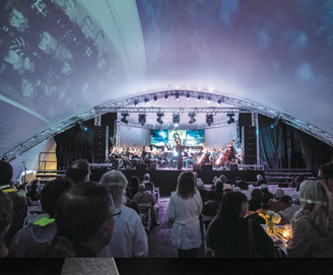 The Brown and White campus party featured performances by the Department of Music, a light show and a birthday toast.

Goals of the $250 Million Initiative

Ensure that Lehigh's financial and merit packages attract the best students to the university, regardless of their financial situation.

Deepen the university's commitment to the hallmarks of a lehigh education, one that stress innovation, integration and entrepreneurship at all levels.

Globalize Lehigh's campus to ensure the university's graduates are educated about the world, acquiring the knowledge, skills and experiences to prepare them to lead in tackling the complex global issues of their generation.