A musical bridge to Shenzhen 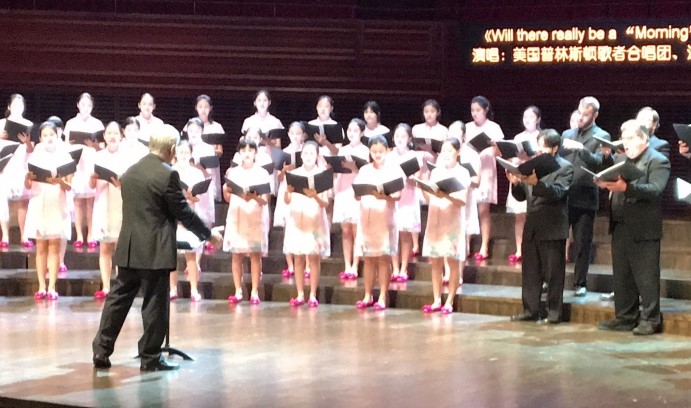 Steven Sametz conducts the Shenzhen Lily Children’s Choir and The Princeton Singers in a performance at the Shenzhen Concert Hall in China. The concert culminated the Fourth Shenzhen International Choral Festival. (Photo courtesy of Steven Sametz)

Steven Sametz has won countless honors in nearly four decades as director of Lehigh Choral Arts. His compositions have been performed at music festivals in Austria and Germany and across the United States, and his commissions have come from the National Endowment for the Arts, the American Choral Directors Association and leading choirs like Chanticleer and the Dale Warland Singers.

In setting and orchestrating his compositions, Sametz has proven to be a tireless innovator, choosing texts from Walt Whitman, Emily Dickinson, St. John of the Cross and a global smorgasbord of legends and folk tales, and scoring his works for Burmese gongs and Indian tampuras, double orchestras and multiple choirs, hammer dulcimer and vibraphone.

None of this prepared Sametz for the reception he received recently during a whirlwind visit to Shenzhen, a fast-growing city of more than 30 million in southern China, where he and The Princeton Singers headlined the Fourth Shenzhen International Choral Festival.

Sametz has served since 1998 as artistic director of The Princeton Singers, a 17-voice professional chamber choir that has premiered over 200 new works. His invitation to Shenzhen came about through a connection he made with a Chinese musician whom he met at a conference of the American Choral Directors Association. The ACDA is promoting exchanges between American and Chinese choirs and choral composers; Sametz has chaired ACDA’s Composition Advisory Committee since 2012.

Sametz, the Ronald J. Ulrich Professor of Music at Lehigh, and The Princeton Singers spent just three days in Shenzhen. “I feel like a time traveler,” he said one week after returning. “We traveled 48 hours to be there 72 hours. It was a very, very compact 72 hours of concerts and rehearsals. The Princeton Singers had very little free time; it was a real busman’s holiday.”

On day one, Sametz gave a lecture and demonstration for 100 Chinese choral directors on American approaches to choral tone. He opened with vocal warm-ups and overcame the language barrier.

“My Cantonese is non-existent,” he said, “but musically, the choral directors responded immediately. We had a very good interpreter, but music is an instant bridge for people who cannot otherwise communicate.”

Sametz then worked with the Shenzhen Lily Children’s Choir, which had prepared two movements of A Child’s Requiem, an oratorio Sametz wrote in memory of the 26 children and teachers murdered at Sandy Hook Elementary School in Connecticut in 2012. The Lily Choir later performed the oratorio sections with The Princeton Singers.

“The children were great,” Sametz said. “They kept wanting to take pictures of us and give us presents. There were selfies everywhere. It was like being rock stars, which is unusual for choral singers.”

The next day, the new rock stars were invited to join a flash mob in Shenzhen’s biggest shopping mall.

“The Chinese put a lot of production values into that event,” said Sametz. “The mall is eight stories tall. There were cameras from all eight levels focused on The Princeton Singers, who performed two Chinese songs and two American spirituals, while being surrounded by locals who clapped and sang along.

“We were also asked to sing the choral finale to Beethoven’s Ninth Symphony in Chinese accompanied by 50 ukuleles and 10 shamizen-like instruments along with little girl dancers. It was quite a conclusion. It was a bit surreal, with all of us doing a wave at the end. The Princeton Singers will remember that. I will remember that.”

That night, at the Shenzhen Concert Hall, The Princeton Singers earned another rave response after performing a two-hour concert of pieces composed mostly by Sametz. The following night, the singers joined 14 choirs from Shenzhen for the festival’s concluding concert, which featured selections from A Child’s Requiem and other pieces by Sametz, along with arrangements of American spirituals and folk songs and several Chinese pieces.

“The Shenzhen choirs were all excellent,” said Sametz. “There were adult and children’s choirs, men’s choirs, women’s choirs—they even have a flight attendants’ choir. They all came together at the end with The Princeton Singers to sing Ode to the Motherland.

“There were many government and city officials there, including the Minister of Culture. They seemed very excited to have us there.”

Sametz hopes to expand his ties with China’s choirs and choral composers through the ACDA and as a specialist in the Fulbright Specialist Program, a position to which he was named in 2013. The program helps scholars form partnerships with their counterparts in other countries.

The trip to Shenzhen was Sametz’s second to China as a choral director. In 2007, the Lehigh University Choir toured four cities in China.

This Sunday (Oct. 9), the choir will give a concert at 3 p.m. at St. Anne Catholic Church in Bethlehem, at 3 p.m. The men’s Glee Club and Dolce: The Lehigh University Women’s Ensemble will also perform. Dolce is directed by Sun Min Lee, the Robert J. Cutler Endowed Professor of Practice in Choral Arts.