A Case for Public Education 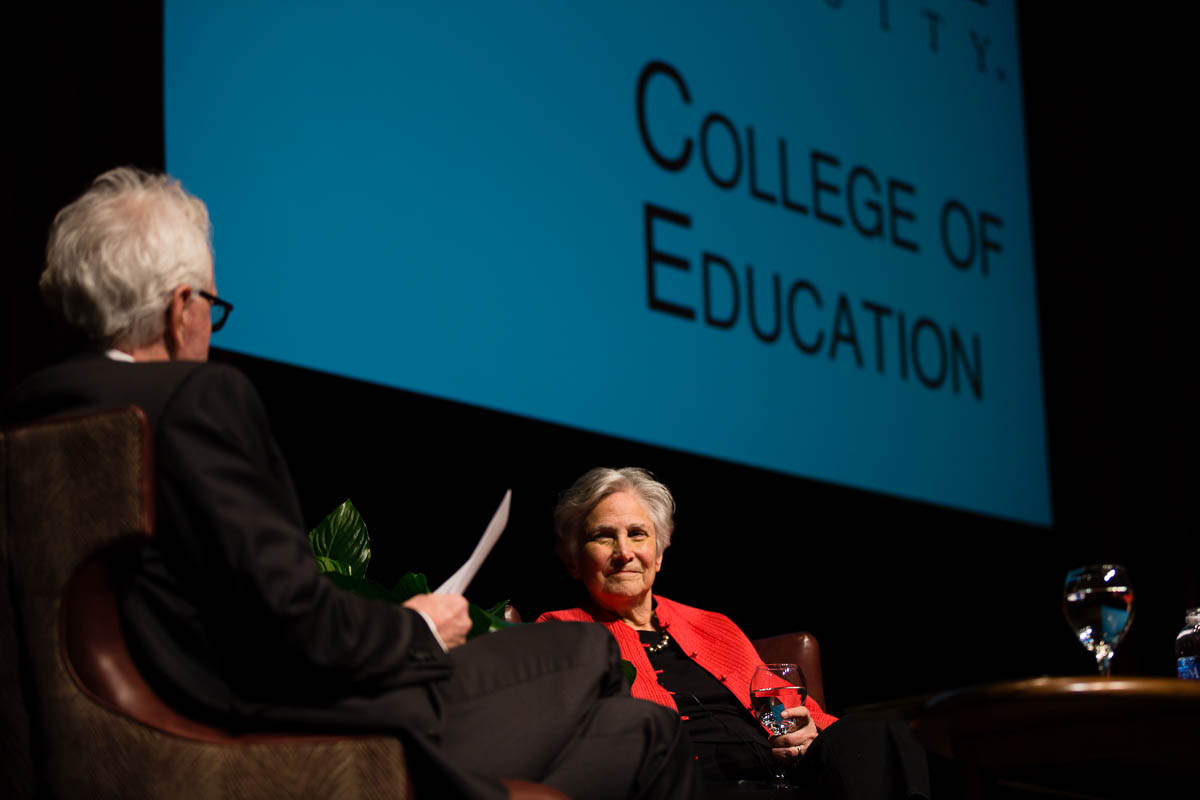 Calling the protection of public schools from privatization attempts 'the civil rights issue of our time,' education activist Diane Ravitch argues that public schools must be saved for a future generation of children.

Because I have more experience. I think I have more wisdom. I think I have more knowledge. Someone asked me the other day on my blog, maybe you'll change your mind again? And I said, Well, I might change if the evidence changes but what I will never change is, I will never sell out children or families or public education. Those are principles. There's a basic consistency in what I believed then and now, which is I've always believed in a liberal education for all children and the best possible education for all children. There's a certain kind of, I think, egalitarianism, which is why we use the term, I guess, all, but that's been consistent.

I think that what happened was that I was deeply engaged in two very conservative think tanks, one at the Hoover Institution and the other at the Thomas B. Fordham Institute in Washington. And I came to understand that many people I was working with wanted to see public education destroyed.

And I'm a [product] of public education. I wouldn't be here were there not public schools.

There's a single mother, two kids, living in Harlem, working three jobs. Her kids are in a public school. It's in bad shape. She wants better for her kids, and there's this alternative called The Success Academies [New York City charter schools], where kids respect the educational process. Why shouldn't she take that opportunity for her kids?

Well, I wouldn't tell her not to. I would say, do whatever you think is best for your child. Looking at it macro, the odds are, first of all, that her child would not win the lottery and wouldn't be accepted. And then if her child were enrolled in the Success Academy, there's a good chance that he or she might not even survive to the eighth grade, because they have a very high attrition rate there. If her child has special needs, she wouldn't last long. So take your chances....

I think that this picture of schools in Harlem that are in chaos is an overblown picture to begin with. I think it's a caricature.

There may be some [charter schools] that are doing very well. Wasn't that the original intent of charter schools, that they would act as laboratories that could be taken into the public schools?

There are some places in Philadelphia and other urban settings where kids are not getting a very good education. Certainly some of the reason is because of their home life, because of SES (socioeconomic status), which we know is the largest predictor of how well you're going to do.

You have some strong feelings about tenure. Doesn't the criticism that the main function of teacher-tenure is to help bad teachers keep their jobs at least have a little validity?

No, I actually think that the problem we have with teachers is not getting rid of them but holding on to them. First of all, if we have too many bad teachers, we have an administrator problem. Secondly, about 40 percent of people who enter teaching will leave teaching within five years. So we're wasting a lot of money training people, helping people become teachers and then they find they can't handle the work, they're not getting any support, they have poor leadership. Whatever the reason, 40 percent are gone, so we have a very serious retention problem. And instead of focusing on how do we fire bad teachers, we should be focused on how do we raise our standards to bring in the people who want to make a career of teaching and who have the preparation to be good at it.

Well, it's hard to answer a blanket question like that… because I don't know the facts of what the union cases were, whether what was said was true. I would say that that was 2003. This is 2015. Unions are now so much on the defensive. Who would have believed that the state of Michigan, where teacher unionism was so strong, is now a right-to-work state? Indiana is now a right-to-work state. Tennessee is a right-to-work state. So unions are very much in retreat. The percentage of American workers that are unionized is somewhere around 11 percent now, may be 11.3. And most of those are public sector workers. They're under assault. You would think that the unions had bankrupted our economy in 2008. I think it was the banks. (To laughter.)

But my own view is that people should have a speedy due process. I don't think that it should be something that's dragged out over years. For instance, in New York City there was a lot of publicity to the rubber room.…The way to resolve issues was to have a hearing, but it was up to the administration to provide the hearing, and the administration could keep people [in reassignment centers] for years without a hearing. If people thought they were innocent, why should they accept being fired without a hearing? But that was up to the administration, and it somehow became a union problem.

Unions, first of all, exist so teachers have a voice at the table so when the governor says, we're going to cut the budget by a billion dollars, there has to be somebody representing teachers, saying, don't do it, look what's going to happen....

Unions are fully supportive of [teacher] peer assistance and review. They're fully involved in the process, and they recognize that if somebody is not a good teacher, and they're tenured, they have to go.

Help me out here, because I've been saying we need to find common ground. Where can compromises be made by you or by all of us in order to move the debate away from some of the vitriol that characterizes a lot of the arguments today?

I know some of the people who are supporting and funding reform efforts. They're not doing it for monetary gain. They're not doing it for political reasons. They see a bureaucracy in the public schools that often thwarts meaningful change. They are putting their money and their time into these efforts because they want to help kids. Have you got a little bit of an olive branch to extend?

I remember many years ago when I was on the other side, and I went to see a very wealthy banker who was supporting the Manhattan Institute, a conservative institute, and I was all hot for choice and charters and wherever this would go, and he said, look, the United States is always going to have 80 percent of its kids in public schools, and I think now back to that conversation. That's a reasonable ground to begin. If we're always going to have at least 80 percent of our kids in public schools, and 10 percent in religious and independent schools and 10 percent in charter schools, then we can begin to have a conversation to find common ground.

But so many in the charter sector say, we're better than you, and we're going to drive you into the sea....

If the so-called reformers would give up their triumphalist winner-takes-all attitude, which is not grounded in evidence, then there would be common ground, but they have to give that up.  Watch the full conversation at lehigh.edu/ravitch 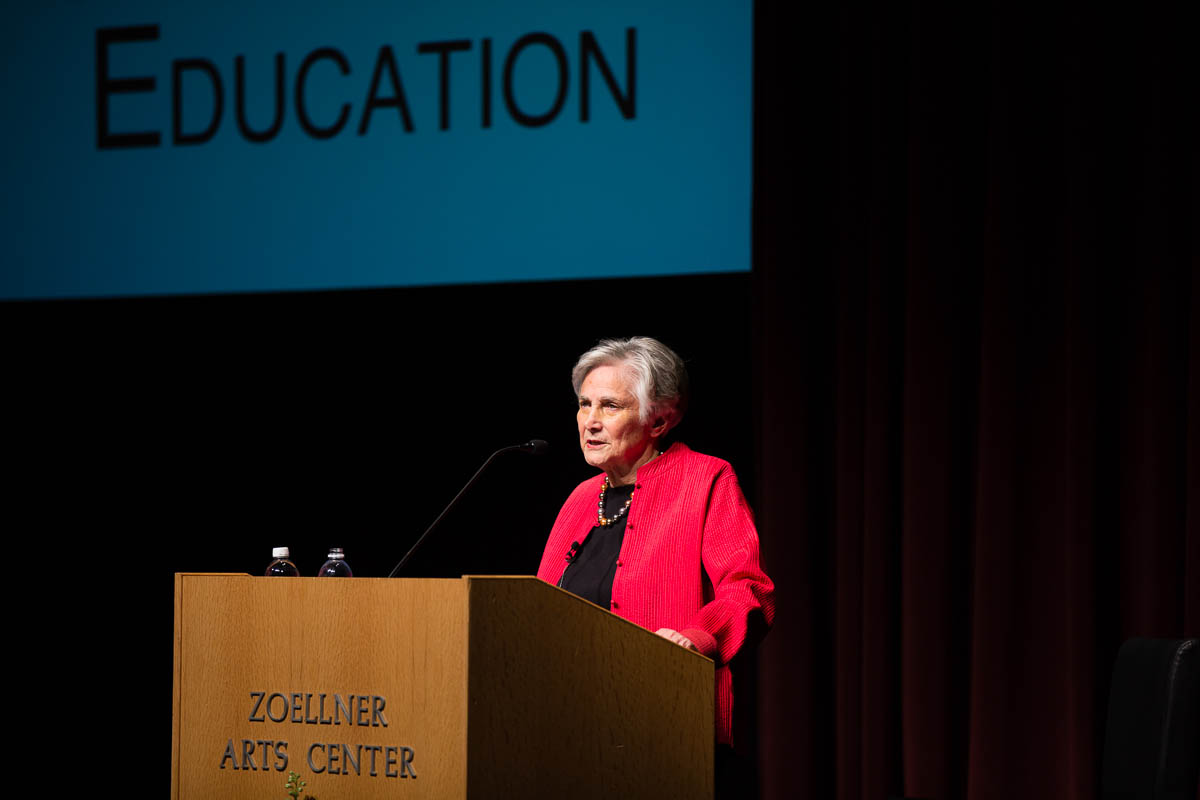 Diane Ravitch calls public education the ‘civil rights issue of our time’ in appearance at Lehigh. 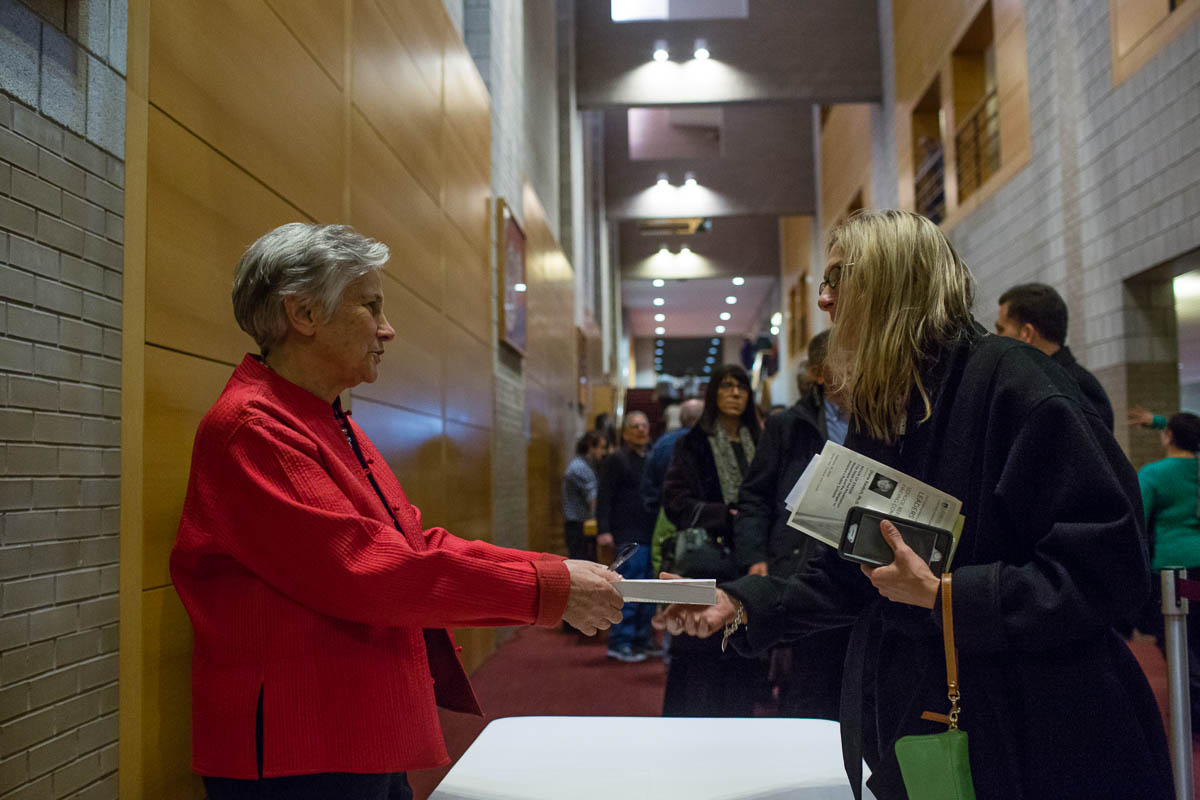 Diane Ravitch greets guests and signs copies of her book, 'Reign of Error: The Hoax of the Privatization Movement and the Danger to America’s Public Schools.'