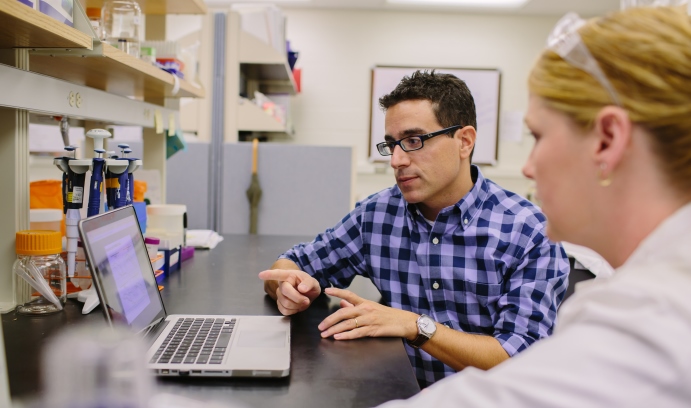 Damien Thévenin, assistant professor of chemistry, and Ph.D. candidate Kelly Burns are developing a system that delivers anti-cancer drugs exclusively to cancer cells based on the relative acidity of their environments.

The treatments for cancer, says Damien Thévenin, can sometimes seem worse than the disease itself.

Patients undergoing chemotherapy, he notes, suffer nausea, fatigue, loss of bone marrow and other side effects as the “chemo” kills good cells and bad alike.

“You have to know the kind of cancer a patient has and fit the targeting strategy to the cancer,” says Thévenin, an assistant professor of chemistry. “This requires a biopsy, a genomic analysis and drug targeting that is very specific to the type of cancer. All of this is labor-intensive and very expensive. In addition, while this strategy can be successful, it only works against very specific types of cancers.”

In the past two decades, Thévenin and other scientists have turned their attention to pH. The extracellular environments of almost all cancers, Thévenin says, have a lower pH than the environments of healthy cells, making them more acidic and giving cancer drugs a broader, more general target to aim at.

Thévenin and his students are developing a unique targeting and delivery system that uses a peptide, or amino acid chain, to seek and destroy cancer cells. The peptide, called pHLIP for pH (Low) Insertion Peptide, is one of the transmembrane domains of a protein called bacteriorhodopsin, which is sensitive to light and is found in highly salty water. (pHLIP is pronounced like the word flip.)

In lab tests, pHLIP has shown the ability to deliver a potent anti-cancer drug to cancer sites based on their low pH and to release the drug in cancer and breast tumor cells. The drug is the FDA-approved Monomethyl Auristatin E (MMAE). The project has been funded by a grant from the National Institutes of Health/National Cancer Institute.

In an article published earlier this year in Molecular Pharmaceutics, a journal of the American Chemical Society, Thévenin’s group reported that a conjugate, or pairing, of pHLIP and an auristatin anti-cancer drug inhibited more than 90 percent of cancer cell growth in two hours of incubation.

“These results,” the group wrote, “indicate that pHLIP-based auristatin conjugates may have an enhanced therapeutic window as compared to that of free drug, providing a targeting mechanism to attenuate systemic toxicity.”

•    The targeting system—in this case, pHLIP—must be able to locate cancer cells.
•    It must be able to deliver, or translocate, the drug into the targeted cell. The pHLIP-MMAE conjugate developed by Thévenin’s group accomplishes this through a pH-dependent folding that allows pHLIP to form a transmembrane helix within the membrane of a cancer cell.
•    The drug attached to the targeting device must be delivered only to cancer cells and avoid harming healthy cells.
•    The drug should be relatively cell-impermeable, meaning it will not escape, or diffuse out of, the cancer cell after it has been infused into it.

First, pHLIP has demonstrated the ability to target tumors in mice based solely on the acidity of the tumor environment and not on a specific biomarker, or cell membrane receptor.

Second, the pH at which pHLIP folds and translocates MMAE into cancer cells corresponds to the pH of tumor environments. During translocation, the drug is released directly into the cell cytoplasm without requiring interactions with cell surface receptors or the formation of pores in cell membranes.

Third, the pHLIP-MMAE conjugate effectively targets triple-negative breast tumor xenografts (grafts of tissue from one species to an unlike species) in mice. Triple-negative breast cancer, which lacks estrogen, progesterone and HER2 receptors, is more common in younger women and African-American women and is totally resistant to conventional targeted drug therapies.

“We have treated different types of cultured cells in vitro, including triple-negative breast cancer cells, with different amounts of pHLIP-MMAE at different pH levels,” says Thévenin.

“The pHLIP–MMAE conjugates exhibit between an 11- and 144-fold higher antiproliferative effect at low pH than that at physiological pH and a pronounced pH-dependent cytotoxicity as compared to that of free drug.”

In their paper, Thévenin’s group reported that the pHLIP–MMAE conjugates “induce a potent cytotoxic [cell destruction] effect (more than 90 percent inhibition of cell growth) in a concentration- and pH-dependent manner after only two hours incubation without any apparent disruption of the plasma membrane.

“We are also the first group to show in mice that a pHLIP-drug conjugate is still going to the tumor site as expected. We have discovered that the cytotoxicity [cell destruction] depends on the pH and on the drug concentration.”

Plans for the future

Thévenin has been studying pHLIP since 2006, when he joined the lab of Donald M. Engelman, a Yale biophysicist, as a postdoctoral researcher. Engelman had previously discovered that pHLIP changes shape at a low pH and that this property could be used against cancers.

Today, Thévenin’s group makes pHLIP in the lab. To do so, Burns links amino acids to each other using a process called solid-phase peptide synthesis and then joins MMAE and pHLIP with a disulfide bond. She is also currently synthesizing MMAE in a process that requires 19 steps.

Thévenin’s group collaborates with researchers at the Fox Chase Cancer Center, who conduct in vivo experiments. The group plans next to attempt to treat tumors in mice. They also plan to study a conjugate of pHLIP and a different aurastatin drug that is more potent and more cell-impermeable than MMAE.

Thévenin has two other research projects that are related to cell membrane proteins and biophysics. In one, he seeks to understand how a specific family of membrane proteins (the receptor protein tyrosine phosphatases) assemble and influence cell signaling. In another, he is developing backscattering interferometry to study membrane proteins.

The pHLIP project has also been supported by a Faculty Innovation Grant (FIG) that Thévenin received with Marcos Pires, assistant professor of chemistry, and by a Class of 1968 Fellowship, which supports research by faculty members in the College of Arts and Sciences. 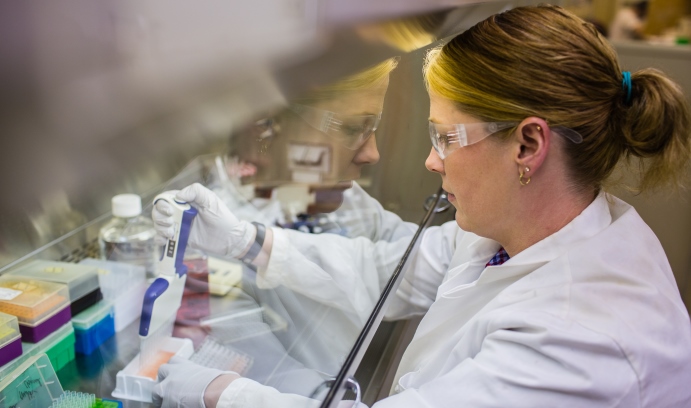 In the lab, Burns synthesizes both MMAE and pHLIP and joins them into a conjugate with a disulfide bond.