A biomimetic “bridge” to precision medicine 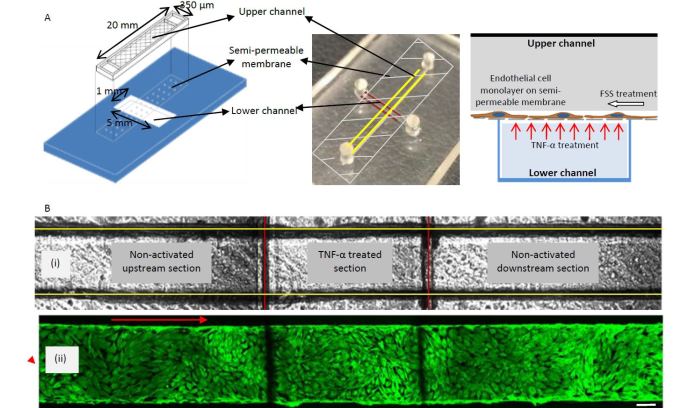 Nanotechnology has led to better diagnostic techniques and treatments for a variety of illnesses. Tiny devices that enable scientists to observe cell activity and deliver drugs to individual cells promise to revolutionize precision medicine for treatment of diseases such as cancer.

One obstacle to fulfilling nanomedicine’s promise is the inability to observe cell-to-cell interactions in an environment that closely simulates the dynamic environment inside the body. A micro-fluid environment that mimics blood flow is key to learning how cells become damaged by disease—and how they might respond to treatment.

Now a team of researchers at Lehigh and the University of Pennsylvania has developed a technique that uses antibody-coated nanoparticles as imaging probes to watch cell-to-cell interactions under micro-fluid conditions.

The researchers have successfully applied the technique to the study of blood vessel inflammation, a condition that sets the stage for heart disease, the number one cause of death in the U.S. and globally. The group published its findings in Biomicrofluidics, a journal of the American Institute of Physics, in an article titled “Biomimetic channel modeling local vascular dynamics of pro-inflammatory endothelial changes.”

“We have shown that our technique can be successfully applied to the study of inflammation and are working on a way to similarly observe and intervene in the repair of tumor cells,” said Yaling Liu, associate professor of mechanical engineering and mechanics and of bioengineering at Lehigh and a co-author on the study.

Chronic, low-grade inflammation is strongly associated with dysfunctional endothelial cells, which form the inner lining of blood vessels and are critical in regulating cell-to-cell interaction as part of the body’s immune system response. The appearance of intercellular adhesion molecule-1 (ICAM-1) on the surface of endothelial cells is a sure sign that inflammation and disease are present. Therefore, observing the activation of endothelial cells under disease conditions is essential to understanding how heart disease develops and how to stop it.

The best way to observe these changes is inside the body, but this is difficult. Monitoring the disease in a static cell culture—by removing and growing cells in an artificial environment such as a petri dish—is limited in its ability to accurately portray the dynamic interactions under blood flow conditions.

In addition to Liu, the team from Lehigh includes Linda Lowe-Krentz, professor of biological sciences; H. Daniel Ou-Yang, professor of physics; and Antony Thomas, a Ph.D. candidate in bioengineering. They collaborated with Vladimir R. Muzykantov, professor of pharmacology at Penn, to develop a blood vessel on a chip to study the dynamics of ICAM-1 on the surface of endothelial cells activated under disease conditions.

“We were able to mimic and observe the dynamic transfer process—that moment when the ICAM-1 antibody-coated nanoparticles bind to the cell signaling inflammation upregulation by endothelial cells—on a chip. We were also able to precisely control the flow of fluid,” said Liu.

“This reliable and relatively simple method simulates the conditions under which endothelial cells exist in the body, making it possible to observe cellular pathology in real time, and to analyze differences in cells’ responses to treatment.”

Because this new technology creates a platform to focus on a specific diseased region, Liu and his colleagues believe it is ideally suited to testing new disease treatments.

Healthy cells exist on the same chip as diseased cells, which allows for more localized control to test a particular drug. This, combined with the simulated blood flow environment, also allows researchers to gather a much more robust data set than they could by using a static culture.

The team’s use of antibody-coated nanoparticles as imaging probes to assess the characteristics of cells is another key benefit of the new technology. Using the nanoparticle probes eliminates the need to employ radioisotope-labeled ICAM-1 antibodies to track cellular interactions—a technique that is fraught with regulatory and safety challenges and is also very expensive.

“Our system provides a safer, less cost-prohibitive way to test a new drug in a setting that closely approximates a diseased region’s environment,” said Liu.

Reducing the risk and cost of trials

A 2012 study submitted to the U.S. Department of Health and Human Services detailed the costs of clinical drug trials. The authors of “Examination of Clinical Trial Costs and Barriers for Drug Development” estimated the cost of completing clinical trials for a new drug at $50 to $115 million depending on the therapeutic area—with respiratory system and oncology among the most expensive.

The study also identified clinical trial costs as a possible reason behind a slowdown in applications for new drug approvals. Between 2003 and 2012, the number of FDA approvals of new drugs per year fell from the previous decade’s average of 30 to 25.7. The average yearly number of filings also fell slightly over the same period. “A reduction in the drug application pipeline,” the researchers wrote in Biomicrofluidics, “means fewer novel therapies in future years.”

The technology developed by the Lehigh-Penn team gives pharmaceutical companies an early look at the efficacy and safety profile of a new treatment before committing to clinical trials, thus incurring less risk and lower costs. Liu says this early look could act as a “bridge” between the development of a drug and human trials. Ultimately this “bridge” could result in the development of more novel disease treatments that reach consumers more quickly.

By directly culturing patient cells in their biomimetic chip and testing under similar conditions observed in vivo, it may provide insights for precision medicine that is tailored to a specific patient under a patient specific environment.

Liu and his colleagues have received an NSF Innovation Corps grant and are working with Lehigh’s Office of Technology Transfer to commercialize the technology under the company name PharmaFlux. Ira Weisberg, the group’s industry mentor and the CEO of Amherst Pharmaceuticals, and Christopher Uhl, a Ph.D. candidate in bioengineering at Lehigh, are helping lead that effort.

“As we continue to develop the platform beyond the study of inflammation,” Liu says, “we hope to make a significant contribution to the acceleration of targeted drug delivery and help usher in a new age of better medicine.”

Support for the project was provided by the National Science Foundation (NSF) and the National Institutes for Health (NIH). 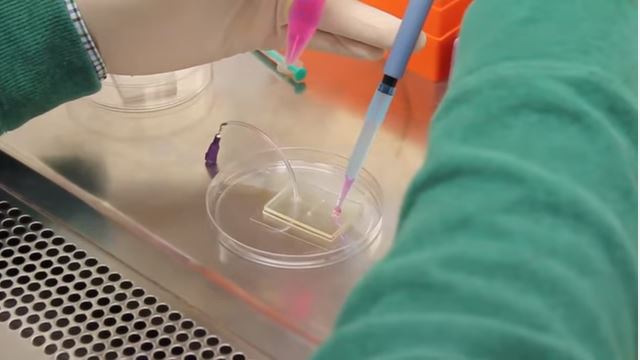 Current in vitro drug testing is costly, time-consuming and relatively poor at predicting drug performance in vivo. The PharmaFlux technology is a micro-device testing service for drug candidates in mimicked disease micro-environments.