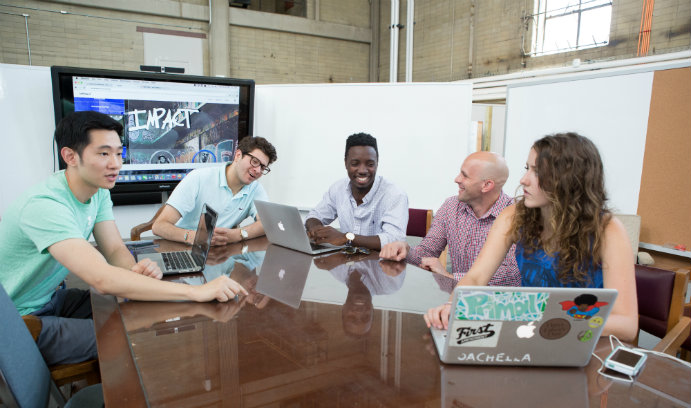 David Ro ’15, Thomas Verdi ’17, Asante Asiedu ’17, Professor Joshua Ehrig and Anna Gillis ’17 developed IMPACT, a website that ranks hip hop artists by metrics and assigns them scores that highlight the most socially conscious artists and leads to discovery of their music.

It’s the only Mountaintop project whose proposal began with a line from rapper Jay Z:

“No lie, just know I chose my own fate. I drove by the fork in the road and went straight.”

For faculty mentor Joshua Ehrig, the line was a perfect setup for the project, which forced students out of their comfort zones to explore a combination of entrepreneurship, software ventures and hip hop music through Lehigh’s self-directed 12-week summer Mountaintop program.

The project attracted a diverse team of students who, intrigued by the combination – some with experience with the project elements, some not – threw themselves into a journey of discovery with a goal of developing a “minimal, viable product” that would go live by the program’s end.

Their first assignment? Write and perform an original rap song and produce their own video in 24 hours. Their second? Get 1,000 views and 100 likes of the video on social media in the next 48 hours – a goal they met and doubled.

“They not only created their own product, they learned to market it in 72 hours,” said Ehrig, a professor of practice in the department of management. A longtime hip hop fan, Ehrig ran technology companies before joining Lehigh, where he teaches entrepreneurship through the university’s Baker Institute for Entrepreneurship, Creativity and Innovation. “I learned right then I had a really special team and a group of students that was going to do great things.”

Students immediately got to know each other’s strengths and differences and how to perform together as a team, said Asante Asiedu ’17, a marketing major minoring in entrepreneurship and finance. “It was a great ice breaker,” he said.

While sharing an affinity for hip hop music, students learned they hailed from diverse locales: California, Brooklyn, Philadelphia and originally from Ghana and South Korea. They also represented a range of undergraduate majors: studio art, computer science, marketing, English and business and all three of Lehigh’s undergraduate colleges: business, engineering, and arts and sciences. They brought different skill sets and personalities as well, from methodical and technical, to outgoing and creative.

Making the video together was just the beginning.

Over the next few weeks, students got a crash course in entrepreneurship. They learned how to do business model canvases, conduct customer discovery and create a minimal viable product – a rapidly built product with minimum features that can be deployed and tested with customers. They practiced their skills through developing a business model around a to-be-released Wu-Tang Clan album.

The team attended Tech808, a hip hop-inspired tech conference in Washington, D.C., where they heard from tech-space and startup experts on building businesses. They learned about social media and hip hop, guerrilla marketing and hip hop’s history and culture.

Rawle Sterling ’14 ’16G, a graduate student in American Studies, gave the undergraduate students a grounding in the background, influence and trends of hip hop, including Skyping in hip hop artists at various levels in the music industry to share their personal experiences.

“I wanted to make sure that it was something that I could communicate not just on the technical level but one that so people on the team could really relate to and understand,” said Sterling, who also advised a team of Pennsylvania School for Global Entrepreneurship high school students who assisted with the project. “So I presented the different pillars of hip hop, going through breakdancing, the producing or DJing, MCing and graffiti, and then tying that into how hip hop has evolved. Hip hop is constantly changing because it’s a reflection of our society.”

“Generally, in an entrepreneurship course, you’ll have CEOs or founders of startup companies,” said Ehrig. “In this case not only did we have that, but we had hip hop artists, graffiti artists, various facets of the hip hop community. And when you put those two together, it creates a special kind of dynamic, and it actually helps students develop a really unique skill set.”

Project team members were then set to begin developing their own ideas, to seek customer feedback through focus groups, and to develop prototypes and test feasibility.

Ideas ranged from a large-scale concert to aggregating hip hop data to correlate with brand mentions and stock market activity. Students came up with the idea of developing a website that would rank hip hop artists by metrics and assign them scores that would highlight the most socially conscious artists and lead to discovery of their music. They called the effort “IMPACT.”

On a recent day, the team scanned through digital images of logos for the product, discussed background colors for the website – which featured pictures of hip hop artists and embedded music videos – and hand-coded links to videos while the beats of Kanye West and Jay Z echoed through their portable whiteboard-enclosed corner of the cavernous C-3 Mountaintop building.

They were excited about the idea and felt it had the potential to make a positive impact by highlighting hip hop artists who were giving back to their communities and sharing socially conscious messages. But that wasn’t enough. They realized they wanted interaction with the site to give back too.

The team’s final product is a web application that donates a portion of canned goods to an artist’s hometown based on number of listens through the site.

“Our mission is to donate food to those in need while fostering music discovery of socially conscious artists,” said Thomas Verdi ’17, an English major with a concentration in creative writing minoring in entrepreneurship.

“It’s been incredible to see how the project has evolved over the course of the summer,” Verdi added. “We started in a completely different mindset compared to where we are now, but each time we’ve pivoted or shifted focus has been a step forward. I’m excited to get the site up and running and to see if we can actually make a difference both in the world of music discovery and in the world itself.”

David Ro ’15, a computer science and business major who built the website from scratch using Ruby on Rails ®, with collaboration from the team, developed an algorithm that selects a featured artist of the week based on criteria such as an artist’s socially conscious media presence, most recent donations relative to net worth and local impact. Donations collected through the site go to the featured artist’s hometown each week, Ro said. The website currently features profile pages and videos for 150 artists, he said.

“Our aim is to start with more popular artists, then over time, after gaining an audience, focus on less-known artists in order to aid users in new music discovery,” Asiedu said.

Pivoting the project gave it more focus and direction, said team member Anna Gillis ’17, a studio art and computer science major. “I’m much more proud of this idea, and I think it has greater power to do good,” she said. The process itself has also been instructive and rewarding, she said.

“For me a lot of it has been the difference between conceptualizing something and actually doing it,” Gillis said. “We have this idea of this website and it’s this big idea but what actually goes into it is so much, so much work and so much time. So I think this has been really inspiring in the sense that we haven’t given up on anything yet, and we’re not going to. We’re going to keep doing it after this. I think that motivation and that first experience of making something that you kind of imagined is a very good takeaway.”

While students brought individual skills to the project, from marketing and design to writing, research and technology, as a group they gained experience in web front-end design and back-end development, pre-launch and launch strategies, branding, identity and product development, Ehrig said.

The project bridged a gap between business and humanities education to give students and aspiring entrepreneurs both the technical and communication skills needed to succeed, he said.

Its fusion of disciplines ultimately aimed to help students become “more well rounded, understanding their surroundings, their environment, society and really how they can become better individuals both at Lehigh and after,” Ehrig said. “I think it opens their eyes to a whole new world … and is impactful not only in modes of thinking, but potential new ventures and market opportunities.”

Sterling said the results of the project can have a real impact.

Going back more than two decades, hip hop has its roots in social consciousness and a history of giving voice to individuals’ and communities’ experiences, he said. It’s especially topical now, he said, as the #blacklivesmatter campaign and issues ranging from racial justice and police brutality to same-sex marriage and the Voting Rights Act are at the forefront.

By spotlighting socially conscious artists, the website amplifies the artists’ messages and brings attention to their causes, while giving fans and members of the website community exposure to more songs and artists and the ability to communicate about them with their demographics across social media.

That alone has the capacity to start conversations, build awareness and change lives, Sterling said. The donations then take it to another level.

“If I am an artist, I would love to see what power lies behind my fan base, because they are powerful,” he said. “You have over 2 million followers on Instagram, half of them listen to songs on this site, that’s a lot of money that is going somewhere, that is doing a lot of good, and that says a lot. That’s the power of this website.” 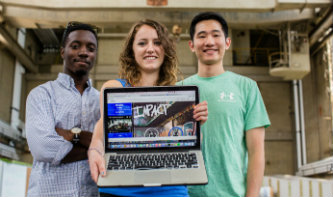 Students shared an affinity for hip hop music but brought a variety of skill sets to the project. 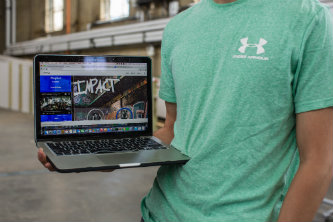 The team's final product was a web application that donates a portion of canned goods to an artist’s hometown based on number of listens through IMPACT. 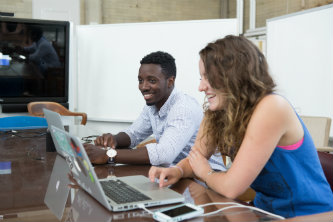