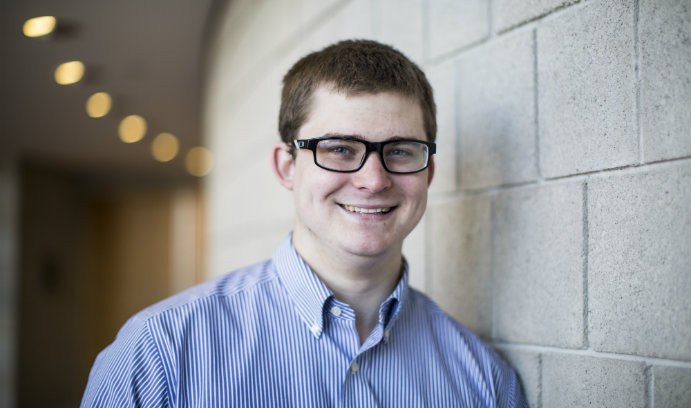 Glenn DuPaul '14 parlays his skills into a job with NBA’s Brooklyn Nets.

Lehigh alum Glenn DuPaul, who broke into the world of sabermetrics with an internship at the Kansas City Royals, has a new arena for applying his analytical skills – professional basketball.

DuPaul, who graduated from Lehigh in 2014 with a degree in economics, is the newly named director of basketball analytics for the Brooklyn Nets.  He is the first person to hold that title for the team.

Thanks to the movie Moneyball, most people know about sabermetrics, the objective analysis of baseball game statistics. In basketball, the term some people use is APBRmetics (the Association for Professional Basketball Research Metrics). But DuPaul, whose lifelong dream was to work in the front office of a professional sports team, doesn’t use any of the terminology to describe what he does.

“In the end, it’s analysis,” he said. “It’s research really, to put it most simply.”

“It’s trying to objectively evaluate talent and to do it better than other teams,” he said.

DuPaul not only looks at the Brooklyn Net’s individual players but also at the bigger picture, evaluating players on other teams in the National Basketball Association as well as college players.  A team executive might ask about a potential trade, or a coach might ask about certain opponents. DuPaul uses his ongoing research to answer their questions. His opinions, he said, have been taken into account in discussions about potential trades.

“Analytics are a tool,” DuPaul said. “The general manager has to make player personnel decisions, and he gets as much information as he can to help him,” including salary, medical and scouting information. “Analytics are a piece of that puzzle. You can weigh them more – or less.”

All along, DuPaul’s goal had been to apply his Lehigh degree and his sports knowledge to land a job with a professional sports team. He got help at Lehigh from his adviser, James A. Dearden, department chair and professor of economics, and Larry Taylor, also a professor of economics. Both guided him in choosing classes and internships so that he could eventually turn his dream into reality.

“I wanted to use the resources at Lehigh to mold myself into becoming the best candidate possible to get a job like the one I have,” DuPaul said.

Baseball seemed a likelier avenue to pursue. Though DuPaul was an avid Lehigh basketball fan – he was on hand when Lehigh beat Duke in a 2012 NCAA tournament – he played baseball in high school and dabbled with baseball analytics as a Lehigh student. He also interned with Baseball Info Solutions, a national baseball analytics firm in Coplay, Pennsylvania, and wrote for trade publications such as Beyond the Box Score and The Hardball Times. One of his articles, Controlling the Strike Zone and Batting Average” was nominated for an award by the Society for American Baseball Research. Before moving to the Brooklyn Nets, he worked for two seasons as an intern with the Kansas City Royals.

As the NBA began to embrace advanced analytics, however, DuPaul recognized his expanding options. He saw an online posting for the Brooklyn Nets job, and knowing he was qualified, applied for the position. After a series of phone interviews, written interviews and reference checks, he was flown out to New York, where he gave a PowerPoint presentation to demonstrate his analytical skills.

He admits to being a little nervous at first at the prospect of moving from baseball to basketball, not only because his familiarity with baseball was stronger but also because the two sports presented different types of problems analytically. But he said he has gotten a lot of help from his colleagues.

“For baseball, I would know what we wanted to measure, what we were exactly looking for,” he said. “I’ve had to do a lot more asking – should I take this into account? But it’s been good.”

And given the dynamics of basketball – the motion of the sport and the teammate effect – the analytics can be more challenging. He’ll look at such things as which players can get to certain spots on the court and take shots they’re most likely to make, or which players will force others into bad locations.

“There’s a lot of strong basketball knowledge and basketball talent here,” said DuPaul.  “I bring something to the table that they really didn’t have, and that gives me confidence.”