Accelerating the push for epilepsy medications 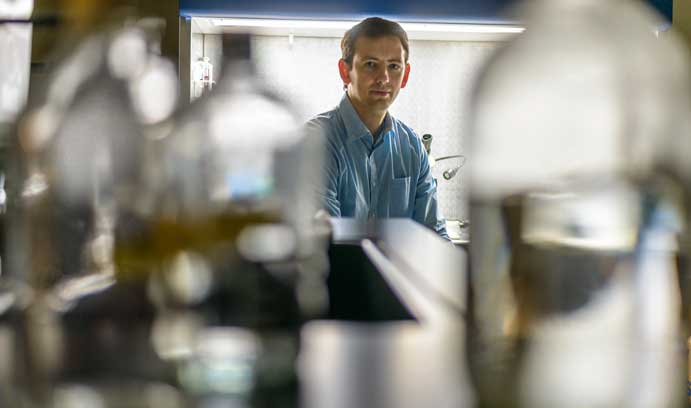 Approximately 125,000 Americans each year develop epilepsy, a brain disease marked by recurring seizures that are sudden and unpredictable and can have dangerous and even fatal consequences. There is no known cure for epilepsy, but medications can control seizures.

Some 30 percent of epilepsy patients, however, suffer seizures that do not respond to existing medications, says Yevgeny Berdichevsky. And the gradual onset and slow progression of the disease complicate efforts by researchers to identify and test new anticonvulsant drugs quickly.

Berdichevsky, an assistant professor of electrical and computer engineering and director of the Neural Engineering Lab, recently received a grant from the National Institutes of Health (NIH) to help speed the process of drug discovery by testing multiple potential epilepsy medications simultaneously.

By performing drug assays on 1-inch-square chips imprinted with microwells, he reduces the area required to grow individual epilepsy cultures, or tissue samples, and makes it possible to test as many as 18 drug candidates at one time. The samples, taken from the brain’s hippocampus, where epilepsy frequently occurs, have the thickness of several human hairs.

A network of microfluidic channels divides the samples into experimental groups while enabling the “feeding” of the samples, which have a high metabolism and require large amounts of glucose and amino acids. The channels, which Berdichevsky is developing with help from Jing Liu, a Ph.D. candidate in electrical engineering, also facilitate the application of drugs, inhibitors and other molecules.

The chip is also imprinted with multiple arrays of electrodes, each the size of a period, which detect the electrical activity in tissue samples that signifies epilepsy. This activity can take up to two weeks to develop and can be difficult to measure in a timely fashion because of the need to precisely control humidity, carbon dioxide levels and other environmental parameters.

The individual research techniques that Berdichevsky employs—imprinting electrodes on a chip and patterning the chip surface with microfluidics—are well-established. What makes his approach novel, he says, is combining the two techniques to perform experimental tests on 3D tissue samples.

“To do faster drug screening,” he says, “we need to monitor the activity of many slices of tissue simultaneously, from the time current is applied through the electrodes to about 14 days later, when epileptic activity is present.

“Our goal is to increase the rate of drug development by significantly improving the scalability of long-term electrical monitoring of epileptic activity in vitro. In the end, the testing of multiple drugs at a time is an engineering problem.”

Berdichevsky hopes to scale up his testing platform so that it can screen small-molecule inhibitor candidates in drug libraries.

“What we’re doing is early-stage drug target discovery,” he says. “If we find that a molecule inhibits epileptic activity, that tells us what protein is causing epileptic activity and would be a good target for a drug.

“Once we find a target, we can let the pharmacological companies test drugs.”

Berdichevsky, a faculty member in Lehigh's bioengineering program, began studying epilepsy five years ago at Massachusetts General Hospital as a postdoctoral researcher. There, he came up with the idea of testing multiple slices of the hippocampus.

“Neuroscience is a perfect application for electrical engineering and biology,” he says. “It represents that part of biology that runs on electricity and it involves signal processing and amplifiers, electrodes and microchips, as well as chemistry. Neurons communicate with each other electrically, and they combine to form circuits, like the electronic circuits of a computer.”