During his final year at Lehigh, Penn Scott ’13 started Xiphias, a project aimed at influencing the design and engineering of high-performance automobiles. Working within the confines of a teammate’s small bedroom, Scott, Marcus Risland ’14, James Suh ’14, Miguel Roman ’13 and Robert Vargo ’14 researched automotive aerodynamics, support structures and powertrain systems to develop a professional-grade car design. They planned to then realize their design with 3D printing.

“We needed space,” says Scott. “We also needed the funding support in order to really just be able to do our work and proceed with doing some of the 3D printed prototypes because it’s still somewhat of an expensive technology.”

Fortunately for Scott and his teammates, they were soon able to take their project quite literally to new heights: at the top of South Mountain. Lehigh’s Mountaintop program, then in its first summer, provided abundant space inside a former Bethlehem Steel facility as well as the financial support needed to advance the project.

“[Mountaintop] was critical not only to advancing the project but also to developing us professionally,” says Scott. “[Xiphias] was a tremendously successful project and it ended up being very instrumental in developing my career and [the careers of] the other guys that were on the team with me.”

His first assignment placed him with Ingersoll Rand’s commercial HVAC division. At their 1.2-million-square-foot facility just outside Nashville, Tennessee, Scott served as a subsystem leader for new product development and introduced new technology. Now based at the company’s North American headquarters and corporate center in Davidson, North Carolina, Scott currently works for Ingersoll Rand’s vice president of enterprise systems engineering and advanced technology, leading the development of the manufacturer’s 3D-printing strategy and introducing some of the same simulation technologies that he used for his Mountaintop project.

“We are using some of these new innovative technologies to cut down the weight of our product, enhance the ease of assembly for people in our factories putting these products together and save us money on materials,” says Scott. “I would say that [this opportunity] came, for me, out of Mountaintop.”

Scott, like most Lehigh graduates, had been academically successful before his Mountaintop experience. He calls the program “a rare, strong differentiator.”

“I would say that I was not on track to take the direction I’m headed in now before Mountaintop. ... It’s a tremendously developmental experience, particularly because of some of the innovative technology that we decided to pursue and exhibit through our work,” he says.

Beyond the focused competency skills Scott acquired in, for example, mechanical analysis and product design during his time at Mountaintop, Scott cites the importance of the lessons he learned about strategy. The student-driven nature of Mountaintop, he says, helps students develop that skill.

“Being detail-oriented is obviously very important to getting your job done, but I think the ingredient that people may overlook is that strategic level. It’s tempting with whatever work you do—software development or mechanical engineering or anything—to just dive right into the details. You can get lost very easily if you don’t have that competency at a higher level to know where you’re going. That’s just something that can’t really be taught in a class,” says Scott.

It can, however, be taught in an environment where students have the support of peers and mentors who can provide advice and guidance but not control the direction of a project. This, says Scott, is “one of the critical ingredients to what made our project within the Mountaintop context a success.” He and his team called the shots and made the decisions. The project’s success or failure rested entirely on their shoulders.

“[There is a] very strong connection, a very strong relation,” says Scott of his Mountaintop experience and his current position. “Mountaintop put me personally on the right trajectory to get where I am now and obviously wherever I’m going in the future.”

“What we look for in hiring people, specifically out of school, is that even though they are indeed just graduating, we like to see if they have some experience in industry or industry-type experience. We like to see people who have taken the initiative to lead something,” says Nissen, director of engineering excellence for Club Car. “[Mountaintop] fulfills many of the things we’re looking for: [individuals who are] self-directed, independent, motivated, willing to work on projects in a team... and go for a goal and actually accomplish it.”

Ingersoll Rand recognized those qualities in Scott, who speaks highly of the company, particularly with regard to the respect and extensive opportunity the company grants to young college graduates.

“Being able to work myself into this unconventional but highly innovative position at a very large, established, diversified company... I think that’s in many ways kind of the ideal, picture-perfect example of what you would hope from somebody who graduates from the Mountaintop program: somebody who strikes out and does something entirely new and innovative within an established framework.”

The Mountaintop program kicked off its third summer in May, providing an invaluable opportunity for 151 students to follow a similar path: directing their own research and developing skills that will set them apart from their peers and set them up for success in the future. 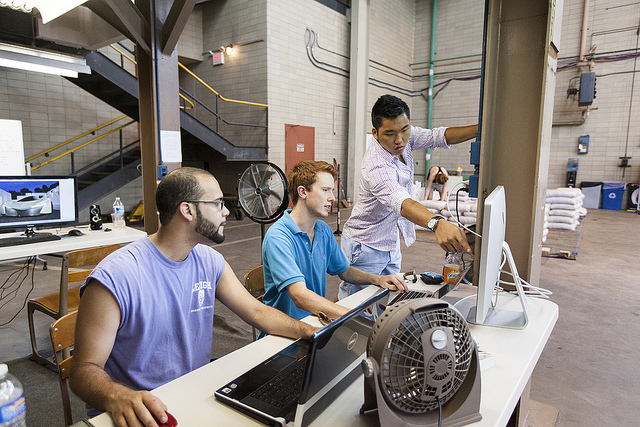 Penn Scott '13 (center) collaborated with James Suh ’14 (right), Miguel Roman ’13 and others on the Xiphias project during the first summer of Lehigh's Mountaintop initiative.

Scott and his teammates aimed to develop a professional-grade car design through Xiphias, which won several awards.