The Founding of UMOJA House: An Oral History

Thirty years ago, the Umoja House opened its doors on the Lehigh campus, becoming both a community and a haven for underrepresented students of color. This is the story behind the black student activism that led to the Umoja House founding in the aftermath of one of Lehigh’s darkest days—and the university’s continuing efforts to make Lehigh a more inclusive place.

“It’s funny about history,” says Melvin Gibson ’90, one of the original members of Umoja House. “As you walk the path, you don’t know that you’re actually creating it.”

So it was among the small group of minority students who took up residence in Umoja House at the start of Lehigh’s 1989-1990 academic year. Back then, the Umoja House was not located on “the Hill,” as it is now. Its address was Warren Square A, a brick, two-story building on the west side of campus with an inviting front porch and side yard.

Born out of black student activism, the house became a haven for underrepresented students of color who, along with Lehigh administrators, considered “Umoja”—the Swahili word for “unity”—a fitting name for the residence. It was the first campus house specifically for African American, Hispanic, Asian and Native American students.

Concerned at first that the students would be segregating themselves, then-President Peter Likins found himself swayed by the passion and logic of Leon Caldwell ’91 ’93G, who also had immersed himself as a student in broader Lehigh initiatives to support minorities and athletes.

“I realized only after I got there that Lehigh was 90% white, 50% engineering, 25% women,” says Likins, who served as Lehigh president from 1982 to 1997. “The African American population must have been about 2%. The world was changing, and the world of higher education was changing, and Lehigh was behind the curve. This was not a very promising environment to establish an Umoja House.

“So what changed? In seven years, how did the environment change in such a way that it was possible to create the Umoja House? I’ll tell you the answer is the remarkable leadership among the students of color who came to us in the intervening years. They did it. They did it.”

On the 30th anniversary of the founding of Umoja House, here then is the story behind its creation, as told by students who conceived the idea, chose to live there or spend time there, and by the Lehigh administrators who recognized the need and helped to establish the residence.

As a further sign of its cultural acceptance, Umoja House was expanded and relocated to the Hill in 2003.

Lehigh commemorated Umoja’s milestone year with a series of celebratory gatherings around the theme of “Honoring the Past, Embracing the Future.” 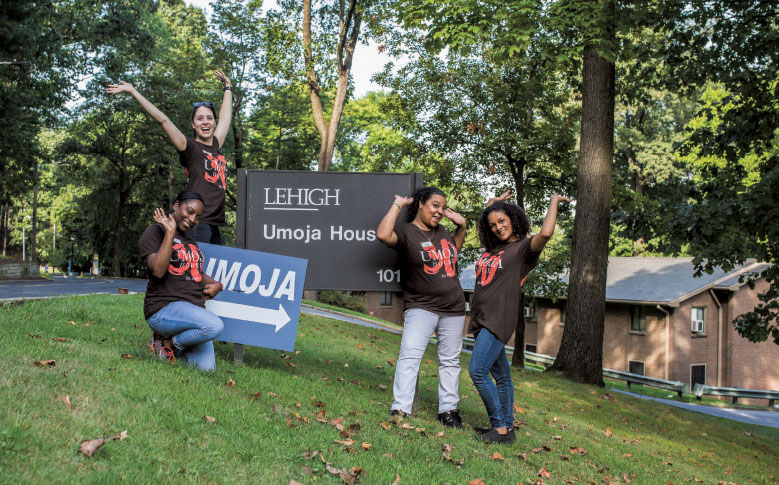 Umoja House volunteers help the Class of 2023 move into their dorms.