Inside a mud hut, students seek a solution for developing countries.

The mud hut rises on the slope of a hill at the Mountaintop campus—a 6-by-8-foot replica of a cooking hut typically found in developing countries such as Uganda.

In searing heat, over the course of several June days, a group of students painstakingly built the hut. It is at the center of their search for ways to ventilate cooking huts naturally and to reduce the indoor air pollution that plagues much of the rural developing world.

The students toted tree limbs from a nearby wooded area to weave the hut’s frame and dug holes in the rocky soil to anchor the wood posts. Using their feet, they mixed clay, sand, water and sawdust in a kiddie pool to make mud adhesive for the walls. Then, by hand, they carefully built the 7-foot walls with the mud, slowly adding layers around the wood posts and tree limbs. On top they set a metal sheet roof.

“We are trying our best to make it as close to a cooking hut that would be created in developing nations, more specifically, in Uganda,” says graduate student and social scientist Marie Theresa Mejia, one of six students on the “Innovation in Ventilation” team. “We’re also finding ways to replicate it that would allow us to work in the time frame that we have.”

The combined engineering and social science research project, under way this summer at Mountaintop, not only explores practical solutions to indoor air pollution but also analyzes the underlying social issues that lead families to burn wood for fuel.

Numbers from the World Health Organization tell the story:

• Half of the world’s population, almost all in developing countries, burn biomass—wood, animal dung and crop residues—and coal to cook their food and heat their homes.

• Of those “forgotten” 3 billion people, more than 4 million die prematurely from illnesses linked to the pollutants emitted from the indoor burning of bio mass fuels.

• More than half of the premature deaths among children under age 5 stem from pneumonia caused by the soot that the children inhale indoors.

Also mentoring the team is Kelly Austin, assistant professor of sociology and anthropology, a participating faculty member in the global studies program, and director of the health, medicine and society program.

With the hut now built outside of Building C at Mountaintop, the students will set up a cookstove inside, using a ring of rocks they unearthed while digging holes for posts.

Wearing face masks to protect them from breathing in harmful matter, they will start a wood fire and boil water. While starting and maintaining the fire to boil the water, they will use hand-held black carbon monitors to measure the level of the tiny, black particles being released into the air by the fire.

The air quality monitoring will continue as the students naturally ventilate the hut in different ways, strategically placing holes in the mud walls for good air flow and perhaps cutting out a window. They’ll also try raising the height of the cookstove to determine if that would make a difference in protecting people from breathing in the particulate matter.

So far, global solutions have focused on replacing the traditional cookstoves in the rural developing world with cleaner, more efficient ones. Team member Schrum says, however, that new research suggests the “cleaner” cookstoves may not actually improve the air quality in the huts as initially believed.

Also, many families wind up selling their new cookstoves to get something they feel they need more, Holland said, or they do not easily adapt to the new technology.
“So poor people are still using the same technology they’ve always used, which is open fire burning in many cases.”

To keep with cultural norms and to provide low-cost solutions, the Mountaintop team is exploring whether an easily implemented natural ventilation system instead could reduce people’s exposure to black carbon in the huts and reduce the health risks of burning bio mass.

“Our intervention would not be providing them with something new in a way that their traditional values, their traditional way of doing things, are going to be completely taken out of the picture,” Mejia says. “Another thing to keep in mind is that many of the kitchens there have been built for years, so our intervention is something they can do without having to take their structures down and rebuild.”

The students may try cutting a window in the hut to determine whether it’s practical and whether it would make a difference in the inside air quality. In consultation with a contact in Uganda, Schrum said, they learned that cooking huts get built without windows because it’s cheaper and easier to not have to frame for a window. Plus, she said, windowless huts provide protection from torrential downpours and animals.

As part of the project, the students also are examining the social rights issues connected to the indoor air pollution problem.
“We dove into this project and we were able to look into whatever topic we wanted to look into,” Mejia says.

• The effect of gender roles on people’s health, given that women and children traditionally handle household chores.

• The effect of structural adjustment policies that emerged during the debt crisis in the mid-1980s as a way for poor countries to pay back lender countries. (What leads people to burn wood to cook in the first place?)

• The impact on neonatal and infant mortality.

“The issue of indoor air pollution is a multi-faceted issue,” Mejia says. “It’s not simply an issue you should care about because of the health issues but also because it’s connected to so many other things, such as economic status, general social status in terms of land property rights, female empowerment. It’s a public health issue but also a social rights issue.” 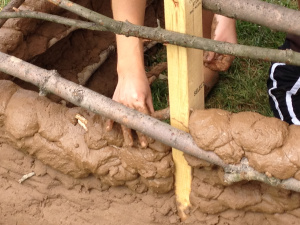 A mud adhesive forms the walls of the hut. Photo courtesy of Breena Holland 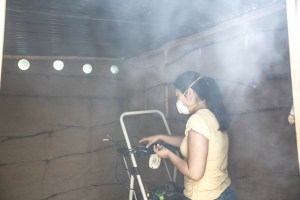 Students test the air quality while cooking inside the hut. Photo by Christa Neu 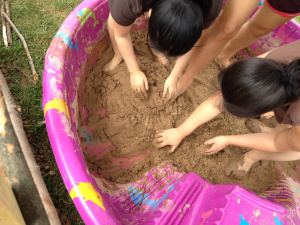 Students use their feet to mix clay, sand, water and sawdust to make the mud adhesive for the hut. Photo courtesy of Breena Holland 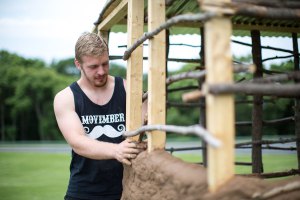 Dylan Friedgen-Veitch adds to the wall of the cooking hut. Photo by Christa Neu 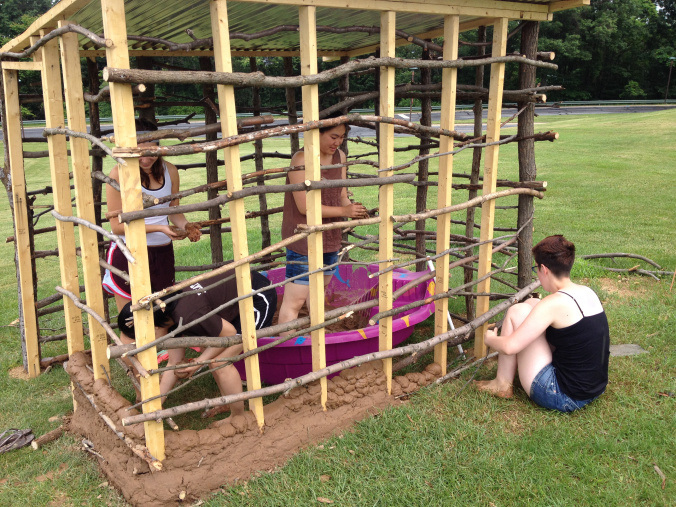 Marie Theresa Mejia, Kellyn M. McCarthy, Yiliqi, and Amber Shrum slowly apply the mud to build the walls of the hut, a replica of a cooking hut found in Uganda. Photo courtesy of Breena Holland 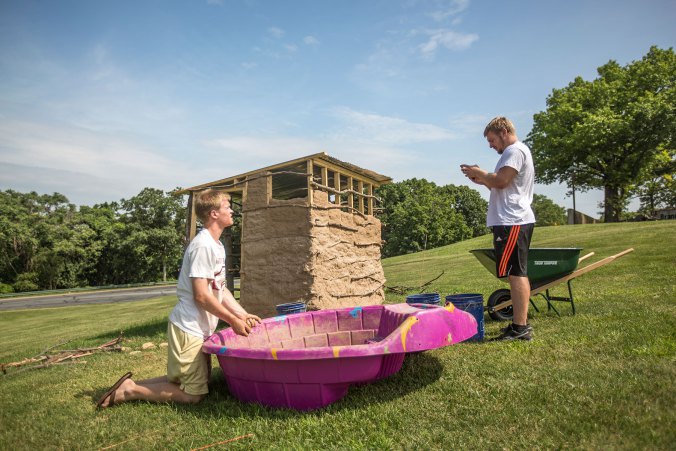 From left, Shane McDevitt and and Dylan Friedgen-Veitch work on the hut. Photo by Christa Neu