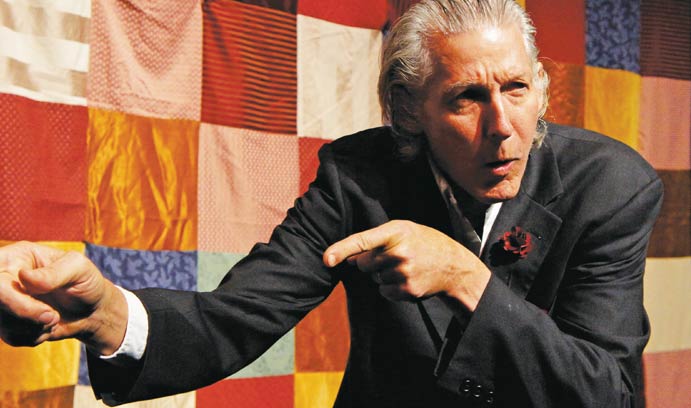 “Photographs,” says Bill George '73, “can show us the relationships between things and the greater whole.

Bill George ’73 surveys a laptop photograph of the Star of Bethlehem, the South Mountain sign that sends him mixed signals. The comforting beacon, he says, once guided him home after a long, misguided night ride. Up close, however, the star “is just a bunch of light bulbs on a rickety frame. In a way, that may be what we are: a bunch of light bulbs, trying to be special.”

“Old Man Dancing” continued George’s quest to map his identity through the South Side’s identities. At Lehigh, he tested his personality within a crucible of machine shops, Gothic churches, steeples, blast furnaces, side streets named for obscure U.S. presidents and a United Nations of ethnic tribes.

His appreciation for the area increased as he and his wife, Bridget, raised two children in a Fifth Street row home while running Touchstone Theatre, which the couple founded in 1981.

“Old Man Dancing” was shepherded by two of George’s Lehigh soul brothers: Augustine Ripa, professor of theatre, and Ricardo Viera, curator of the university art galleries. Viera asked George to create a performance inspired by 56 photos of South Bethlehem history that Viera picked from the Lehigh teaching collection to celebrate the university’s Sesquicentennial. The exhibit, “Revisiting South Bethlehem,” runs through May 27, 2016 in the DuBois Gallery of Maginnes Hall.

George researched “Old Man Dancing” by showing photos to a wide range of citizens to get a wider range of opinions. Rick Cantelmi, patriarch of a family hardware store on Fourth Street, recalled the defunct Bethlehem Farmers Market as a cultural beehive. He also evaluated the merits of a saw in a hardware-store window that was photographed during the Depression.

“Photographs,” says George, “can show us the relationships between things and the greater whole. Photos are instants, grains of sand. What I’m asking is, ‘What can you learn about the desert from a grain of sand?’”