One group’s trash is another’s compost 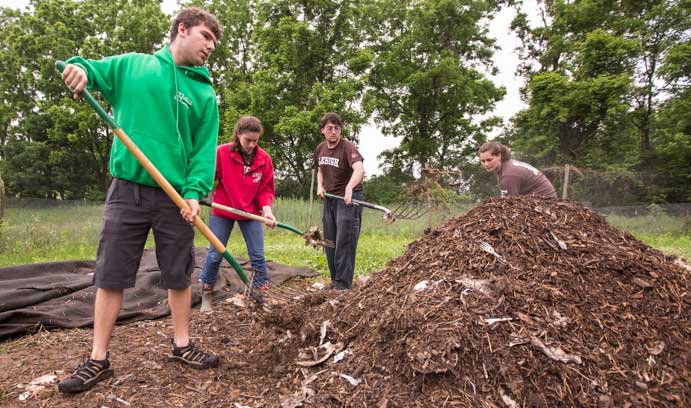 The students arrive, as they do every morning, toting blue buckets filled with scraps of food from Lehigh’s Brodhead Student Restaurant.

Pitchforks in hand, they turn the compost pile at the edge of Lehigh’s Community Garden and add the new waste: fries, grilled cheese sandwiches, spaghetti and other leftovers as well as bits of food discarded while preparing meals.

A couple of rodents scurry out of the pungent pile, but the students are unfazed as they complete their work. They aerate the mound, take temperature readings and add wood chips to balance carbon and nitrogen ratios. On this day, with rain in the forecast, they’ll hold off on hosing things down so as to not make the pile too moist.

This is the GR2OW project, one of the multiple initiatives based at Mountaintop that are under way this summer. The group acronym, conceived by the four students on the team, stands for the Green Resource Recovery of Waste. And that’s just what the group aims to do–turn all of Lehigh’s food waste into compost that can be used to fertilize greenery and other plant beds on campus, and then grow food to serve in campus dining halls.

“It’s not that far out of reach, and it’s definitely not without precedent,” said Alec Entress’ 16, one of the students on the team.

But establishing a composting facility at Lehigh, and closing the food loop, is a long-term goal, one that the students know will require buy-in from other students, faculty and staff.  The short-term goal is more easily attained—resuming composting on campus, at the Lehigh Community Garden on the Goodman campus, with the rich material being used to fertilize fruits and vegetables grown there.

“By necessity, this has to continue,” said Entress, about efforts to design and implement an on-campus composting system for getting rid of Lehigh’s food waste.

Joining him in the endeavor are Aly Lang ’16, Tori Wiedorn ’17 and Ben Cicchillo ’17. All are pursuing an Integrated Degree in Engineering, Arts and Sciences (IDEAS).

Driven both by personal goals and environmental concerns, the students are building on previous student projects conducted by Environmental Science and IDEAS students. They are studying other composting systems, working closely with Facilities Services and trying to develop new technology to help with monitoring the health of their composting pile.

“Part of it is the wow factor,” said Entress. “We want to see what we can come up with, what we are capable of. So part of it is a personal test.”

Food waste has become a national concern. Americans threw out more than 36 million tons of food in 2012 alone, with only 5 percent diverted from landfills and incinerators for composting, according to the Environmental Protection Agency.  Food will rot in landfills and become a source of methane, a potent greenhouse gas with more global warming potential than carbon dioxide, the EPA said.That is not lost on the GR2OW group.

Wiedorn talks passionately about “how much better we could make Lehigh by doing something so simple as composting.”

Last semester Entress helped collect data on the amount of food thrown out at Rathbone, the university’s largest dining hall. On average, he said, it amounted to 200 pounds each day. It is believed to be higher in the fall as incoming freshman adjust to the all-you-can-eat buffets, he said.

As part of their work this summer in the Mountaintop initiative, the GR2OW group collects about 100 pounds of food scraps and leftovers each week from Brodhead Student Restaurant and Entress’ own kitchen, as well as coffee grounds from Saxbys Coffee in south Bethlehem. Then they haul it by the bucket in their cars to the compost pile at the Lehigh Community Garden.

The students take temperature readings by hand and visually check the moisture level of the compost pile. They are working on a prototype to remotely gauge what is happening,  a sensor they call SUSAN.  They also are examining the potential economic benefit of on-site composting to make it more of a sell.

Cicchillo said he’s come to realize there’s a lot he can do to help the environment. “I can be a lot more aware of what I’m throwing out, what I’m using,” he said.

The federal government last year launched the Food Waste Challenge, calling on businesses, communities and other government agencies to cut down on the amount of food going to landfills. Lehigh University, which has developed a sustainability plan, participates in that challenge, said Delicia Nahman, the university’s sustainability officer.

As part of Lehigh’s efforts, Dining Services donated 470 pounds of food last year in a collection drive, said Nahman. The university also has rid its dining halls of food trays so that students won’t pile up food that they likely won’t eat and will toss. Also, Rathbone’s food waste is treated to reduce volume, and it’s sent to an off-campus farm for composting.  Last year 46 tons of food waste was composted.

Nahman, who meets regularly with the GR2OW team, said the university is serious about considering on-site composting as a piece of the puzzle. “She got us pretty psyched to be working on this project and is going to help us set up a meeting with some important people to slingshot our project into orbit,” Lang wrote on the group’s blog.

The students divvy up duties to take advantage of their skills. Wiedorn, who is pursuing environmental engineering, examines state regulations for permitting requirements. Lang and Cicchillo, who are studying computer engineering, are working on sensor prototypes.  Entress is looking at the big picture.

The students, as a group, continually look at “the what, how and why” of any of their ideas.  “Why are we doing this?” said Lang. “We still go back to that.”

“We want to do good things at Lehigh,” said Entress, summing up. “We want to leave it better than we found it.” 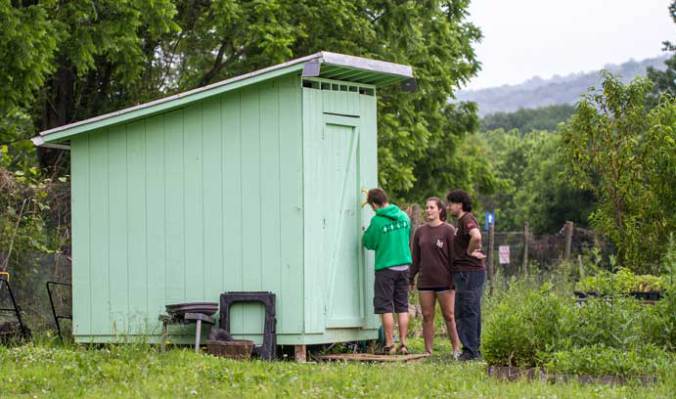 The GR2OW team grabs tools to turn the compost pile. 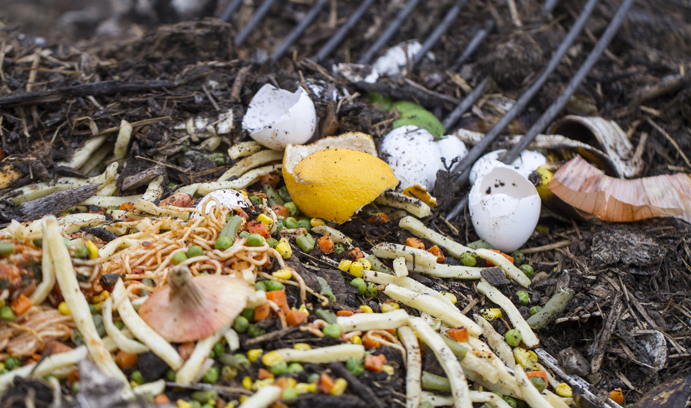 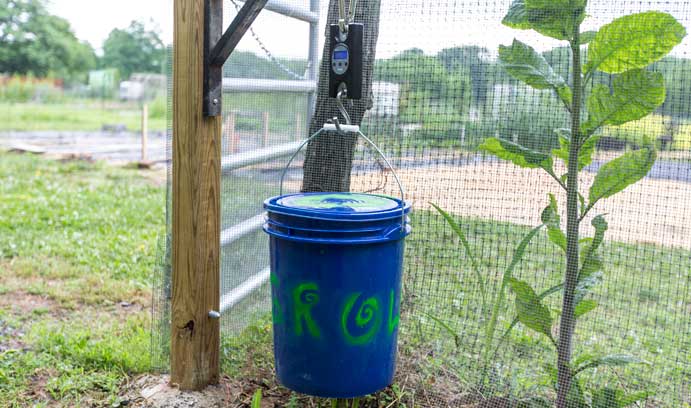 The group weighs the food waste it has collected.