The pieces on the Asa Packer campus in Lehigh University Art Galleries’ outdoor sculpture collection have been added to the interactive campus map.

Step outside Lehigh’s Alumni Memorial Building and onto Leadership Plaza, and you’re greeted by a bronze statue of Asa Packer with his walking stick and hat. It’s not just a nod to the university’s founder, it’s one of over 50 outdoor sculptures in the collection of the Lehigh University Art Galleries (LUAG) spread across Lehigh’s three campuses.

Packer’s statue, created by Czech Republic native Karel Mikolas, is also one of many that can take visitors on an international artistic journey—even without leaving the Alumni Memorial Walkway.

The collection’s sole kinetic piece—“Three Rings,” a steel sculpture by Israeli artist Ephraim Peleg—is among those that can be found on the Mountaintop campus. On the Goodman campus, the bronze “Par What?” by American artist J. Seward Johnson, featuring two men golfing, complements the nearby athletic fields and Mulvihill Golf Learning Center.

“I think the great power of these outdoor sculptures that are so nicely integrated across Lehigh's three campuses is that there really is an opportunity for us to slow down and to look at something carefully, and to notice things that maybe we didn't notice before,” says LUAG Director William Crow.

A lifelong museum-goer who has dedicated his career to art, Crow says he’s sometimes guilty too of not slowing down enough to look at something closely.

“Maybe, as we all return to our physical lives [after the pandemic], it'll be a real chance for people to not only reconnect with art, but to reconnect with themselves, and hopefully others through these experiences,” he says.

Many of the sculptures in LUAG’s outdoor collection were re-sited on campus nearly 20 years ago, in part to make them more visible and accessible to both the campus and local communities. Now, in another step toward making the pieces easier to access and enjoy, the university has added thumbnail images and descriptions of each sculpture on the Asa Packer campus to Lehigh’s interactive campus map.

Mark Wonsidler, curator of exhibitions and collections, noted college campuses with elaborate outdoor sculpture collections are not very common. And the way that works of art are integrated in daily life at Lehigh, he says, provides members of the Lehigh community with an opportunity to immerse themselves in the art. 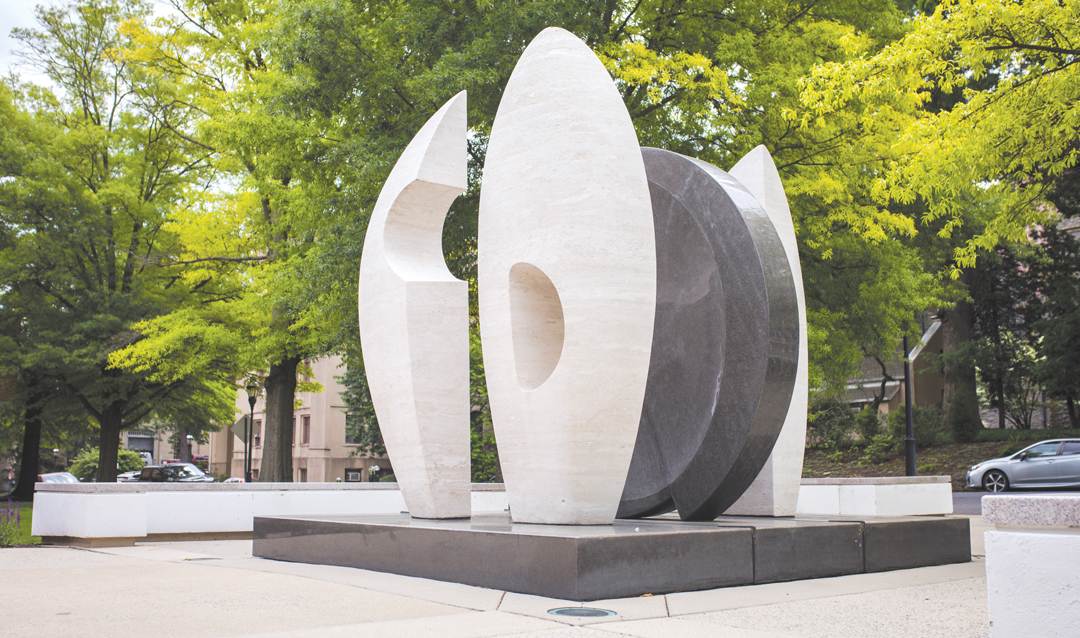 “There's art all over campus—there are seven galleries located in academic buildings, you're moving to and from throughout the day,” Wonsidler says. You see them on your way to class, or on your way to lunch, for example. You have a lot of opportunities to pass works of art or experience works of art.

“What's rare about it is, the opportunity to live with these things. I hear so many anecdotal stories from students, sometimes totally mythic and apocryphal stories that they have heard or created about works of art on campus. The more outlandish they are, the more I'm excited about them because it means the works are alive in their imaginations in some kind of student folklore. That doesn't happen unless these things are on the edge of your consciousness in some kind of way.”

LUAG’s effort in 2002 to re-site its outdoor art collection began with the late Ricardo Viera, former LUAG director. In 2002, one of Viera’s classes included developing a suggested plan for the initiative. Stacie Brennan ’03, inaugural curator of education at LUAG, was in that class.

“Part of the class was to embrace [the sculptures] as part of the campus culture and environment and move them into places they had not been, especially along the Memorial Walkway,” Brennan says. Visual interest, size and necessary maintenance, she says, were all taken into consideration on where to site them.

“It’s very direct,” says Wonsidler about the outdoor collection. “It's not filtered through a museum context where people feel like they're walking into a…temple or an authoritative space. They're just hanging out on campus.”

When Crow joined Lehigh in 2018, one of his priorities was to digitize the more than 17,000 pieces of art in LUAG’s collection. After working with the College of Arts and Sciences’ web team, LUAG launched a fully redesigned website in 2019 to host the works online. A federal grant from the Institute of Museum and Library Services that LUAG received last year also has aided in the process.

“Having digital public-facing images of the collection is really critical because our collection at Lehigh is fantastic,” Crow says, “but it can remain remarkably invisible unless people are able to find it and search it online, whether that's a researcher, or a scholar, or someone who is just an art enthusiast who lives down the street who really wants to know what we have in our collection.”

Digitizing the collection has helped the idea of a digital map, which Crow acknowledges the team has desired for years, become a reality.

“Our aim at the art galleries is really to maximize the public value of this collection,” Crow says. “The only way we can do it is for it to be present, whether it's physically present or digitally present, or even confronting people in their walk from one campus building to another. As a museum, of course, we're quite invested in the physical object and physical spaces, but we also see all of these projects as underscoring that experiences with art can be a state of mind that can happen anywhere. And it doesn't necessarily have to be tied to a physical gallery or a specific space on campus.”

The pandemic and the increased appetite for outdoor activities also helped push the digital map overlay project forward, especially since Lehigh already offered an interactive campus map. People will be more likely to use a tool, Crow says, if it’s integrated with something they already use.

We can step in someone else's shoes and try to understand how they are experiencing something, and I think we're living in a moment right now where that is, of course, critical for all of us to have those opportunities.

Along with brief descriptions of the sculptures on the campus map, 23 of the works will feature links to student-produced videos, two to three minutes in length that explore the art. For those viewing the art in person, QR codes will be available to scan, directing users to the videos.

While some of the videos were produced by art or art history majors, Crow, professor of practice of art, architecture and design, says most were made by those not studying art, allowing for different perspectives. They include science, engineering, history and international relations majors.

“It's really an opportunity to see the sculptures through the eyes of someone else,” Crow says. “I think that is quite central to understanding the transformative power of works of art, which is that they help us understand others’ perspectives. We can step in someone else's shoes and try to understand how they are experiencing something, and I think we're living in a moment right now where that is, of course, critical for all of us to have those opportunities.”

The videos help showcase the variety of the art in the collection, some of which blend into their surroundings, such as George Segal’s “Woman on Park Bench.” Sara Jewel ’23 provides an in-depth assessment of the piece, which she says “camouflages itself seamlessly into the [Memorial] Walkway,” in her video. She describes the sculpture as “entirely white, based on the look of hardened molded plaster and is affixed to her bench, which is part of the sculpture itself. She looks down at her feet and is holding on to her shoulder bag which rests on the bench as well.”

Other works, such as Karyn Olivier's "Have a Seat,” encourage interaction. Rachel Yiran Liu ’22 focused on the sculpture, located outside Fairchild-Martindale Library, which is made from cinder block, stone, steel and power-coated steel. “As you walk around the piece, multiple square shaped holes can be found on its volume,” Liu says in the video. “While audiences can interact with the piece by glancing [at] the world through little holes from a different perspective, they can also observe each other… and this way, Olivier intends to present monuments as conductors that will transport and reflect the landscape [and] people in activity surrounding it.” 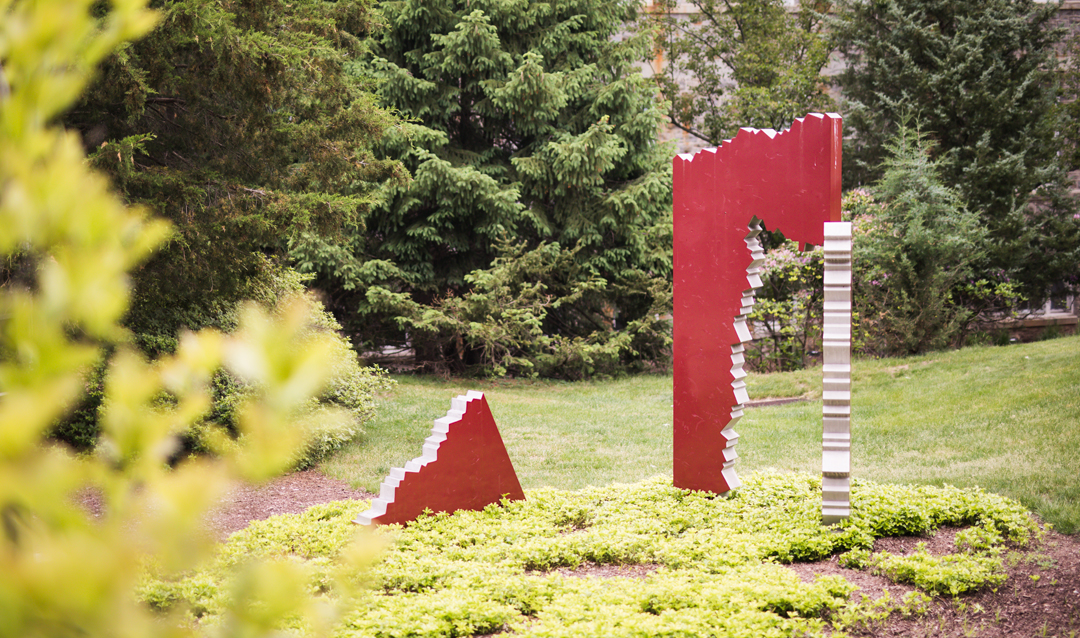 'From Fractured Series,' a pained aluminum sculpture by Paul Sisko, is on display outside of Lewis Lab. 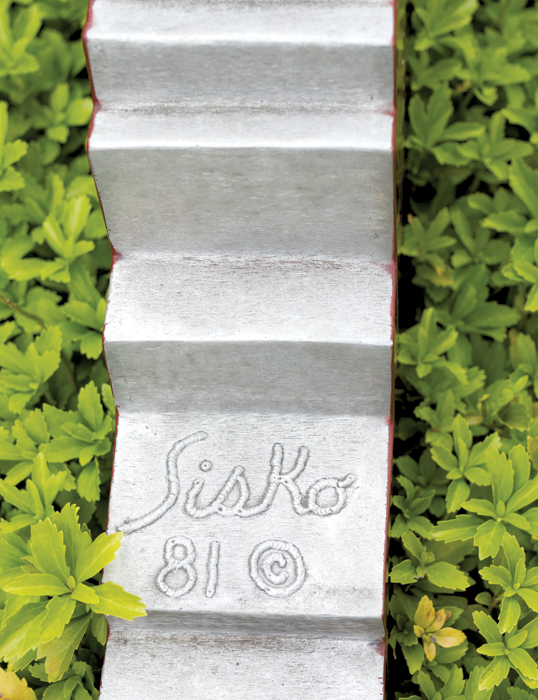 Paul Sisko's signature on his 'From Fractured Series,' which is situated outside of Lewis Lab. 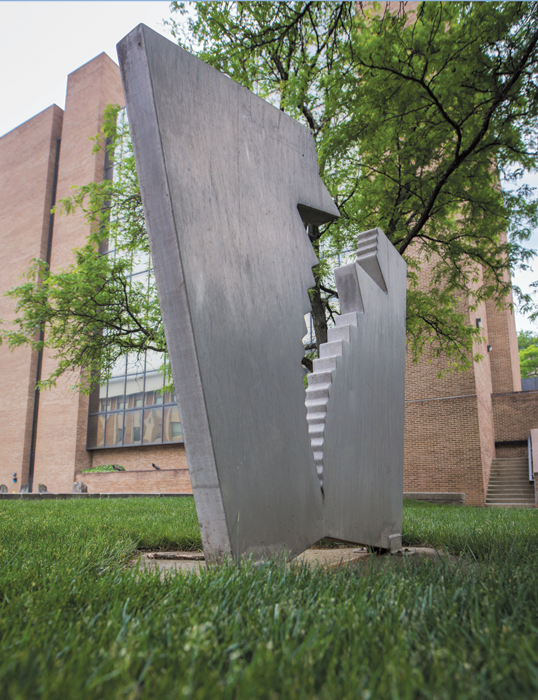 Paul Sisko's 'Torn Rectangle' has been on Lehigh's campus since 1980. 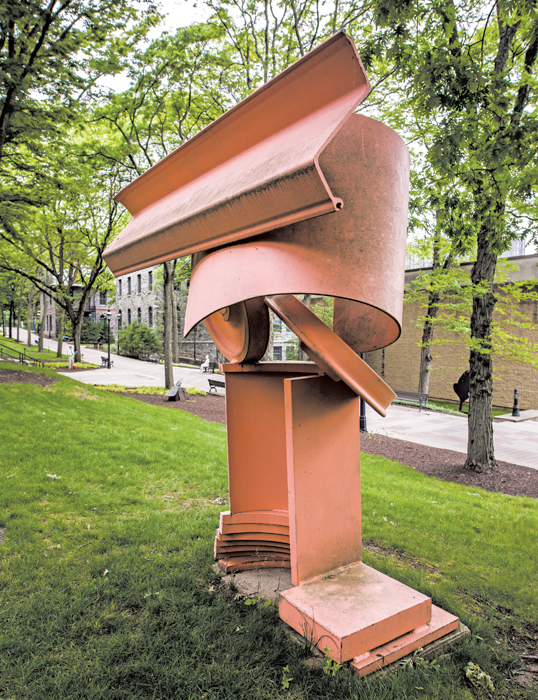 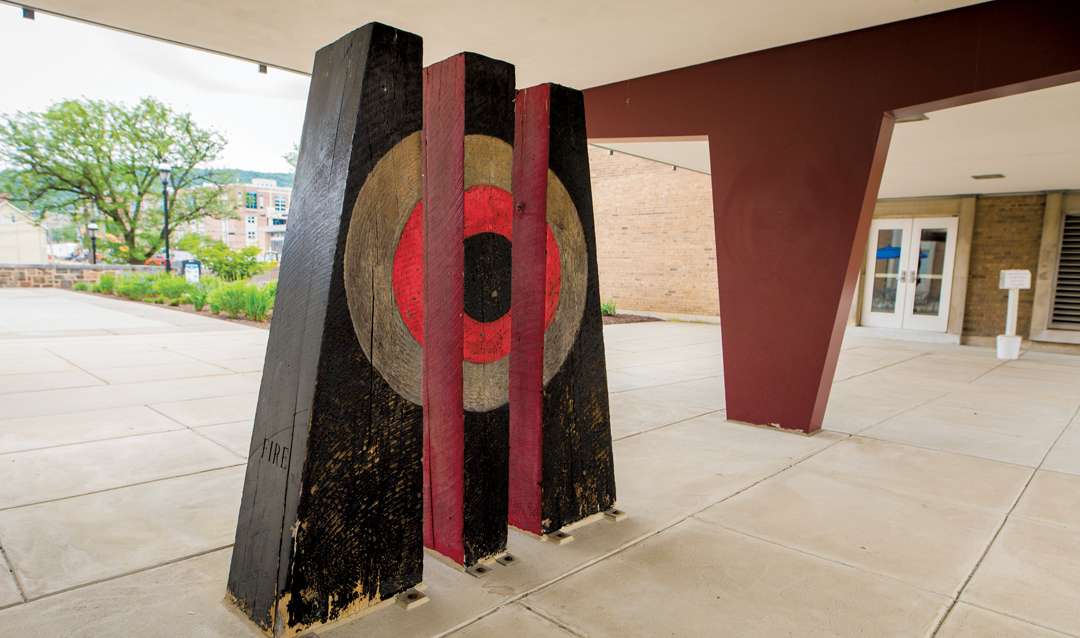 Former Lehigh Trustee Nancy Berman, whose parents Philip and Muriel Berman gifted the majority of the outdoor sculptures to Lehigh, says she values the idea of sharing information and context for the sculptures that students, faculty and staff encounter on Lehigh’s grounds.

“For some, just noticing and enjoying the art work is enough,” she says. “Others are curious to know more about the artist and or how the work was made, and perhaps suggestions of ways to think about the art.”

Berman describes the student-produced videos on the sculptures “very inventive and creative” in how the students interact with the sculptures themselves. “It shows how personal and unique a response to the call of art can be,” she says.

Lehigh’s outdoor collection also has been utilized in the classroom.

Crow’s Museum Studies class in Fall 2020 created the videos that are being used for the campus map overlay, but professors in disciplines other than the arts have used the sculptures as well. Christina Viau Haden, professor of practice in mechanical engineering, working with Brennan, incorporated “Three Discs,” a sculpture by Menashe Kadishman on the Mountaintop campus, into her Spring 2020 class. LUAG had the mechanical drawings for the sculpture within its collection files, allowing Haden to add a question about the piece on her final exam.

Brennan says students were asked to investigate the structural elements and ratios of the sculpture above and below the surface and make suggestions for future maintenance. Not only did the question provide a real life example for the students, she says, it also aided LUAG in planning for care of the sculpture.

“That was a really nice collaboration and a pilot into how we really could use the sculptures for various classes, research and study,” Brennan says.

Professor Anna Chupa’s Digital Photography I class featured class projects in which students photographed the sculptures. Brennan says they'd like to continue similar collaborations with professors and classes, and not just the sculptures but with the entire collection.

This summer LUAG is partnering with the Bethlehem Area School District in hopes of integrating some of the outdoor sculpture collection in their curriculum, while also providing summer visits and tours. Brennan says they also want to connect with the urban arts trail in the SouthSide Arts District.

“There's a growing public arts scene in the South Side,” Brennan says. “We want [the sculptures] to be available to the community and to serve as a resource for inspiration and connection.” 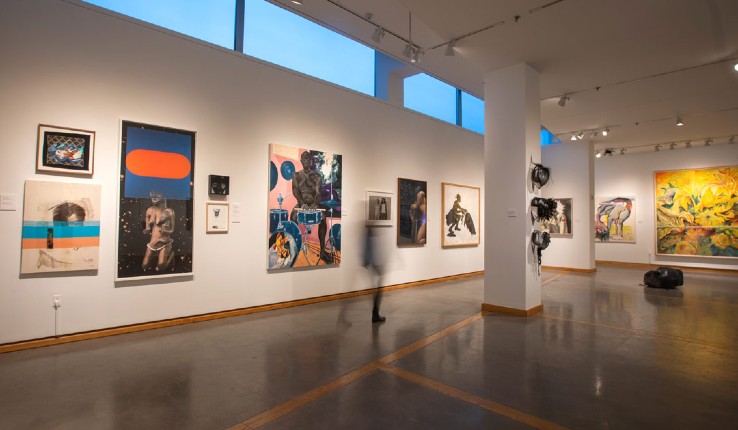 The works will be on display through May 27 in the LUAG Main Gallery in Zoellner Arts Center. 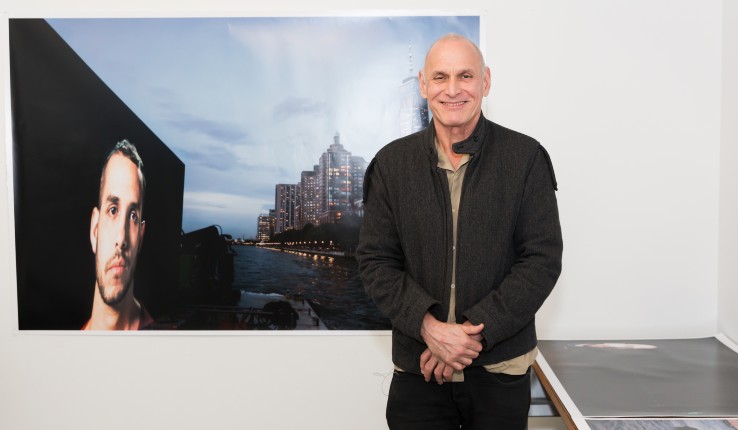 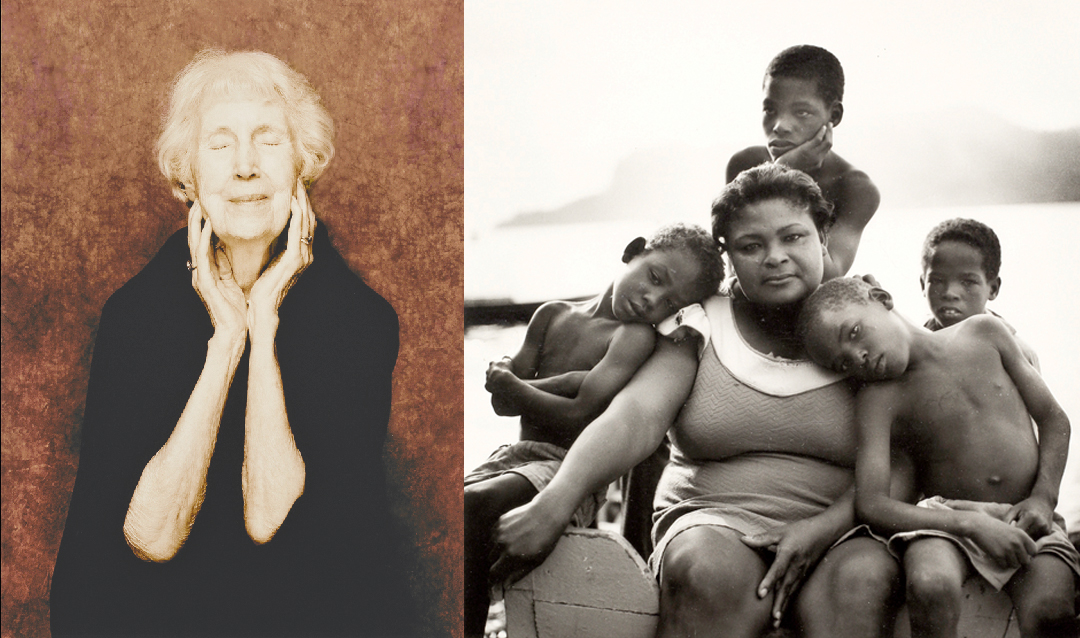 The exhibition coincides with the university celebrating 50 years of undergraduate women at Lehigh.