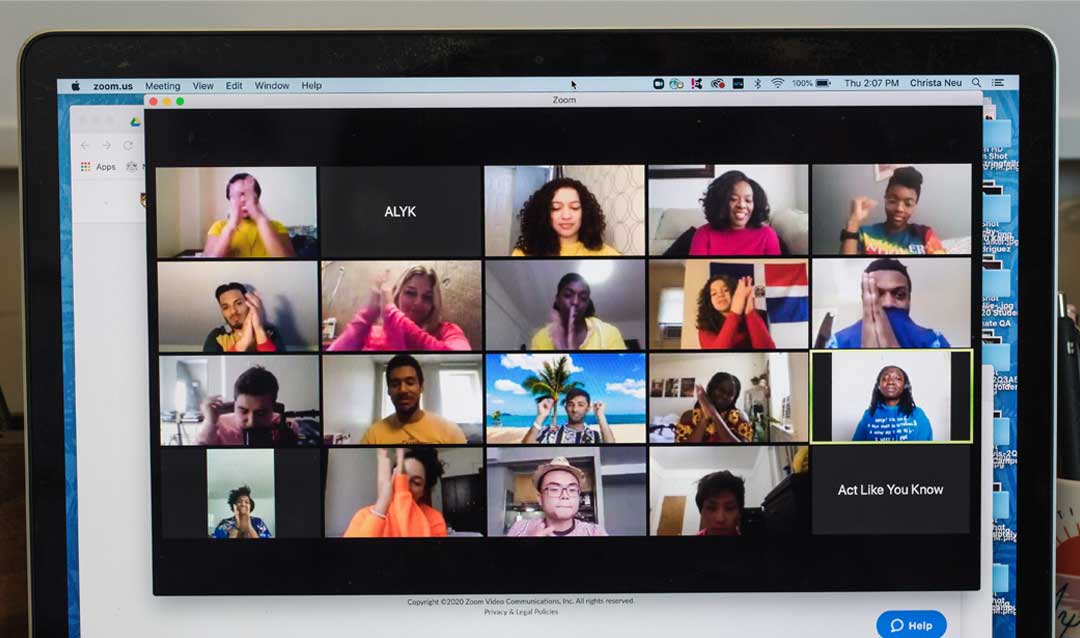 Kashi Johnson’s hip hop theatre class “Act Like You Know” met over Zoom as they prepared for a film of their original work.

Lehigh faculty take their online offerings to the next level to inspire learning.

When COVID-19 forced Lehigh to shift to online learning in the spring semester, faculty rose to the challenge.

Now, they say, they’ll build on best practices, should the pandemic prompt Lehigh to continue with remote learning in the fall, with the goal of developing and implementing new strategies to deliver a next-level online experience.

“What we’ve been doing is encouraging those faculty who are already being really creative—the ones who are out there doing all kinds of interesting stuff with their courses—to just keep going,” says Lehigh Provost Patrick V. Farrell “At the same time, we want those same faculty to let their colleagues know what they’re doing, because they are going to want to put those ideas to use, too.”

The creativity of Lehigh faculty cut across all disciplines, and included innovative work even in classes for which remote instruction may have seemed difficult.

In a first for one of Lehigh’s most popular courses, for example, the students in Kashi Johnson’s hip hop theatre class “Act Like You Know” created a film of their original work, rather than close out the semester, as they usually do, with a live theatre performance. The film debuted Sunday, May 3, on YouTube, in a live viewing party that had students, staff, faculty and alumni cheering the cast in comment streams.

The film featured the students’ original work and quarantine-inspired rhymes, dances, spoken word poetry, skits and lip syncs. Johnson, chair and professor of theatre at Lehigh, said that while she had always enjoyed engaging her students on social media platforms, she would not have otherwise used a platform like Zoom for performance coaching.

“The mandate and the urgency of now has just made it … this is what we're doing, and you will adapt and figure out a way to make it work. And I appreciate that push because I never would have wanted to before,” Johnson said. “My art form deals in the actual interpersonal interaction. That is at the heart of theater. It's live.

“To not be live takes away the very heart of why I love it so much.” But, she continued, “It's also a very creative art form. It inspires innovation. It inspires new ways of thinking and doing things too.”

Johnson used Zoom technology to have the students rehearse and produce and write their own pieces, just as they would have in face-to-face meetings on campus. And she coached them, via Zoom, in the spoken word and led them in stretches and artistic check-ins. There were some skits that the class had been worked, rehearsed and recorded prior to Lehigh going remote. “And then when we came back after spring break, I realized that the gift of our class has always been to speak truth,” Johnson said. “We deal with the authenticity of now.”

Johnson, who has a hands-on teaching style, acknowledged that it probably took a few weeks for her to get into a teaching rhythm with her students, to the point that she was able to ignore the screen, connect with her students and overcome the barriers of being in different places.

“I tried to build in as much normalcy as possible into our semester,” she said. “I maintained the same Zoom classroom for the duration of the semester. The room served as the physical theater where I would coach student performances, and my virtual office where I held office hours. This continuity was very successful. Sometimes, I would drop by the classroom for an impromptu meeting, only to find some of my students already there working on another project or hanging out--just like it would be in Zoellner's Black Box theater.”

Johnson developed protocols that made acting coaching easier for remote instruction. For example, instead of allowing students to sit down when they rehearsed, she asked them to stand and find ways to raise their laptop or phone to eye level. That simple adjustment enabled students to stand and perform with confidence, she said, and in standing, they were able to fully engage their body and voice in the act of performing.

In the midst of the pandemic, with many students finishing their senior years at Lehigh via Zoom and some feeling isolated, she said, “there's real truth to tell. There are real stories to convey.”

Johnson said other faculty in the department were innovative in their teaching as they moved to the online format. In a props course, for example, there was a shift to having students find items around their home to use to create and make props.

“So the reinvention of the wheel is real and ongoing, but theater is like that,” Johnson said “We are used to challenges.”

Amy Forsyth, associate professor of art, architecture and design, quickly figured out how to adjust the plans for her furniture design course to have the students design and build cabinets.

Her original idea was to have the students build the cabinets as practical storage pieces, but also art pieces. She says the students were to think about how cabinets open and close, make hinges and sculpted doors and maybe paint them. First, Forsyth posted videos of herself showing and describing cabinets she has made herself to aid students. 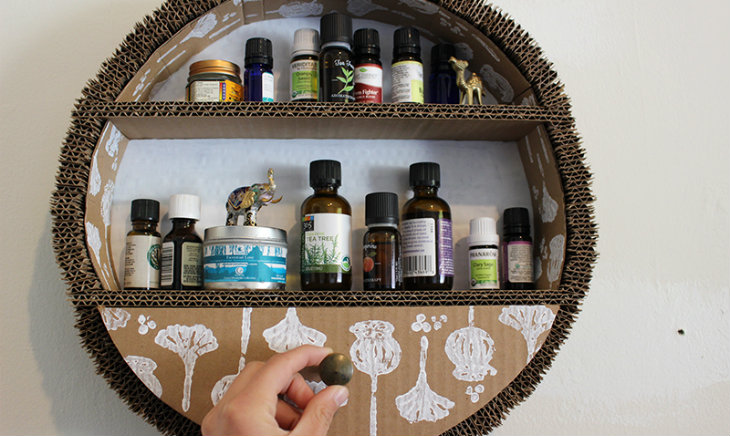 Clare Ternes '20 made a cabinet to hold essential oils.

Since students already had a kit of tools, which included an olfa knife (Forsyth describes it as similar to a matte knife), and access to cardboard boxes from home shopping, Forsyth came up with the idea to have her students build the cabinets out of cardboard instead of wood, since they would not have access to a woodshop.

“Anytime you design and make something out of anything, you learn about the design process and what kinds of ideas you can incorporate,” Forsyth says. “If you take a piece of cardboard and you cut it up in a certain way, you can make a whole series of little boxes. They can assemble, be held together in a certain way. …You can investigate the material in a lot of different ways.”

“It's not ideal,” Forsyth says, “but I think they still learned a lot.”

While most of the students constructed the cabinets out of cardboard, two students had access to a woodshop at home and proceeded with wood. Another student chose to design his project in Fusion, a computer program Forsyth says lets them “lay out all the parts.” She said that the student plans to assemble the cabinet when campus reopens. In addition, she had students assess each other’s work.

Forsyth also made adjustments concerning the course’s scheduled field trip. Each semester, after teaching basic wood-carving skills, she takes the class to the Wharton Esherick Museum, in Tredyffrin Township, Pa. The museum, which was Esherick’s home and studio, also features a property on the site that Esherick worked to build with architect Louis Kahn. The students tour the buildings, Esherick’s workspace and handle the sculptures to feel the marks of the tools on the wood.

From there, Forsyth, who lives nearby, invites the students back to her home where she feeds them chili and shares the many pieces scattered throughout her home that she has created.

Instead of an on-site visit, Forsyth set up the next best thing—a virtual tour. She asked the director of the museum to do a virtual walkthrough for her students. While Forsyth made those arrangements, she uploaded photos she took over the years at the museum to Course Site for the students.

Overall, Forsyth says, the students were extremely receptive to the changes.

“Their responses were good,” Forsyth says. “I had one assignment to make a drawing of a couple things and everybody was on it right away. I think they were really anxious to have things to do right [away] and to feel like their lives were somewhat normal even though they were completely not.”

‘We Care About Them’

Edward Whitley, professor of English, has been teaching online summer courses since his arrival at Lehigh 15 years ago. His experience helped him transition fairly easily this semester, but, he says, he still learned some things that he plans to carry forward.

He’d already practiced “breaking things into chunks” in an online course—not just the assignments, but the classroom experience, as well.

“Breaking up the classroom experience into smaller groups of students for shorter periods of time, you get more out of that. It’s not the same as the standard Lehigh experience of a small class meeting for an hour and a half, twice a week, but I think it's showing how our faculty can be thoughtful and innovative in recovering as much of that as they can and retooling as necessary.”

Whitley says there are some benefits to the online experience. Students in the online course did more writing because he’d broken assignments up into pieces and checked in with them daily rather than twice a week.

“For an English teacher, that's a huge benefit. I think you could say that for any discipline. ...There are some benefits that we can get out of this, some pluses that outweigh some of the considerable negatives.”

In this first-year writing course, Whitley has always had students give end-of-semester presentations. This year, he says, was no different—although the end results were even more powerful.

“I thought about scrapping the assignment entirely and coming up with something different,” he says. “But then I did some research, finding ways that they could still do a PowerPoint presentation and embed an audio or a video track. Within that...is a skill that they could take to all kinds of different settings, given how connected the world is and how our Lehigh students are always working in fields that regularly have international components.”

Students learned how to maximize the technology on PowerPoint, Whitley says, advancing from simply making a set of slides to talk through in class to having to create a precise presentation, record an audio track, package it up and send it off. The assignment forced students to work on skills they wouldn’t have had to otherwise, and Whitley intends to continue to assign it even when in-person courses resume.

“This is something that they may have to do for clients down the road if they're pitching [an idea] if they, like many Lehigh students, become entrepreneurs. This is the kind of thing that they could make. ... In these class presentations they've done in the past, they could kind of fudge it a little bit, and make up in question and answer the things that they didn't cover, but this really forced them to polish it the first time around,” he says.

Whitley stresses that Lehigh faculty are doing all they can to provide the best possible learning experience for their students.

“We really do love our students,” he says. “Faculty who come to Lehigh and who stay at Lehigh, they want to be involved in the lives of their students. ... So we are going to do everything we can to help support our students because we care about them. That's why we're here.” 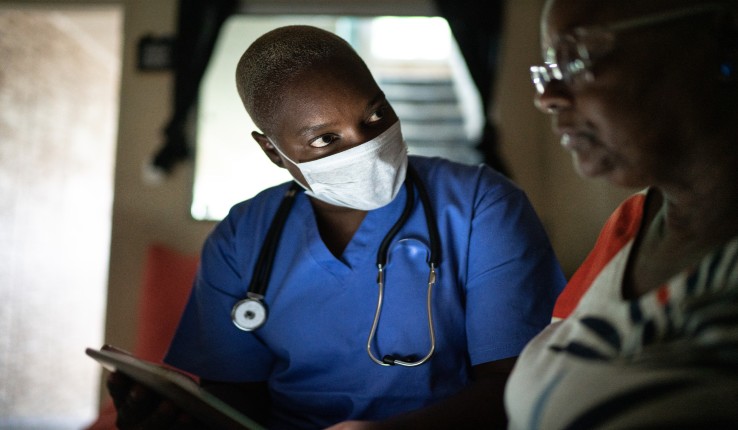 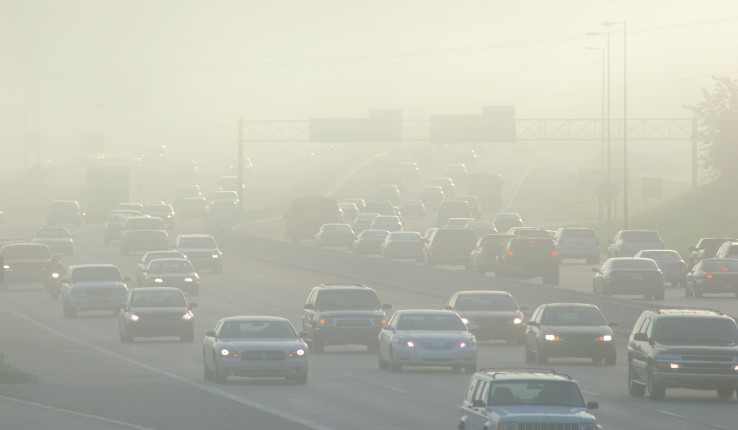 COVID-19: The Impact of Air Pollution

A Q&A with epidemiologist and College of Health faculty member Hyunok Choi.