In pursuit of the deadly tumor cell

When a malignant tumor begins to grow somewhere in the body, it can take time—too much time—before it shows up on magnetic resonance imaging (MRI) or on released biochemical markers in the blood. The increased flow of blood around tumors, which are highly vascularized, makes it likely that some tumor cells will split off into the bloodstream and spread to other areas of the body before they are detected.

Metastatic cancer accounts for nine of every ten deaths from solid tumors, but the survival rate is high if the cancer is detected early. But what if a simple test could identify circulating tumor cells (CTCs) and alert physicians to the presence of the cancer before a mass shows up on a scan or before symptoms present?

A team led by Yaling Liu, associate professor of mechanical engineering and mechanics and also of bioengineering, has developed a promising technique for isolating the handful of CTCs that might be circulating among billions of normal blood cells in a single milliliter of blood. With a three-year grant from NSF, Liu and his collaborators are designing and testing a tiny “lab-on-a-chip” device that could make screening for CTCs part of a normal blood test.

“Early cancer detection has become a major focus of translational cancer research,” Liu says. And with good reason: The big C is the second-leading cause of death in the U.S., claiming more than 575,000 lives each year, almost as many as cardiovascular disease and four times more than lower respiratory disease, the third affliction on the list.

Many cancers are survivable if caught in time, but the Centers for Disease Control and Prevention says that nearly half of colorectal and cervical cancers and one in three cases of breast cancer go undetected until they are at an advanced stage.

CTCs could play a critical role in the quest by researchers to develop new techniques for early cancer detection. Many cancers express unique protein markers, such as CA 15-3, which indicates breast cancer, or prostate specific antigen (PSA), for which men are screened to detect prostate cancer. But blood contains millions of proteins, making it difficult to detect protein cancer markers. By contrast, blood contains only a few types of cells.

“It is relatively easier to detect a particular cell type,” says Liu, “and the results are more stable, too.”

A lab-on-a-chip performs tests on a microfluidic device smaller than a few square centimeters using as little as a few milliliters of fluid. Liu’s rectangular chip, made of the polymer PDMS, is about the length of two quarter coins. Its key feature is a tiny flow channel based on a hierarchically designed pad that is optimized to capture tumor cells from the blood flowing across it.

“Cells have protruding patterns,” says Liu. “We have tried to create patterns on the capture pad that are complementary with the patterns on CTCs.”

The low cost of Liu’s device—“You could build one for ten bucks,” he says—raises the potential that the device could be used for home tests or deployed in the developing world.

A focus on cell size and features

To achieve those two goals, the group has designed the capture pad to mimic the biological features of the CTCs. Tumor cells have both nano- and microscale features. The cells are 15 to 30 microns in diameter. They bind to other cells—and to optimally designed diagnostic devices—with protrusions called microvilli that are less than 2 microns long, and less than 200 nanometers in diameter.

Using microfluidic design principles, Liu’s group engineered vortices on their device to increase the chance that tumor cells will collide with the surface of the flow channel. The group also arranged ripples in a herringbone pattern lining the bottom of the capture pad.

“The herringbone surface generates a passive vortex that mixes the cells,” he says, “and increases the chance that they will collide with the capture pad. It’s a bio-transport process.” All the cells in a sample are flipped around by the vortices—red and white blood cells as well as tumor cells. Unlike similar devices described in the literature, the Lehigh device avoids sharp corners to prevent unwanted cells from being trapped, opting instead for smooth curves that reduce damage to passing cells.

After cells collide with the capture pad, the goal is to make CTCs adhere while normal blood cells flow past. To accomplish this, the group coats the pad with a layer of anti-epithelial cell adhesion molecules (anti-EpCAM) which bond with CTCs but not with normal cells. The group also attaches arrays of nanopillars to the pad to snag tumor cells and discourage regular cells from attaching. The pillars and herringbone ripples are etched on the bottom of the tiny flow chamber. Blood flows through an inlet, across the microfluidic surface, and out the other end of the device, leaving behind a high percentage of the CTCs and relatively few regular blood cells.

The next challenge, says Liu, was a geometry optimization problem—to find the most effective combination of ripple pattern and pillar dimensions (size and spacing). Shunqiang Wang, a Ph.D. student in Liu’s lab, says the group has tested ripples with wavelengths from 30 to 120 microns and pillars whose diameters range from 120 to 1100 nanometers and whose spacing ranges from sparse to dense.

Wang built a geometry matrix matching capture pads with combinations of ripple amplitude, wavelength, pillar height, size and spacing against the known dimensions of tumor cell size and microvilli to determine which options would achieve the best capture efficiency and selectivity. These prescribed nanopillars candidates were then fabricated using metal-assisted chemical etching in the lab of Liu’s collaborator at the Max Planck Institute in Germany.

The group uses another weapon to isolate CTCs, a process known as “immunoaffinity-based capture.” The tumor cells that form most common cancers, including breast, colorectal and prostate cancers, have a shared signature, says Wang. They express a chemical called EpCAM that acts like a “glue” and binds tumors together. EpCAM can also be cleaved to formulate a complex that binds with DNA and stimulates production of the molecules that promote tumor growth. Because EpCAM is expressed by a range of cancer cells and by some stem and epithelial cells, but not by other cell types, it is a good way to identify CTCs in the blood.

EpCAM molecules seek to bind with anti-EpCAM, an antibody. Other cells have no such affinity and are less likely to be captured, Wang says. Liu’s group coats the surface of the nanopillars with anti-EpCAM. The microvilli of passing CTCs grab the pillars like interlocking fingers, forming a strong bond. Searching for tumor cells that are expressing EpCAM, says Liu, “can be used as a broad spectrum diagnostic device, because it works for a majority of cancers.”

The group has conducted separate tests on each level of its design: the microfluidic flow over the herringbone surface and the capture of CTCs by the antibody-coated nanopillars. As the NSF grant approaches its final year, the group is working with researchers at the University of Pennsylvania to fabricate a hierarchical structure with nanopillars embedded along the herringbone ripples. This hybrid surface, says Liu, is much more complicated to make than the individual components.

A sweet spot, not a tradeoff

Some research groups have developed diagnostic techniques that achieve label-free detection based on the physical properties of the cell, including size, density and deformability, Liu says. Others use magnetic nanoparticles coated with anti-EpCAM to isolate CTCs. Most of these techniques, however, have a “significant tradeoff between capture efficiency and selectivity,” he says. They capture 90 percent or more of the CTCs, but with greatly reduced selectivity. The resulting mixture has so many blood cells that it is difficult to isolate and count the CTCs.

Liu’s results have been encouraging. His group has identified a number of design parameters that can improve the device’s efficiency. They have shown at the microscale that ripples about six times as wide as a target cell’s diameter work best at putting cells in contact with the surface of the capture pad. And they have found that increasing the depth of the ripples in the herringbone pattern improves CTC capture. The most promising device candidates have been fabricated in the lab of Shu Yang, professor of materials science and engineering and of chemical and biomolecular engineering at the University of Pennsylvania.

At the nanoscale, the group has found that, although CTC capture decreases as the diameter of the pillars increases, there is a sweet spot in their spacing. If the pillars are too tightly packed, passing cells glide by as if they were flowing over a bare surface. If the pillars are too spread out, passing cells can be trapped between them, thus increasing nonspecific cell capture. “Spacing a little bit bigger than the diameter of the microvilli seems ideal,” says Wang.

Liu’s group is also working on other microfluidic devices; one project is funded by the National Institutes of Health. They have filed a patent for a biomimetic device that evaluates the efficacy of nanoparticle drug carriers. The tiny particles can be coated with ligands that bind with receptors at disease sites, allowing the manufacture of “nanorockets” that enable a drug to home in on specific disease cells. Liu’s group has studied the shape of the drug molecule, blood flow and the geometry of a patient’s vascular system and how their complex interactions affect drug delivery. They have coated a layer of endothelium cells on a microfluidic device to study how nanoparticles transport and bind in blood vessels. The researchers are working with Particle Sciences, a Bethlehem-based biotech firm, to validate the effectiveness of commercial drug delivery evaluation systems.

Inspiring the next generation

The group has attracted the involvement of younger researchers. When Wang explained the project last year during the Lehigh Valley Science Festival at Coca-Cola Park in Allentown, one teenager listened intently.

“Afterwards,” says Roy Ghosh, who is now a ninth grader at Parkland High School, “I became engrossed in microfluidic devices and cancer cell capture, and I researched many reports to learn about circulating tumor cells and the engineering of these devices.”

The encounter led Ghosh to take an internship in Liu’s lab and explore a possible improvement to the project. Ghosh and Wang developed a model in which blood flows past an inclined wave pattern coated with E-selectin, a protein found on endothelial cells that binds more securely with white blood cells than with CTCs and does not interact with red blood cells. This binding process involves rapid bond formation and breakage kinetics, allowing white blood cells and CTCs both to roll adhesively along the surface but at different velocities. This, Ghosh theorized, would separate white blood cells and CTCs out to different rolling paths while nonadhering red blood cells follow the streamline and flow straight to the outlet.

The result, says Ghosh, would be “more than 90-percent separation efficiency. This creates a novel method for label-free, quick, inexpensive and efficient cancer cell separation and diagnosis.” 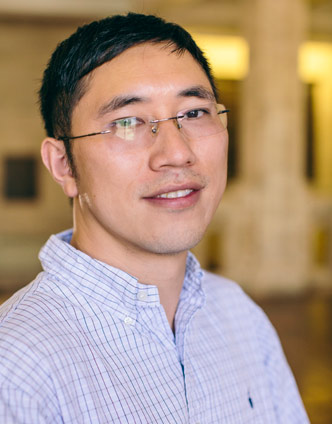 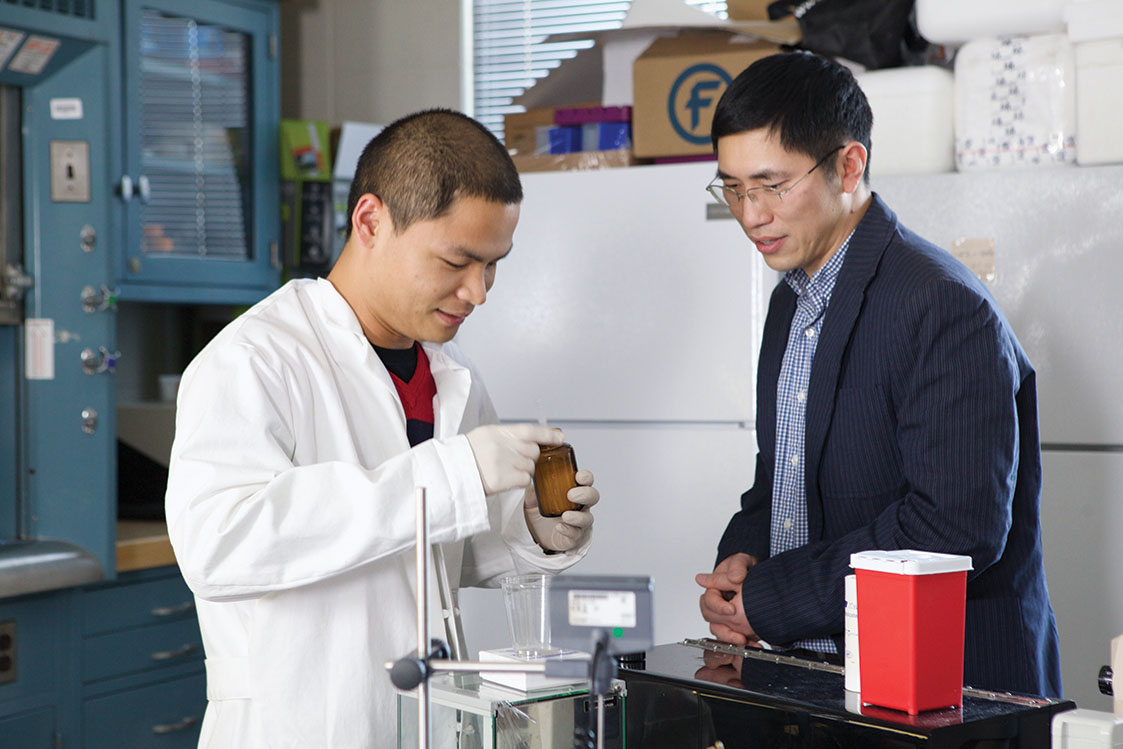 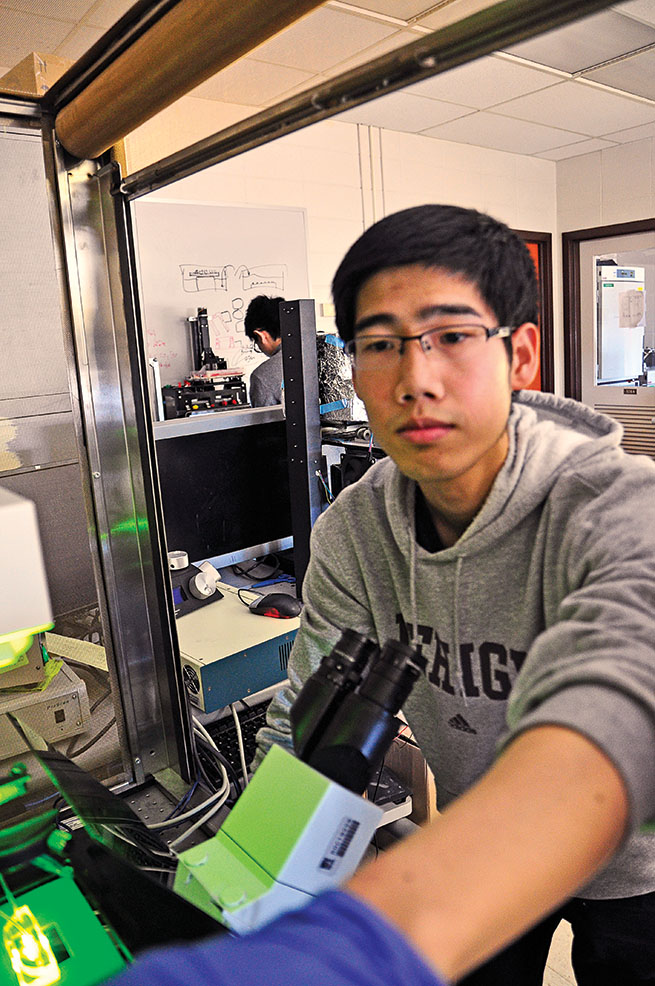 Ph.D. student Shunqiang Wang coats the nanopillars on the capture pad with an antibody that has an affinity with a chemical expressed by tumor cells and forms a strong bond with the cells’ microvilli. (Photo by Vinicius Aguiar ’16)

Researchers advance the art of drug testing
Linda Lowe-Krentz, Yaling Liu and Daniel Ou-Yang receive a grant from the National Institutes of Health to develop a method of testing drugs that selectively kills cancer cells.