Brushless painting on canvas of milk 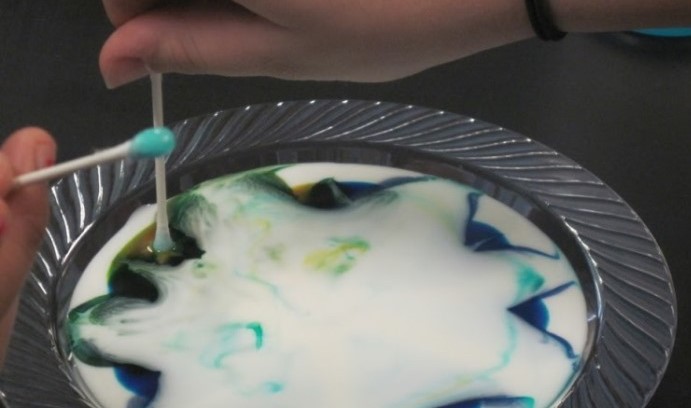 “Painting” in a shallow bowl of milk was one of four activities in the day’s lesson recently when chemical engineering majors taught science class at Broughal Middle School.

What kinds of contributions do chemical engineers make to modern life? And how can young students be encouraged to study the discipline?

The Lehigh students, members of the university’s chapter of the American Institute of Chemical Engineers (AIChE), arrived at Broughal at 7:30 a.m. and stayed until the early afternoon, teaching five classes of students in Lori Cirucci’s eighth-grade science course.

It was the third consecutive year the AIChE members have visited Broughal. As in the previous years, the event was funded by ExxonMobil.

The Lehigh students began each class with a brief discussion. The eighth-graders learned that chemical engineers, among other endeavors, refine gasoline and develop and test new prescription drugs and new ways of processing food.

The remainder of each class consisted of experiments illustrating chemical phenomena. Three were hands-on. Working in small teams, the eighth-graders filled columns with liquids of various densities, such as dish soap, milk, vegetable oil and water, and then dropped metal bolts, plastic beads, ping pong balls and other objects into the mixture. They observed that some objects descended further than others into the “interactive density tower.”

In another project, the eighth-graders learned about polymers by mixing borax powder with Elmer’s glue and then adding iron filings to form a magnetic slime. In a third project, the Broughal students painted without a brush by preparing a “canvas” of milk with carefully placed drops of various dyes and then dabbing it with dish soap. As the molecules of fat in the milk were drawn toward the soap, the molecules of dye spread across the liquid.

In the fourth project, the eighth-graders took aim with their cell-phone cameras as the Lehigh students used sulfuric acid to set off a slow chemical reaction and build a blue iodine clock.

“I loved seeing the reactions on their faces,” said Leah Tranovich ’16, who is president-elect of the Lehigh AIChE chapter. “That made me realize that the class was much more beneficial for the Broughal students than I had thought it would be.

“Later, while we were cleaning up, Mrs. Cirucci told us that the kids were telling everyone how much they loved science. That made all of our efforts worthwhile.”

Tranovich, who took the lead in organizing the outreach event, said the AIChE members met over the course of a month to plan the lessons, try them out and purchase the required materials.

“I volunteered at last year’s event, and I noticed that the kids were not all paying attention,” she said. “So this year, we decided to make three of the four experiments hands-on.”

Lehigh’s AIChE chapter, said Tranovich, is open to all undergraduate students in the department of chemical and biomolecular engineering. In addition to the outreach event at Broughal, members of the group form pairs, with older students offering advice and tutoring to younger students.

Tranovich is also a member of Lehigh’s Society of Women Engineers (SWE) and the university’s chapter of Tau Beta Pi, the national engineering honorary society. SWE organizes two outreach events each year—CHOICES (Charting Horizons and Opportunities in Careers in Engineering and Science) for middle-school girls and OPTIONS (Offering Possibilities Through Investigating Opportunities in Engineering and Science) for high-school girls. Tau Beta Pi this spring organized a competition for Lehigh engineering students on the lawn in front of the University Center.

Like many Lehigh engineering students, Tranovich has taken advantage of the study abroad and research opportunities offered by the university. Last summer, at the National University of Ireland in Galway, she conducted research involving the optimization of an HVAC (heating, ventilation and air conditioning) system. This summer, she will work as a research and development process engineer for Mars Chocolate North America in Hackettstown, New Jersey.

The AIChE chapter is advised by Mark A. Snyder, assistant professor of chemical and biomolecular engineering. 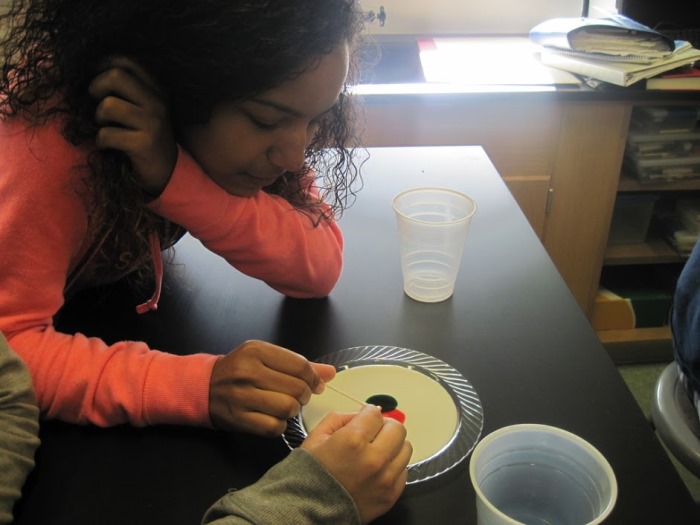 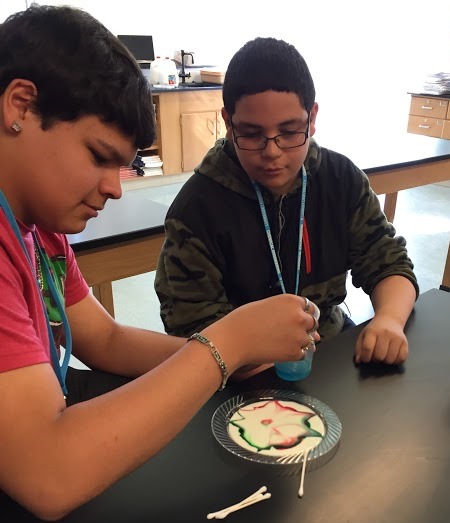 …the students activated the mixture with a dab or two of dish soap. 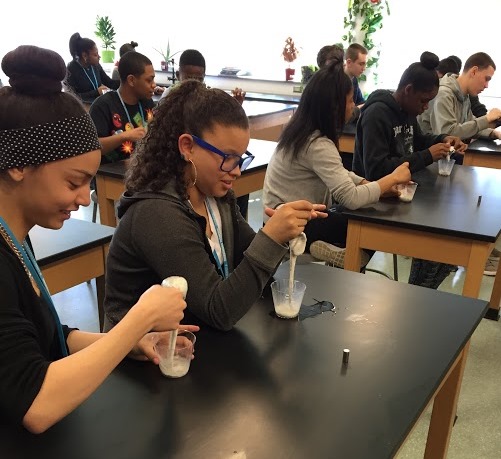 The eighth-graders also mixed borax powder with Elmer’s glue in a lesson about polymers. 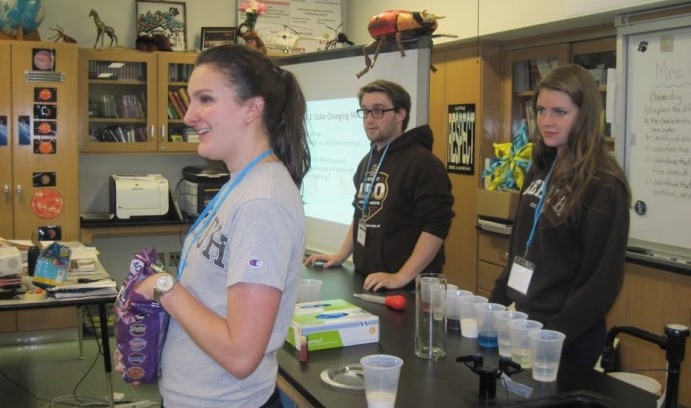 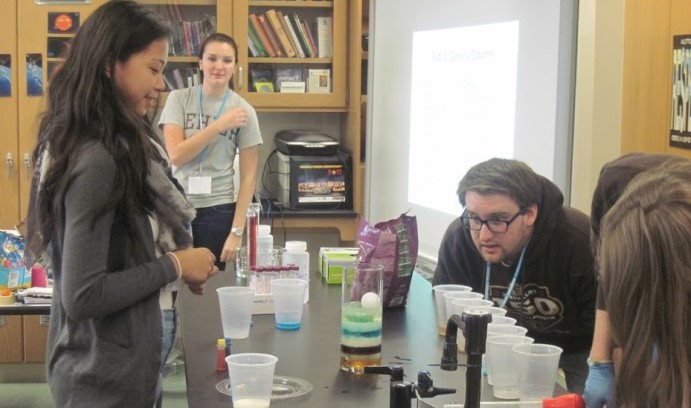 As Tranovich and Cressman look on, Doyle helps a student test an “interactive density tower.” 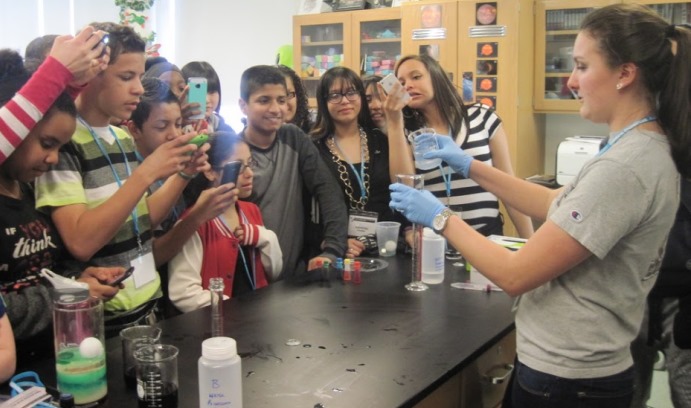 The eighth-graders brace themselves as Tranovich uses sulfuric acid to set off a slow chemical reaction and build a blue iodine clock.